The public’s fascination with Orson Welles continues to grow over the years, much like the man’s waistline in his older age. This is partly by design (the fascination, not the waistline). From groundbreaking visionary and celebrity washout to indie poet and back again, Welles was a man who knew how to spin these very public highs and lows into a personal mythos, and cultivate a reputation as one of the most celebrated American filmmakers to ever pick up a camera — despite having less than a dozen features to his name. He famously quipped that “There’s no biography so interesting as the one in which the biographer is present”, and one always got the sense that he was making us see him as he wanted us to; he was the performance. He told purposely contradictory stories about himself in interviews and biographies. Hell, he convinced the world that it was being attacked by martians in 1938. His smoldering brew of charisma and arrogance were often bigger selling points than his films, which, to further blur the lines, often focused on characters who were tripped up by their charming arrogance.

Welles’s triumphs have been thoroughly covered– Citizen Kane (1941), The Magnificent Ambersons (1942), Touch of Evil (1958), but perhaps more fascinating are his undocumented missteps. The films that, whether through circumstance or Welles’s affinity for gossip, have continued to raise questions regarding how much he contributed behind the scenes. His input on period dramas like Black Magic (1949) and David and Goliath (1960) remains hazy, as are the rumors that he secretly directed scenes in the seminal film noir The Third Man (1950). The most confounding of these “unofficial” Welles movies, however, and the one that sits most comfortably in his filmography, is the 1943 thriller Journey into Fear. 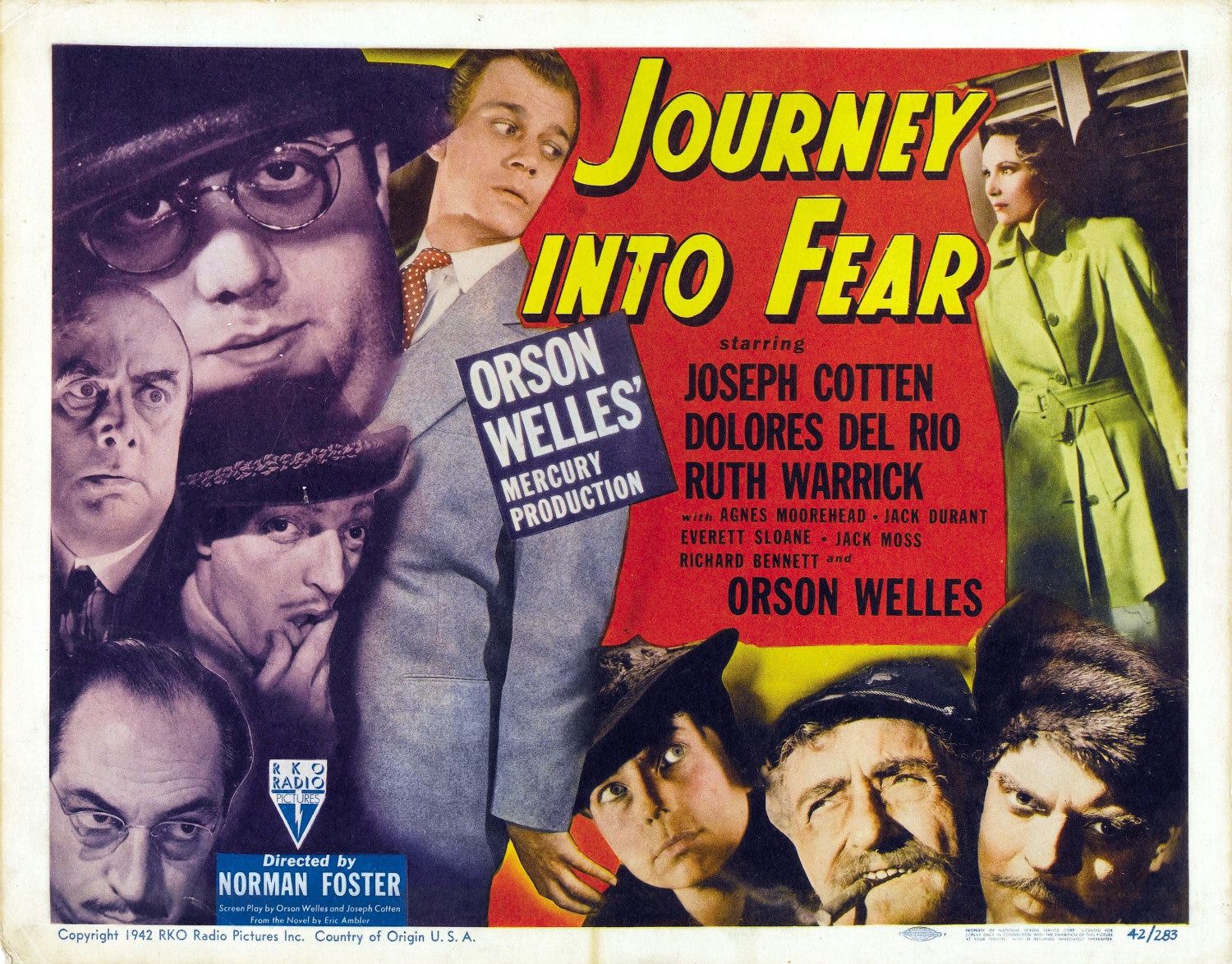 Journey, based on Eric Ambler’s novel of the same name, was certainly off to a promising start. Welles was announced as the director and star of the film in July 1941, and was slated to begin shooting the same year. He tossed out Ben Hecht’s original screenplay and wrote a new one with Joseph Cotten, whom he cast alongside fellow Mercury Theatre players Agnes Moorehead, Everett Sloane, Ruth Warrick and Dolores del Rio. Welles even cast his business manager, Jack Moss, as the film’s bespeckled assassin Banat.

Then, quite suddenly, things went awry. It’s impossible to discuss Journey into Fear without the context of the other film Welles was making at the time, Ambersons. The sprawling period drama earned disastrous feedback during preview screenings in 1942, and RKO responded by cutting nearly forty minutes and slapping on a happy ending. By the time Welles realized what had happened (he was shooting It’s All True in Brazil), the damage, both to the film and his relationship with RKO, had been done. Journey into Fear quickly became an afterthought, a minor inconvenience for Welles to juggle as he tried to regain control of Ambersons. He never did. Feeling defeated, he stepped down from directing Journey and chose Norman Foster, a collaborator on It’s All True, as his replacement. 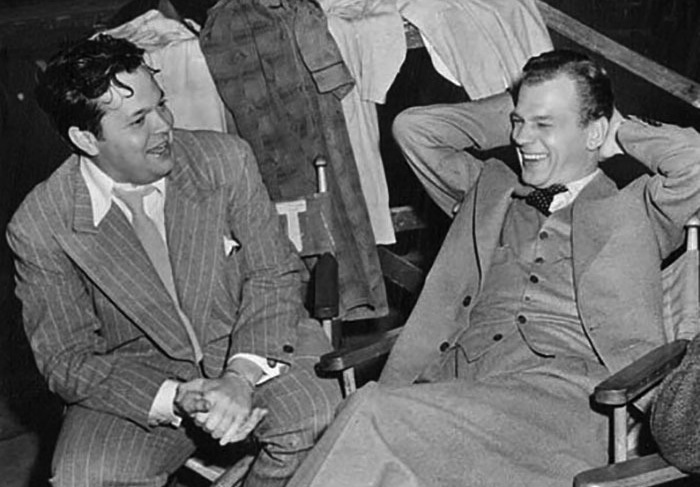 Orson Welles and Joseph Cotten on the set.

That the film credits Foster as the sole director is a gross misnomer, however, given that the pre-credits scene belongs to Welles; as if subtly assuring us his vision of the film haven’t been completely erased. The scene plays out sans dialogue, as we ride a swooping crane shot into a dingy hotel room. Banat loads his pistol carefully, while a skipping record cuts through the silence and compounds the foreboding sense of unease caused by the pistol. It is a masterful showcase, on par with any of Welles’s bits from Kane or Ambersons, despite its comparative obscurity. Sadly, the tension is broken by the opening credits, and by the time we resume, its clear that Foster’s decidedly softer direction has taken over.

The plot of Journey into Fear is a quagmire, a means of placing characters in peril without having to suspend too much belief. The who and why are unimportant, so long as they are relatable and realistic enough to earn our trust. Howard (Cotten) and Stephanie Graham (Warrick) are an American couple traveling in Turkey when they find themselves targeted by Nazis. Howard, it turns out, is a stateside engineer with crucial naval information. An attempt to assassinate him gets foiled in a crowded nightclub, where a chummy local (Sloane) saves them and suggests they seek out the protection of one Colonel Haki (Welles). 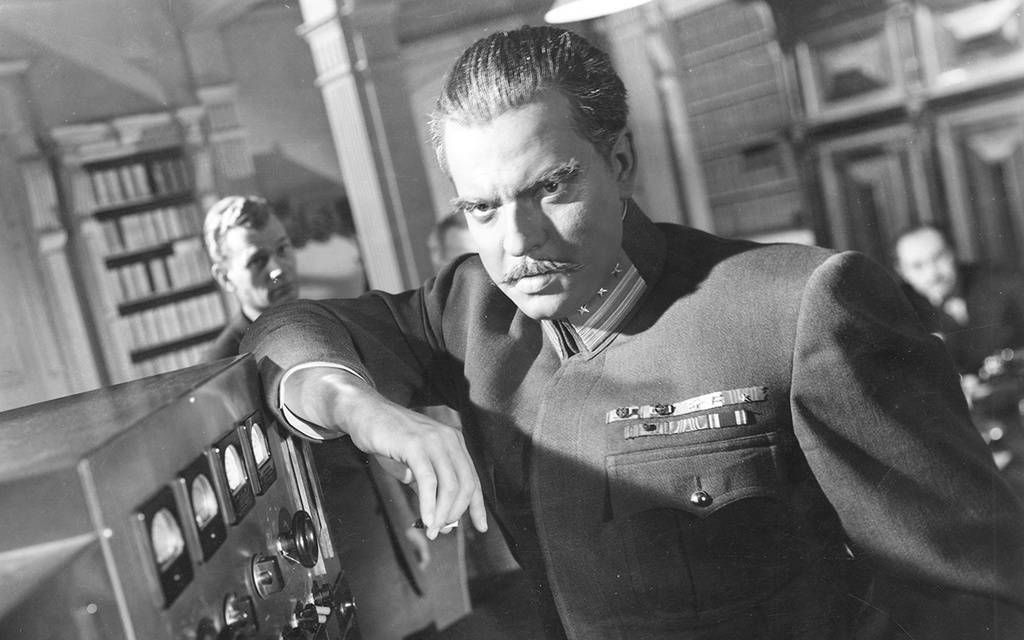 Foster’s direction is noticeably more static than Welles’s, but he does conjure up a decent sense of disorientation in these crowd scenes. The Turkish atmosphere is manic and claustrophobic, putting us directly in the couple’s shoes as they grasp for some semblance of comfort. Howard’s initial meeting with Haki is a joyous sequence, a chance to watch a terrific pair of characters as much as it is a chance for Cotten and Welles to flex their underrated onscreen chemistry. “Ah, you have [the] advantage over the soldier, Mr. Graham,” Haki roars, with enough rumbling bravado to shake the frame, “You can run away without being a coward!”

In a rather lame decision, Howard gets taken from the rest of the cast and boarded onto a steamer ship. It is here, at the onset of the second act, that I suspect many of the cuts were made to shorten the film’s runtime (more on that later). Howard stumbles upon a gallery of potential assassins, each one more suspicious than the next, but their erratic behavior and unexpected forays into comedy make them a pale substitution for Haki and Sloane’s character. Perhaps it is radical shift in setting that is to blame, or some of the bad habits Foster picked up while making campy Charlie Chan mysteries in the 1930s. Welles was later asked if he had any input on these scenes, and his response was predictably cagey: “Well, we all did — whoever was nearest the camera, there was no other way to get it made, because of the difficulties. It was a terrible situation… It was a collaborative effort.” 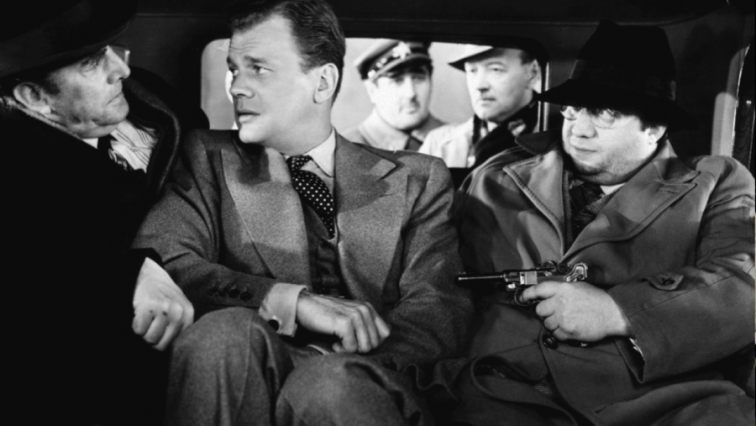 The nature of their collaboration is opened up to further scrutiny when the story gets back on land. The jumbled climax sees Howard and Haki reunite to rescue Howard’s wife (who was kidnapped, conveniently, offscreen) and fight off Nazi agents atop a hotel rooftop. The unmistakably Wellesian rush of elongated angles, tight shots, and gorgeously placed shadows are in full effect here, driving the scene to dizzying heights, before culminating in a shot of Banat tumbling to his death. Cinephiles will note the similarities between the climactic fight and that of Ridley Scott’s 1982 tech-noir Blade Runner. We do not know if Scott is paying direct homage, but it is an eerily similar nonetheless.

The original film ran about 90 minutes, according to Welles. But seeing as Ambersons cost RKO money and debuted to lukewarm reviews, the studio had gotten tired of their one-time wunderkind. They fired Welles after seeing Journey and trimmed it down to an anemic 68 minutes before dumping it in theaters. “It was horrible what they did with it,” he later said, “Because it was quite a good script that we did it should have been a very decent picture.” The film wound up losing $193,000 at the box office. Welles, meanwhile, had finally let his reputation get the best of him. The image of him as the arrogant genius had worn out its welcome, and the result was not one, but two of his films taken away and ruined. He would not direct again until 1946’s The Stranger. 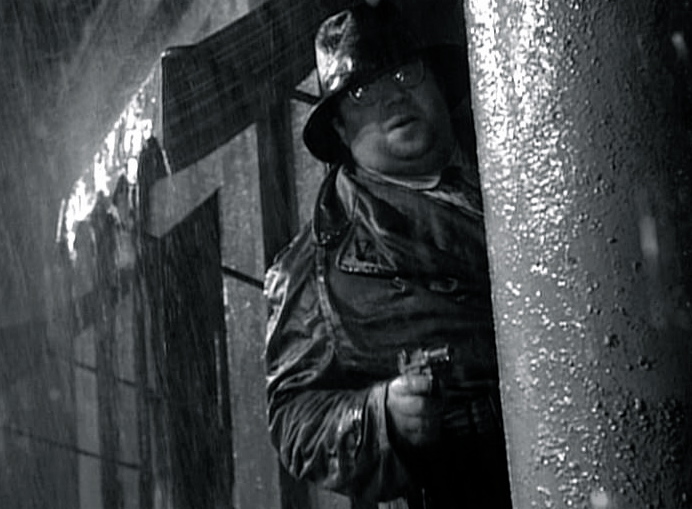 Banat attempts to take out Howard out.

I’m not going to sit here and pretend that Journey into Fear is some lost masterpiece. It’s flighty and inconsistent, and the lousy editing drops it well below the standard set by Kane and Ambersons. Welles is distracted and handicapped here, and it shows. Later in life, he tried to distance himself from the film, which is understandable given the low point in his career that it represented. It’s one of the few instances where the Orson Welles narrative was not his to make up.

Still, there are moments of clarity that warrant its inclusion, at least in this writer’s humble opinion. The highlights of Journey into Fear serve as a crucial transition from the baroque flourishes of Welles’s first two films to the gritty poetry of his later works. The climactic fight prefaces the brilliant clock tower scene in The Stranger, just as the pre-credits teaser would eventually blossom into the virtuoso opening of Touch of Evil. For Welles completists and casual fans alike, it is a fascinating watch– a cinematic demo from which future classics were influenced.

TRIVIA: Welles and Dolores del Rio, who had been carrying on an affair for several years, ended their relationship shortly after the film’s release.