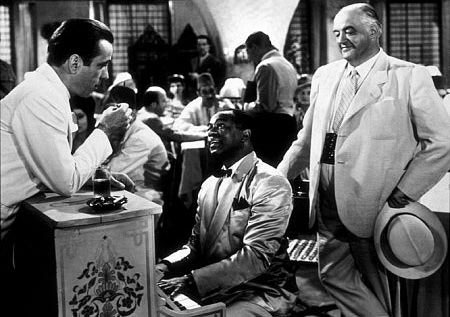 Other Nominated Films:
For Whom the Bell Tolls, Heaven Can Wait, The Human Comedy, In Which We Serve, Madame Curie, The More the Merrier, The Ox-Bow Incident, The Song of Bernadette, Watch on the Rhine

Casablanca is a unique film in many ways. For one, it only won three Academy Awards. You have films like Ben-Hur which won 11 Oscars, All About Eve which was nominated for 14 and won 6, and plenty of other films that were nominated and won more Oscars than Casablanca. Also, Casablanca is a relatively short film — the shortest of the Top 10 on this countdown (should note that Marty is the shortest film in history to win Best Picture at 90 minutes). Then, you have epic films like Ben-Hur (again), Lawrence of Arabia, Gone with the Wind, and all of them are great in their own ways. And finally, Casablanca was nominated for two acting awards, but came out empty handed. Humphrey Bogart would go on to lose to Paul Lukas in Watch on the Rhine and Claude Rains would lose to Charles Coburn in The More the Merrier.  Casablanca‘s storyline revolves around Rick Blaine (Bogart), a cynical American living in Casablanca in 1941. Rick runs a swank nightclub/gambling den known as “Rick’s Café Américain.” The joint attracts people of all kinds: the Vichy French, the Italians, and the Nazi’s for example. It is also a place where refugees go when trying to escape to the United States — as well as the men who are trying to catch them. Rick tries to keep neutral and detached in all matters involving the war. Petty crook Signor Ugarte (Peter Lorre) comes into Rick’s Cafe and brags to Rick about having “letters of transit” that were obtained through the murder of two German couriers. The significance of these papers is that they allow those who possess them the ability to travel freely around German-controlled Europe and into the neutral land of Portugal from where they could book passage to the United States. These papers would be considered a treasure by any refugees looking to get out of Casablanca.  Ugarte intends to sell the letters to the highest bidder at the club that night. Unfortunately, he is arrested by the local police under the command of corrupt Vichy Captain Louis Renault (Rains). Ugarte dies in custody without revealing to anyone that he had given the letters to Rick. The film really begins to move when Rick’s ex-lover and her husband arrive at the Cafe: Ilsa Lund (Ingrid Bergman) and Victor Laszlo (Paul Henreid). The reason for Rick’s cynical and bitter attitude lies in his past with Ilsa, and this is where I feel I should end.  For those of you who have seen Casablanca, you know that the rest is history…you know that this is the greatest love story ever told on the big screen. For those of you who have yet to see it…well…what are you waiting for? Casablanca is on seven of the American Film Institute‘s top 100 lists: #2 on Movies (although on the revised list it was bumped down to 3), #37 on Thrills, #1 on Passions, #4 on Heroes and Villains (Rick Blaine), #2 on Songs (As Time Goes By), #5, 20, 28, 32, 43, and 67 on Quotes, and #32 on Cheers. But that’s not all — in 2005, Casablanca was named one of the 100 greatest films over the last 80 years by Time.com (the films were not ranked), and in 2006, the Writers Guild of America, West voted Casablanca the best screenplay of all time in its 101 Greatest Screenplays list. I actually rented a book that contained Casablanca‘s screenplay, and I really have to say that it is truly a piece of art. I’ve read about 50 screenplays over the past few years and there are none that even come close to it. I can go on and on about how fantastic Casablanca truly is, but I think you understand what I’m saying. There’s only one way to end this piece, and that’s by giving you a fun fact. One of the most famous magazine publishers and night club owners was inspired by Casablanca. Who is it? you ask? The one and only Hugh Hefner and his Playboy Clubs.*

This entry was posted in Best Picture Countdown, Posts by Josh Kaye and tagged all about eve, american film institute, as time goes by, ben-hur, best picture, casablanca, charles coburn, claude rains, For Whom the Bell Tolls, Heaven Can Wait, hugh hefner, humphrey bogart, In Which We Serve, ingrid bergman, josh kaye, lawrence of arabia, Madame Curie, marty, paul henreid, paul lukas, peter lorre, The Human Comedy, The More the Merrier, The Ox-Bow Incident, The Song of Bernadette, time.com, Watch on the Rhine. Bookmark the permalink.