To Kill a Mockingbird: The Casting of Atticus Finch

A Big Thank You to author Tom Santopietro for hand-picking this excerpt about the casting of Atticus, from his book “Why to Kill a Mockingbird Matters”. This is the first in our two-part series on the filming of To Kill a Mockingbird, courtesy of Tom.

Although producer Alan Pakula and director Robert Mulligan now held the rights to a national best seller, they did not possess the clout to finance the picture themselves. To ensure an adequate budget they needed a star – a big star – one whose presence alone would guarantee not just financing but also distribution. Who possessed both the requisite big name, as well as strong enough acting chops, to believably portray a small town Alabama lawyer circa 1933? In Harper Lee’s mind, only one actor: Spencer Tracy.

Oh yes, Harper Lee certainly liked Spencer Tracy – “I can’t see anybody but Spencer Tracy in the part of Atticus” – and although she had vowed to leave Mulligan and Pakula to their own devices, she soon sent a note to Tracy via the William Morris Agency. Tracy possessed a quintessential all-American face, and as evidenced by his work in Adam’s Rib and Inherit the Wind was clearly at home in court room scenes. Perhaps he was a bit old for the role, but the veteran actor was possessed of such naturalistic acting ability that everyone involved felt enthusiastic about his casting. The idea, however proved a non-starter, because after receiving Harper Lee’s note, Tracy responded that he was busy filming Devil at Four O’Clock with Frank Sinatra and could not even read or think about Mockingbird at the present time.

Gary Cooper? With his inherent decency and strong, silent unwavering morality, Coop would be great, but the idea  never proceeded past the discussion stage because the actor, who had so memorably portrayed small town heroes in High Noon and Mr. Deeds Goes to Town, was sick with cancer, dying in May of 1961 shortly after shooting of Mockingbird actually began.

The month after Tracy’s refusal, Nelle’s literary agent Maurice Crain wrote Alice Lee to explain that Bing Crosby “very much wants to play Atticus.” Although Crosby had proved himself a capable dramatic actor in The Country Girl, his championship box office days were at least fifteen years behind him and – who was really going to believe Bing as a deliberate southern lawyer? Crosby’s diffidence would, it was feared, immediately undercut the hidden but essentially warm and loving layers of Atticus’s character. At that point the name of Robert Wagner was floated, but the then thirty-one year old Wagner lacked the requisite gravitas, and with Universal having signed on to distribute the film, the studio began exerting its own muscle in the casting process. Their first question was a simple one: how about the biggest star at Universal, Rock Hudson?

Hudson, riding high at the box office after appearing in a series of smash hit Douglas Sirk films as well as wildly popular comedies opposite Doris Day, had expressed great interest in playing the role. In fact, he would have brought a solid masculine gentleness to the role, but at heart he seemed to lack the  personal heft required; in casting agent Boaty Boatwright’s words, “Knowing Rock, he had the intelligence and good taste of his own not to fight for it, to know he shouldn’t play it.”

With Hudson out, producer Pakula now spoke up. There was really only one actor he had in mind for the role: Gregory Peck. 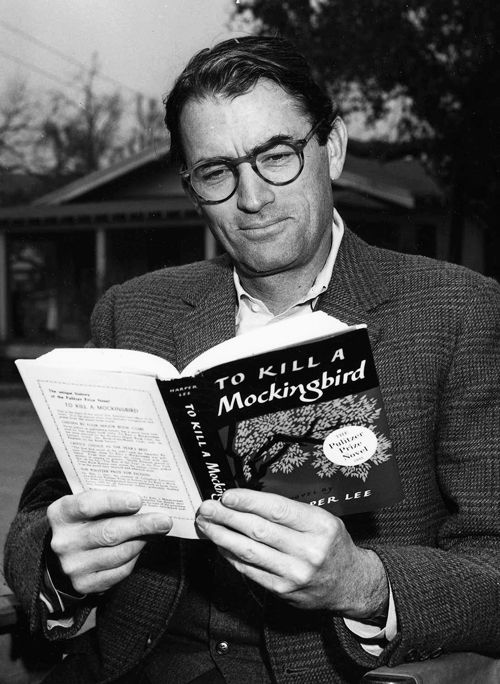 But would Peck – the “perfect Atticus” in Boatwright’s words – be interested in a story that had no romance, no violence, and little action? Already an admirer of Pakula and Mulligan’s work on Fear Strikes Out, Peck agreed to read the by now much talked about novel. Sitting up all night he read straight through to the end, later recalling “I called them at about eight o’clock in the morning and said ‘If you want me to play Atticus, when do I start?… I felt I could climb into Atticus’s shoes without any play-acting, that I could be him.” A devoted father himself, he felt a kinship in Atticus’s relationship with Scout and Jem, and his own small town childhood memories came flooding back: the one parent household, the longing for home – Peck felt it all in his bones, instinctively knowing he was right for the part.

The Academy Award nominated Peck carried far more weight and experience in Hollywood than either Mulligan or Pakula, and aware of the fine performance Mulligan had drawn out of Tony Curtis in The Great Imposter, and trusting the artistry of both producer and director, he agreed to sign on. Just as Nelle had formed her own company, Atticus Productions, as a tax shelter, Peck now incorporated his own production entity, Brentwood Productions, to function as one of the film’s producers. In a move of even more import, however, because of his stature and power within the industry, he was able to demand that the final cut of the film reside with Mulligan and Pakula; it proved to be a key creative provision neither producer nor director would have had the clout to insist upon.

The thoughtful, analytical Peck did in fact fit Atticus like a glove – even his limitations as an actor worked for this role. He might have been entirely too dignified for the displays of mischief which made a Cary Grant or William Powell so beloved, but just as Atticus always seemed to be wearing a three piece suit even when home at night, Peck himself often looked a bit stiff on film; somehow, if the scene called for him to appear shirtless he still seemed to be wearing a coat and tie. The role of a thoughtful man of principal fit into his wheelhouse beautifully. Says film scholar Jeanine Basinger: “The right man landed the role. Spencer Tracy was a marvelous actor but he would have been a more shambling, ambling Atticus. Gregory Peck had a majestic, untainted quality which suited the character perfectly.” And true to his own character, he would not just help produce the film, but also have a say in casting, sign off on the script, and all along the way display his creative muscle, albeit in the most gentlemanly of fashions.

“It’s somehow fitting that the greatest movie ever made about fatherhood is told through the eyes of a child… children literally look up to their parents with the unquestioning belief that they hold all the answers. They seem 10 feet tall. To Scout Finch, her father seems even taller than that. And as played by Gregory Peck, he is.” — Film critic Chris Nashawty on To Kill a Mockingbird

“I was sitting next to Gregory Peck at a luncheon for Quincy Jones. I didn’t know what to say. I finally turned and said: ‘So how’s Scout doing?’ Because it’s in my brain – because he will always be Atticus to me.” — Oprah Winfrey

Hope you enjoyed this excerpt!

Here’s a short trailer about the book, narrated by author Tom Santopietro:

And, for those of you who weren’t lucky enough to win our contest, you can order the book on amazon by clicking the link below:

3 Responses to To Kill a Mockingbird: The Casting of Atticus Finch