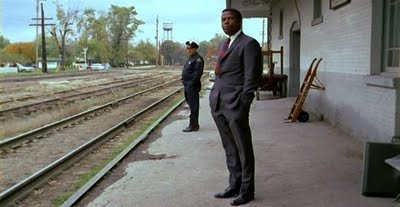 Prior to compiling this countdown list, I’d never seen a Sidney Poitier movie. I knew who he was, and I knew about the profound effect he had on movie history — but I never had the opportunity to see one of his films.  You could say that Poitier was the first major black movie star — he was the first black actor to be nominated for a competitive Academy Award (The Defiant Ones); he was the first black actor to win the Best Actor award (Lilies of the Field); he played roles that defied previous racial stereotypes; and by 1967 he was a MAJOR box office draw.  With that being said, I’m glad In the Heat of the Night was my first Poitier film. And I’m glad that my first two memories of Poitier will be his delivery of the iconic line, “They call me MISTER Tibbs!”, and his performance, as Mr. Tibbs, reacting to being slapped by a white man — by slapping the white man right back. Wow. While Poitier gives one of the most powerful performances I’ve ever seen, in my opinion he’s actually topped by his co-star, Rod Steiger (and that’s saying a lot). Steiger is just so convincing and so stinging in his portrayal of the arrogant and prejudiced Police Chief Bill Gillespie. In a way, In the Heat of the Night could be considered a character study of two men, of different races, who are on the same mission with the same goal. And although Tibbs and Gillespie start out on the wrong foot and use different methods to solve crime, they eventually put their differences aside and work together. Steiger would go on to win the Academy Award for Best Actor, while Virgin Tibbs would go on to be ranked as one of the top 50 heroes by the American Film Institute.

Nominated for 7 Oscars, Winner of 5 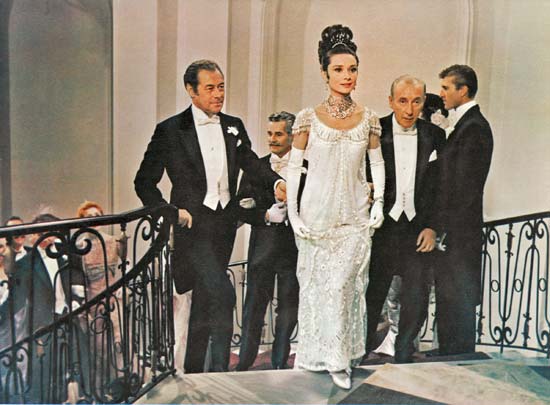 Other Nominated Films:
Becket, Dr. Strangelove, or: How I Learned to Stop Worrying and Love the Bomb, Mary Poppins, Zorba the Greek

In my humble opinion, My Fair Lady is the best musical ever! I can’t speak for anyone but myself here, but that’s how I feel. The last time I enjoyed a musical this much (before working on my Best Picture countdown) was the first time I saw the 2001 version of Moulin Rouge!. My Fair Lady features extremely fun music, beautiful set designs, a perfect cast, and… it’s just really great! It really is! I am also a very, very big fan of Audrey Hepburn, who I feel stole the show.  While she may not have sung her own songs (dubbed by Marni Nixon except for a portion  of “Just You Wait”), I feel that she deserved to at least be nominated for the Academy Award for Best Actress. Which now brings me to her co-star: Rex Harrison. I absolutely hated him as Henry Higgins. But that was the point. Higgins isn’t supposed to be a character that is at all charming or likable. He doesn’t even sing in the movie; he just talks his way through each of the songs! But you know what? He plays the part so well — and his chemistry with Hepburn is tough to match. I would just like to give an honorable mention to Dr. Strangelove, primarily due to the fact it’s my favorite Stanley Kubrick film, and if it was released in any other year, it would have been worthy of a win.

This entry was posted in Best Picture Countdown, Posts by Josh Kaye and tagged audrey hepburn, Becket, best picture, Bonnie and Clyde, Doctor Dolittle, Dr. Strangelove or: How I Learned to Stop Worrying and Love the Bomb, Guess Who's Coming to Dinner, in the heat of the night, josh kaye, just you wait, Lilies of the Field, marni nixon, Mary Poppins, moulin rouge, my fair lady, rex harrison, rod steiger, sidney poitier, stanley kubrick, The Defiant Ones, The Graduate, Zorba the Greek. Bookmark the permalink.