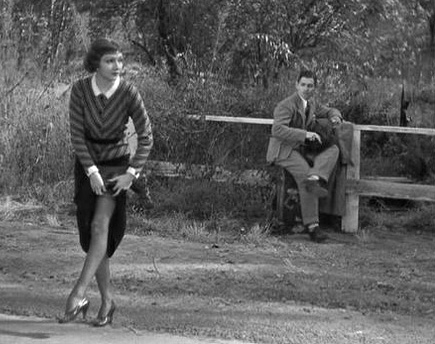 Other Nominated Films:
The Barretts of Wimpole Street, Cleopatra, Flirtation Walk, The Gay Divorcee, Here Comes the Navy, The House of Rothschild, Imitation of Life, One Night of Love, The Thin Man, Viva Villa!, The White Parade

After reviewing 32 movies, we’re finally down to the Top 10. What better way to begin the Top 10 than with the Frank Capra classic, It Happened One Night. It Happened One Night is one of the best romantic comedies ever to hit the Silver Screen, and one of the last romantic comedies to be filmed before the enforcement of the Hays Code in 1934. It Happened One Night features Claudette Colbert as spoiled heiress, Ellen Andrews, who runs away from her father (Walter Connolly) because he wants to annul her brand-new marriage to gold digger aviator King Westley (Jameson Thomas).  Ellie attempts to reach New York City to meet up with husband Westley, and, on the way, crosses paths with Peter Warne (Clark Gable), an out-of-work street-wise newspaper reporter.  Peter discovers Ellie’s true identity and, seeing this as a golden opportunity to get his job back, Peter tells Ellie that he will get her to Westley in exchange for her exclusive story.  Along the way, Peter teaches Ellie a few “facts” of life, such as how to properly dunk a donut, how to hitch hike correctly (Peter actually learns something from Ellie here instead!), and how to give someone a proper piggyback ride. Also, along the way, we meet some fabulous character actors, including Roscoe Karns who plays Oscar Shapeley (“Shapeley’s the name, and that’s the way I like ’em”) and Alan Hale Sr. who plays Danker (singing “Young people in LOVE are very seldom hungry…”). The historical context of It Happened One Night is also something to note. It Happened One Night was released in 1934, in the midst of The Great Depression – and although the movie is not about the Depression, the Depression’s impact on the story is prevalent. Ellie has to pawn her wristwatch to buy her clothes, Peter and Ellie spend the night in a cheap autocamp (sharing a room and rationing food), a lady bus passenger faints from hunger, Peter and Ellie are hungry and have no money left to buy food or pay for their lodging…And yet, among all of this hardship, Ellie finds true love and happiness! It is interesting to note that several actors and actresses turned down the lead roles, and Gable and Colbert were also reluctant and quite weary about participating. It has even been said that, after filming was complete, Colbert complained to her friend, “I just finished the worst picture in the world.” That being said, there is a bit of a ‘story’ behind Claudette Colbert winning Best Actress for her role as Ellie. Colbert was so certain that she wasn’t going to win the award, she decided to take a cross-country railroad trip. When she won the award, studio chief Harry Cohn sent someone to drag her off the train (which luckily hadn’t left the station yet) to take her to the awards ceremony. It Happened One Night would go on to win all the Academy Awards it was nominated for, and would become the first film ever to win the “Big Five” (Best Picture, Best Director, Best Actor, Best Actress, and Best Writing; this would happen only twice afterwards (to date).

Peter Warne: Behold the walls of Jericho! Uh, maybe not as thick as the ones that Joshua blew down with his trumpet, but a lot safer. You see, uh, I have no trumpet.