One of the most popular locations in Western movie history is Lone Pine, California. Lone Pine is a small town located along Highway 395, a few hours north of Los Angeles.

Early in the 20th century, when silver mining ended further north on the 395 in Bodie, California, business dried up for many of the Lone Pine ranchers and farmers whose businesses supported Bodie. Farming was also diminishing in the area as water was diverted to Los Angeles.

Lone Pine is best known for the distinctive Alabama Hills rock formations just outside of town, but movie companies also soon realized it was an easy drive from Lone Pine to Death Valley, which offered a completely different “look.” Other interesting locations near Lone Pine include the small town of Keeler, seen in the silent classic Greed (1924), and Dolomite, a ghost town used in Alfred Hitchcock’s Saboteur (1942).

Spainhower eventually owned Anchor Ranch south of town, which for many years featured a Western town set dubbed Anchorville, with views of Mount Whitney and Lone Pine Peak towering over one end of the street. The ranch also provided a hacienda set, built with lumber left over from Gunga Din (1939) sets!

In short, Lone Pine provided movie studios a “one-stop shop” with a variety of locations and services, with Westerns and desert adventures being the predominant genres filmed in the area over the years.

The first full-length feature film shot in Lone Pine is believed to be Fatty Arbuckle’s The Round-Up (1920). Over the past century literally hundreds of additional movies and TV Westerns have been filmed in the area, with the films ranging from beloved “B” Westerns starring the likes of William “Hopalong Cassidy” Boyd and Tim Holt to major “A” productions.

Today filming in Lone Pine is much rarer than in the glory days of the Western, though it does still occur, with a notable example of the past decade being Iron Man (2008), the first film in Marvel’s hugely popular movie series.

For the past three decades, Lone Pine has hosted a film festival; the 29th edition will take place in October 2018. The festival is unique in that attendees can watch a movie and then minutes later be standing where it was filmed! It’s an experience I highly recommend to my fellow classic film fans, particularly those who share my love for Westerns.

Lone Pine’s Western film history is a rich topic which I’m sure I’ll return to in the future. Here are just a small handful of the many Westerns which have been filmed in Lone Pine over the years:

Over the years countless films in William Boyd’s Hopalong Cassidy movie series were filmed in Lone Pine. The Devil’s Playground is a particularly good exemplar of how Lone Pine was used in these films. In the opening scenes Hoppy (Boyd) and his friends Lucky (Rand Brooks) and California (Andy Clyde) ride through the Alabama Hills, calling the area by the film’s title name, the “Devil’s Playground.” Seen at twilight, the rocks do indeed look spooky, as the trio discuss the possibility of ghosts! Mack Stengler was responsible for the film’s black and white photography. 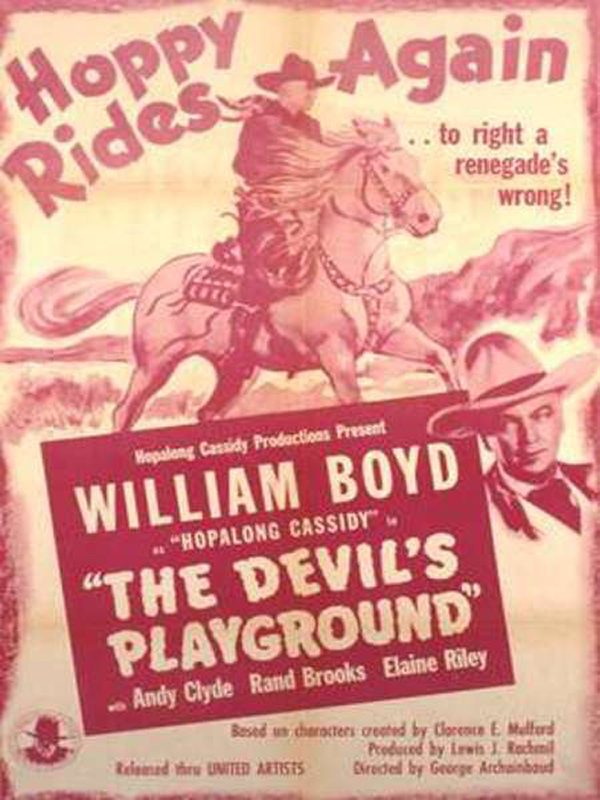 Nervous California is later convinced he hears a ghost, but it turns out to be a young woman (Elaine Riley) on the run. (She refuses to divulge her identity and is thus simply addressed as “Miss” for most of the movie.) Hoppy and pals eventually rescue her from the clutches of a dastardly judge (Robert Elliott) and also help her husband Curly (Ned Young), who was framed by the judge for a robbery. A fellow blogger made me aware that the “cave” Curly hides in late in the film was actually formed with a dark backdrop hung over some of the rocks! It’s an ingenious low-budget solution which is very effective.

Another nice Lone Pine connection: Actress Riley was long married to Richard Martin, who played Tim Holt’s pal Chito in so many films shot in the area.

Yellow Sky is a wonderfully atmospheric Western which makes full use of the Lone Pine area. It starts out with a group of outlaws, including “Stretch” (Gregory Peck) staggering across Death Valley, then they arrive at a desert ghost town (and all-important waterhole!) in the Alabama Hills. 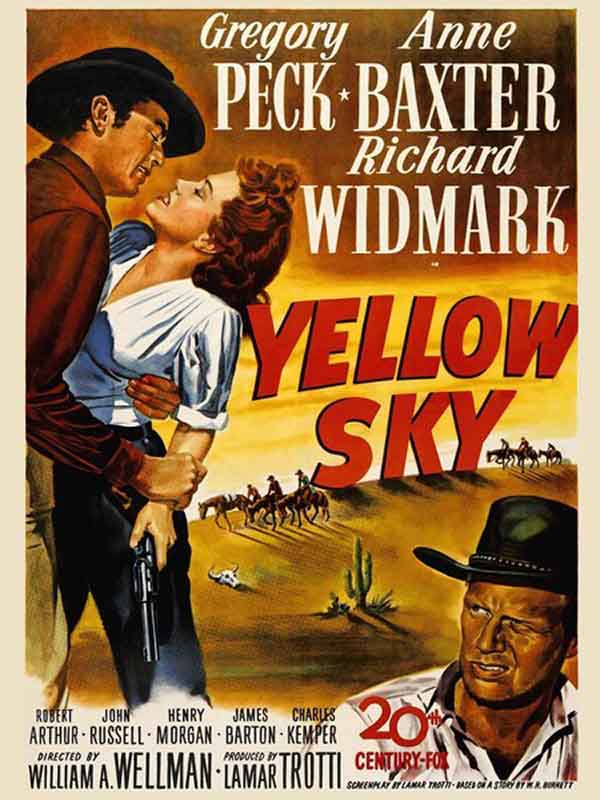 It’s a hugely enjoyable film in the tradition of several other films of the late ’40s in which an outlaw or gunslinger is reformed by the love of a good woman. The woman, in this case, is Anne Baxter, the sole occupant of the ghost town other than her prospector grandfather (James Barton). Richard Widmark plays Dude, who constantly tests Stretch’s authority. The cast is rounded out by Charles Kemper, John Russell, Harry Morgan, and Robert Arthur. 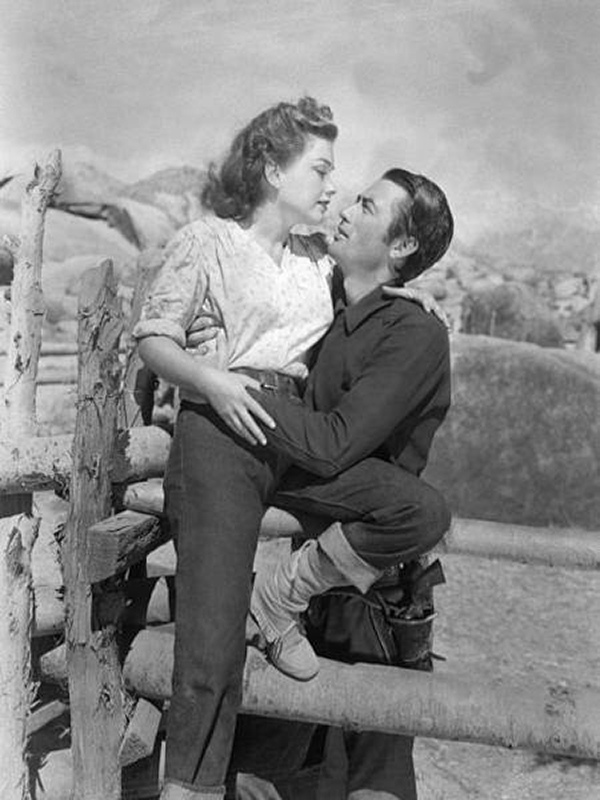 The movie was shot by Joe MacDonald, whose work also included John Ford‘s My Darling Clementine (1946), and the visuals are superb, whether it’s the line of outlaws riding through Death Valley or the cloud-filled skies above the Alabama Hills.

William Wellman Jr. gave a talk at UCLA in 2015 in which he recounted being on the film’s Lone Pine sets at the age of 11. One of his favorite memories was trying to find a way to be “in” the movie without anyone realizing he was on screen. He climbed into a hayloft which would be in the background of a shot and covered himself with hay — so when you see the film, know that there’s an unseen little boy hiding in the picture! The barn and house were constructed for the film, incidentally, along with watering hole.

Rawhide is another favorite movie filmed in Lone Pine. It’s a suspenseful Western which loosely remade a gangster movie titled Show Them No Mercy! (1935). Tyrone Power plays a newcomer to the west who’s getting hands-on experience running a stagecoach station; Susan Hayward plays a passenger traveling with her toddler niece (Judy Ann Dunn) who takes refuge at the station when word spreads that a gang of outlaws are on the loose in the area. Unfortunately said outlaws (Hugh Marlowe, Dean Jagger, Jack Elam, and George Tobias) arrive at the station and take it over, intending to rob a gold shipment due on a stagecoach; a tense hostage drama ensues. 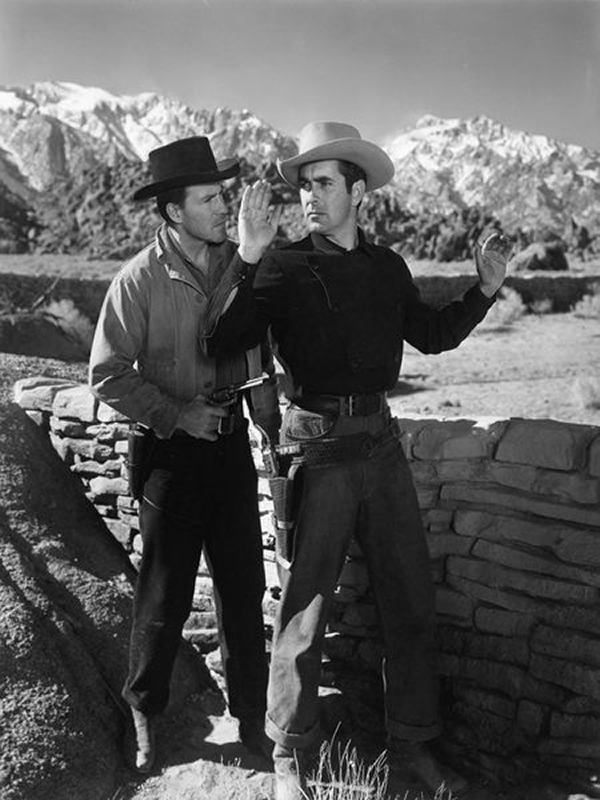 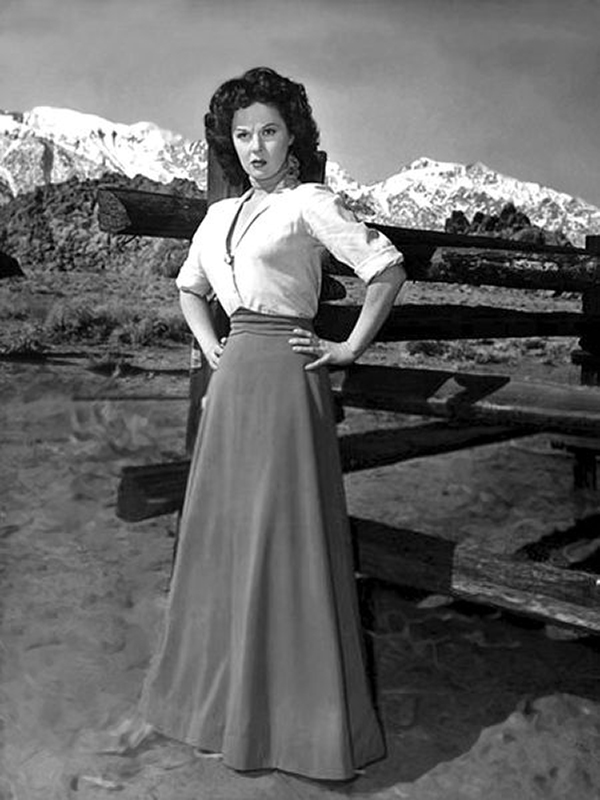 Milton R. Krasner did the excellent cinematography. The Alabama Hills locations of the stagecoach depot and a burial spot are still quite easy to find today; the distinctive round rock where Power and Hayward kneel to pray after burying a friend is still there, looking just as it does in the movie. Incidentally, Power worked in Lone Pine on several occasions, including Brigham Young (1940) and King of the Khyber Rifles (1953), and he is still fondly remembered in town today as a nice guy who was happy to mingle with the local citizens. 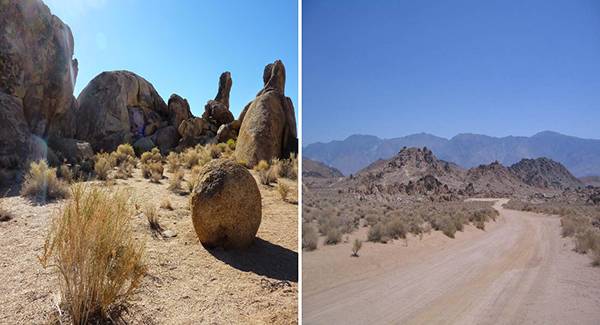 7 Men From Now is one of the best films in the collaboration between Western star Randolph Scott and director Budd Boetticher, and it’s probably also one of the most beloved movies shot in Lone Pine. In economical yet striking fashion this beautifully scripted 78-minute film tells the story of a former sheriff (Scott) on the hunt for outlaws who killed his wife during a robbery. During his travels, he meets a struggling pioneer couple (Gail Russell and Walter Reed) and an old enemy (Lee Marvin, in a charismatic performance).

The film makes good use of a variety of local locations, filmed by William H. Clothier; some of the wagon scenes were filmed along a creek, in a tree-filled area which is near the Alabama Hills yet looks completely different, other than the familiar mountain range in the background. The final confrontation between Scott and Marvin was filmed deep in the hills, in an area known as the “Cattle Pocket”; the rocky location and the unusual editing of the fast-draw sequence, combined with the playing of the actors, make it unforgettable.

Rory Calhoun and Victor Orsatti produced this brief but entertaining 64-minute Western, largely filmed in the Alabama Hills. Its finest attribute is its black and white CinemaScope photography by Harold J. Marzorati, with sweeping vistas of the mountains and hills; there are some soundstage shots mixed in but for the most part this movie was filmed in the great outdoors.

Rory Calhoun and Anne Francis in The Hired Gun (1957).

The storyline is necessarily quite basic yet every time I see this film I appreciate it more. Ellen Belden (Anne Francis) is due to be hung for the murder of her husband, but she’s sprung by Judd Farrow (Chuck Connors) and flees to New Mexico. Her father-in-law (John Litel) hires gunman Gil McCord (Calhoun) to get her back to Texas for the hanging; as they travel, Gil starts to have doubts that she’s a murderess. And why is her brother-in-law (Vince Edwards) so determined that she die? Calhoun and Francis are excellent leads in a well-told story, as Gil searches for the truth. This is a “darn good Western” in a beautiful setting. 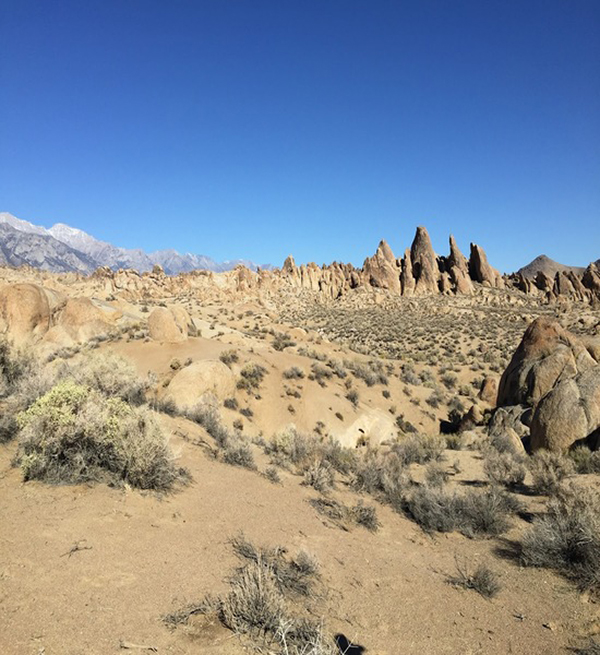 A breathtaking location for the filming of Hired Gun (1957).

The photographs of the Alabama Hills accompanying this article are from the author’s personal collection.

Laura can be found at her blog, Laura’s Miscellaneous Musings, where she’s been writing about movies since 2005, and on Twitter at @LaurasMiscMovie. A lifelong film fan, Laura loves the classics including Disney, Film Noir, Musicals, and Westerns.  She regularly covers Southern California classic film festivals.  Laura will scribe on all things western at the ‘Western RoundUp’ for CMH.