Posted on July 21, 2018 by Hutchinson, Founder of The Vitaphone Project

The early months of 1928 saw the transition from silent pictures to talkies ramp up big time. After The Jazz Singer premiered in October 1927, Warner Bros committed to releasing virtually all of its features with a synchronized soundtrack using their Vitaphone sound-on-disk process. But that does not mean those films including any talking. In fact, few did. 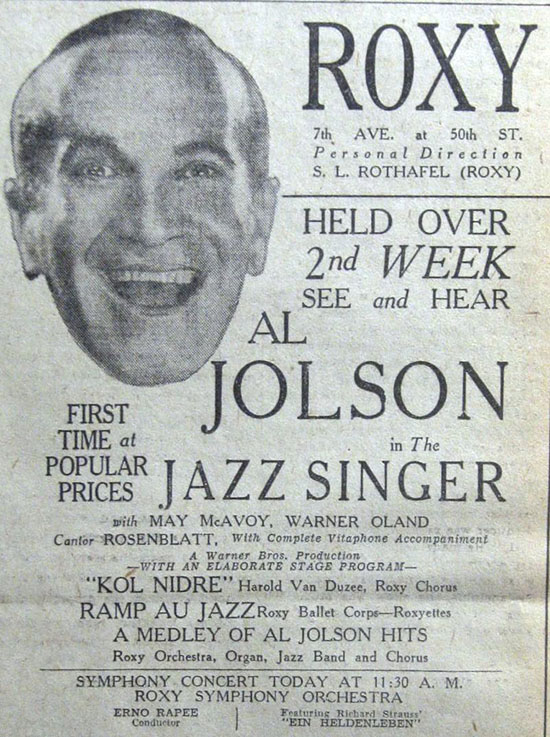 The beginning of 1928 also saw all of the other major studios, including MGM, Paramount, First National and Universal, banding together in an agreement that essentially said they would take a wait-and-see attitude to gauge the public’s reaction to talkies. None of them would switch to sound unless all of them did.

The wait was very short.

By spring, it was clear that the public wanted sound, and only Warner Bros and Fox (with its sound-on-film process) were giving it to the public. So over the next six months, each of the other studios began to transition to talkies. But most were still not talkies at all. The overwhelming number of features released “with sound” had no dialog. Instead, custom recorded synchronized music and sound effects soundtracks were created. From a marketing standpoint, the studios already recognized that advertising a picture as “With Sound” meant a mediocre film would likely do much more business than a superb silent.

Exhibitors’ publications like Motion Picture Herald, Film Daily, and Exhibitors Herald World quickly adopted definitions for each type of synchronized film so that theatres would understand what they were getting: 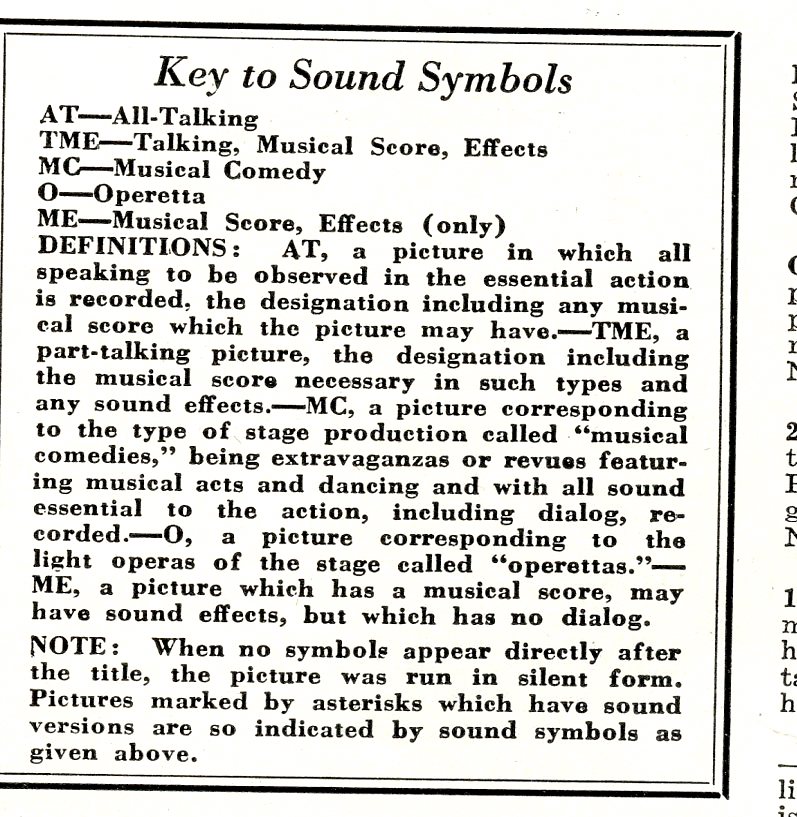 A Key to Sound Symbols for a sound-on-disc film.

“SYNCHRONIZED” or “WITH SOUND” – meant no dialog, just music, and sound effects.

PT or ME – meant “Part Talking” or “Musical score & Effects only”. These were hybrid films, usually already completed as silent, to which dialog scenes were subsequently filmed and tacked on to the silent film prior to release. This allowed studios to advertise such pictures with the “SEE AND HEAR” or “HEAR ___ TALK” taglines without revealing that the picture only had snippets of dialog.

SILENT – no soundtrack of any kind. The best silent features increasingly did poorly at the box office as 1928 progressed.

AT – all talking. This meant there was synchronized dialog and music throughout the entire length of the feature. Studios for awhile often released silent versions of such films in order to accommodate theatres not yet wired for sound. 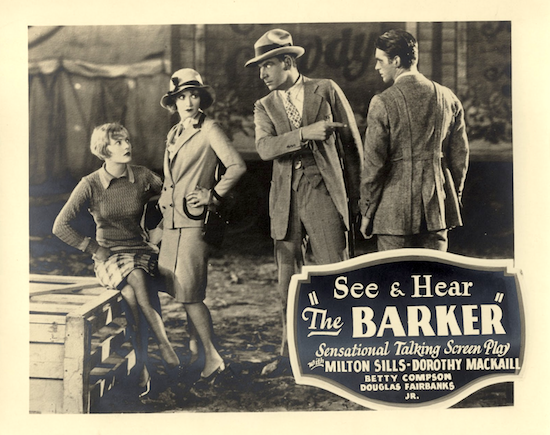 The transition from silent to sound was compressed into only about 30 months, if The Jazz Singer’s release is seen as the starting point, and the end of 1929, with virtually no more silent pictures being produced, as the end. Because of its speed, the studios had over 100 completed or in-production silent pictures during this period, and the need to maximize their box office performance. As such, many already finished silent features received synchronized music-and effects soundtracks before release.

The process for a studio to get a synchronized music and sound effects score created, recorded, then pressed onto disks largely fell to the Victor Talking Machine Company in Camden, NJ. The company was already in the business of pressing 16” soundtrack disks for studios, and since the beginning of the century was the largest producer of commercial 78s for the home. At the beginning at least, only MGM and Warner Bros appear to have done music and effects soundtracks themselves (while still using Victor to press the disks.) Beginning in mid-1928, Victor worked with United Artists, First National, Paramount, Universal, Pathe, and Hal Roach to provide this service. The completed final edit of the film would be shipped to Camden, and Victor’s musical directors (who also led their commercial 78’s recordings) created a custom score to fit the action. A combination of current pop tunes and classical and mood themes would be interwoven into the soundtrack. 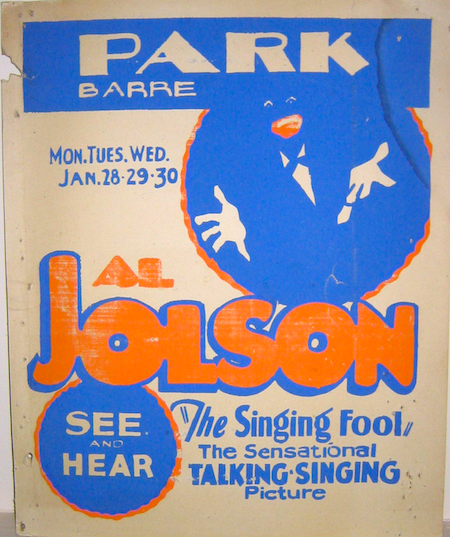 A Poster for The Singing Fool (1928) advertising “See and Hear”.

For a feature-length picture requiring a complete synchronized orchestral score with sound effects, the cost could add $100,000 to the budget. But studios rightly believed that being able to then advertise a film as “With Sound” or “See and HEAR!” would boost ticket sales by much more. 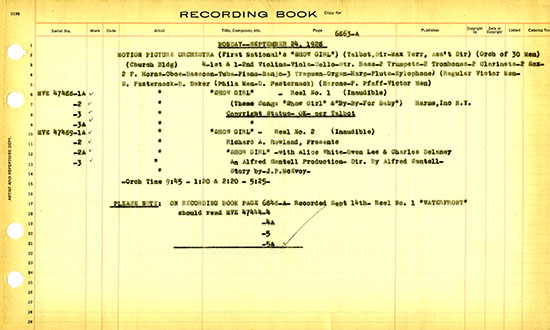 A Victor Ledger for a Charlie Chase film. 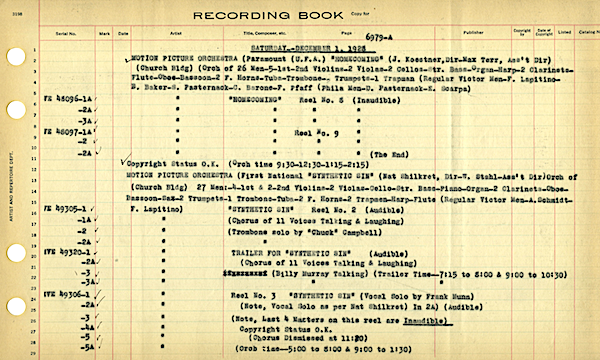 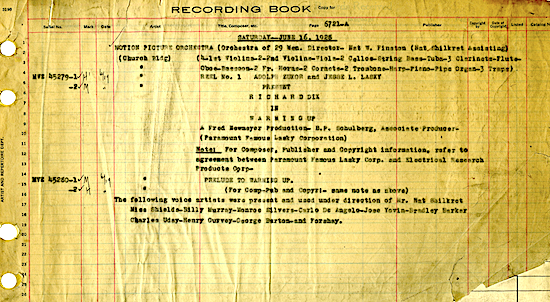 Here is my Vitaphone synchronized soundtrack disk with music and sound effects for Colleen Moore’s next-to-last silent feature Why Be Good? The restored film is available through Warner Archive: 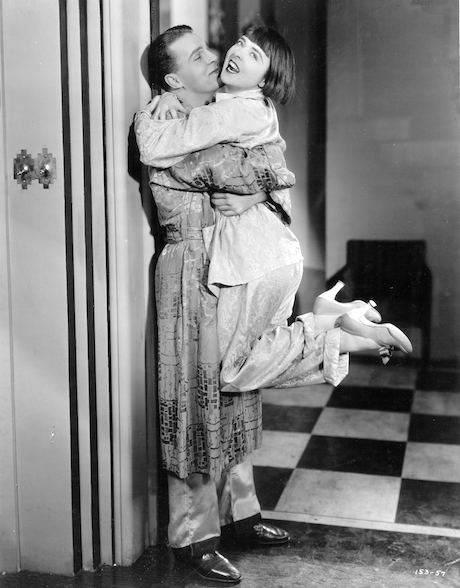 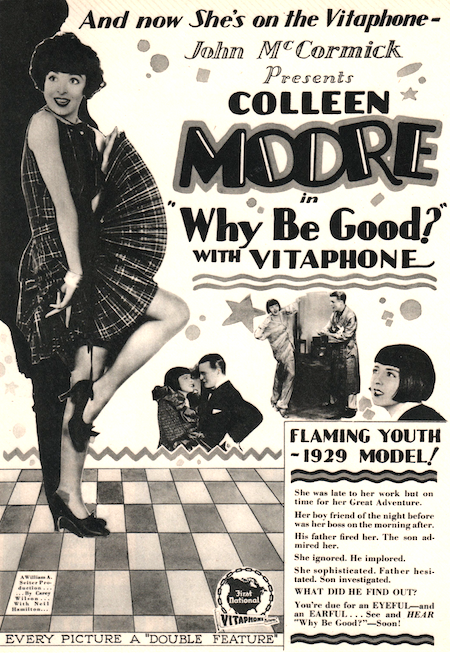 My personal favorite of the disk-scored silent features is one of the very last. It’s Buster Keaton’s final silent picture, Spite Marriage, released in the spring of 1929. The soundtrack beautifully blends appropriate period pop tunes — like “Afraid of You” which applies to his relationship in the film with Dorothy Sebastian — with recognized mood music tunes. This clip demonstrates the masterful original Vitaphone track for this overlooked gem. Towards the end, the tune being played is “We Roll Along, Having Our Ups And Downs” while the pair indeed does just that. 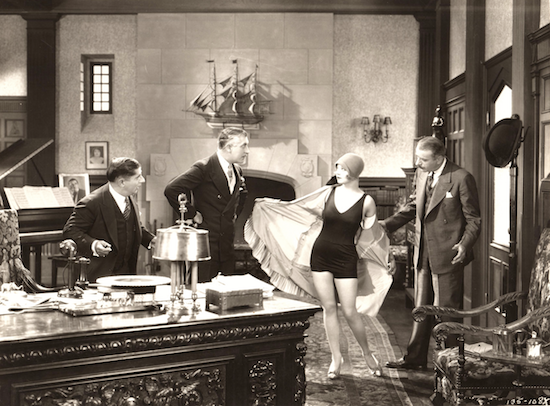 During the past few years, a number of late twenties silent films — long thought lost — have been found. These include Alice White’s 1928 First National features Showgirl and Naughty Baby and Colleen Moore’s last two silent, Synthetic Sin and Why Be Good? Once discovered, efforts began immediately to locate their surviving Vitaphone music and effects soundtrack disks. In all cases, they were found (although Synthetic Sin is missing all but one) and restored with the picture elements. Watching – and hearing – these discoveries as originally released with their intended hot twenties musical accompaniments is the only way to now enjoy them. Any attempt at a modern recreation or score, to me, is sacrilegious. 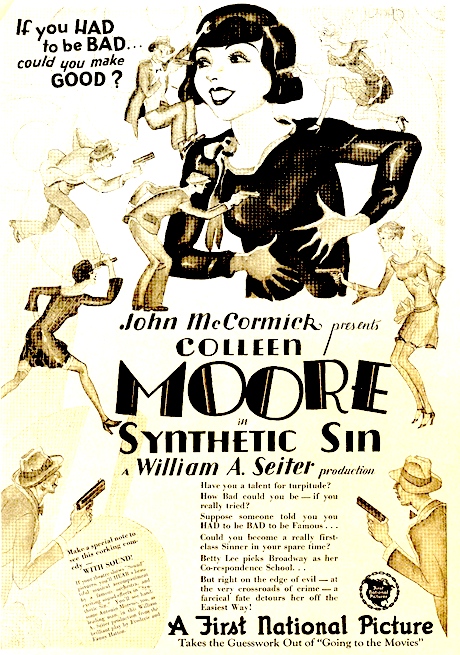