Posted on September 26, 2017 by Hutchinson, Founder of The Vitaphone Project

It has long been recognized that the transition from silent films to talkies was truly a massive revolution, and occurred over a very short period.  In early 1926 every Hollywood film was silent.  By the end of 1929, every short and feature talked.

The revolution required studios to build soundstages and equip them with soundproofing and recording equipment. Complicated logistics were developed to press and then ship tens of thousands of soundtrack disks to theatres and then retrieve them after a film was exhibited. Studios made major changes in their star roster. And over 25,000 theatres nationwide had to pay for wiring their theatres for sound — usually for both the Vitaphone disk and Movietone sound-on-film formats — or else go out of business.

A part of this revolutionary upheaval that is often missed is how talkies changed the snacking habits of theatre patrons. That’s right, snacks!

During the silent era, the snacks of choice sold at theatre concessions were peanuts in the shell and hard candy. These posed no problem when there was no dialog emanating from the screen. But talking picture audiences would not tolerate the munching and shell cracking sounds, especially when the larger theatres could hold 3000 or more talkie fans.

In February of 1929, the National Theatre Supply Company introduced its Peerless popcorn and peanut (shell-less) machines. Before long, theatre concession stands installed their own popcorn machines and a new revenue stream was created.

Concession income was very important to theatres then, as it still is today. In many cases, the income derived from popcorn and candy is significantly higher than that from ticket sales (after the studio’s cut is deducted). 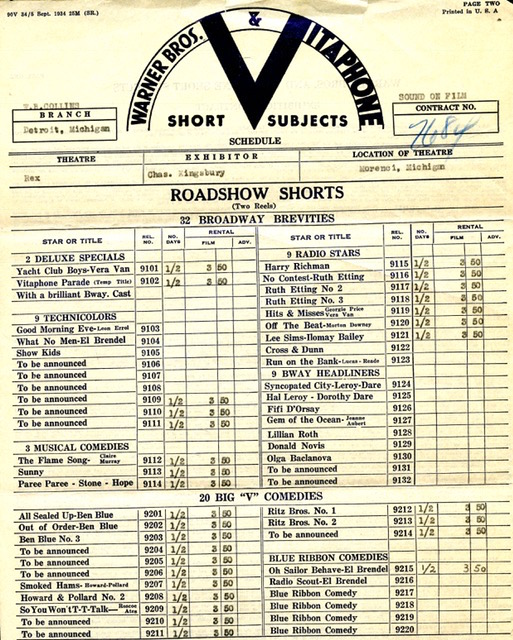 Little has been written about how much each theatre had to pay the studios in order to exhibit a film. The eventually outlawed “block booking” practice forced a theatre to buy a studio’s entire output — clunkers and all — in order to get their “specials” with top stars and assured income.  For those “specials”, the studio would extract a percentage from each ticket sold, in addition to the daily rental charge. As the accompanying photo of a Vitaphone shorts rental agreement shows, a short might rent for $5 a day. Features could cost $25/day plus a percentage of the ticket price. All the more reason that concession income was the lifeblood of most theatres.

So we can thank the dawn of sound for many things, including popcorn and the high cholesterol contributions to society from its alleged “butter”.

This entry was posted in Posts by Ron Hutchinson, Vitaphone View. Bookmark the permalink.