Posted on November 13, 2017 by Hutchinson, Founder of The Vitaphone Project

Most film buffs know how unstable nitrate film is, and how over 90% of black and white motion pictures made before 1930 have decomposed and no longer survive.  The survival rate of films made in the early 2-color Technicolor process is even lower.

The superb and award winning book The Dawn of Technicolor 1915-1935 by James Layton and David  Pierce chronicles that attempts to create color in film was a long and difficult journey. The first feature in the red/green two-color Technicolor process was The Toll of the Sea (1922) and starred Anna May Wong.  Few other all-color silent features were made, with Douglas Fairbanks Sr.’s The Black Pirate (UA/1926) being the best known. Technicolor was largely relegated to brief inserts in otherwise black and white features such as The Merry Widow (1928)  and The Phantom of the Opera (1925). Keaton’s Battling Butler (1926) opened with a brief Technicolor scene, but soon reverted to monochrome. Shorts — especially travelogues and fashion shows — used color more often.

With the coming of sound, the Technicolor Corporation saw its stock and usage rise dramatically. Because of the technology’s use in many sound musicals, more Technicolor footage was used in 1929-30 than in the previous fifteen years combined.  The demand strained Technicolor’s production and quality control capabilities, and sometime less than stellar prints were produced. Technical quality eventually improved by 1931, but by then the Depression led studios to cut back drastically on its use.

But during the peak Technicolor season of 1929-30, audiences could enjoy such all-Technicolor  features as On With The Show (the first all color/all-talkie feature), Gold Diggers of Broadway, and The Rogue Song. Other musicals used key scenes in Technicolor, as in Married in Hollywood, Show of Shows (actually almost 80% color), and Show Girl in Hollywood. Use of color dropped precipitously from 1931-33, with Warner Bros using up its contractual commitment to buy color stock from Technicolor mainly in shorts and just three features. With the perfection of three-strip Technicolor in 1932, studios again began using color more frequently as the process vividly reproduced the entire spectrum.

Technicolor fragment from On With the Show (WB/’29), the first all color talkie feature.

Fast forward to the mid-1950’s. The Technicolor Corporation was holding the original nitrate negatives of  hundreds of two-color titles, mainly from the 1929-32 period. They notified the studios that they needed to pay for them or else they would be discarded. The major studios saw little need for negatives made in the now defunct process. Black and white negatives were kept in some cases but otherwise the color matrices were discarded.  This explains why so much Technicolor material from the early days of sound no longer exists.

Some prints of 1929-30 musicals were still “out there” however, surviving from their original theatrical runs. It fell to dedicated collectors and committed studio personnel to help find and restore whatever Technicolor footage might turn up.

Sometimes — as with the eye-popping all Technicolor 1930 Paramount musical Follow Thru – a complete 35mm nitrate print evaded the ravages of time in great shape, and needed little restoration before it was preserved by UCLA.  Eddie Cantor’s Whoopee! (1930) was found complete — but in an overseas archive. And as reported in my earlier blog, Australia produced some of the most important Technicolor re-discoveries since Hollywood prints sent there for original runs were too expensive to return.  As such, long lost color material for Gold Diggers of Broadway, Mamba and the long-lost Three Stooges color short Hello Pop! were all found “down under”.

The all-Technicolor $2 million Universal production of 1930’s King of Jazz had survived in a pathetically washed out, truncated color print. The faded survivor bore little resemblance to the film’s  crisp and lush initial release. In 2012, a complete original 35mm nitrate print of King of Jazz was found by The Library of Congress. It was extremely fragile, but all there. The Layton and Pierce book cover the details of the film’s restoration, which took several years. Universal’s efforts produced, unquestionably, the most beautiful early Technicolor restoration to date.  Colors are bright and true to the process, and none of the fuzziness seen in some other color films of the period is evident. Screenings worldwide have evoked sighs and applause from audiences.

Recently, and entire, truly beautiful, Technicolor reel of the “Sisters” number from Show of Shows was located at the British Film Institute (BFI). While this footage had survived in black and white, seeing it in vibrant two-color Technicolor is a revelation. In the number, multiple actresses who (mostly) were actual sisters,  appear. 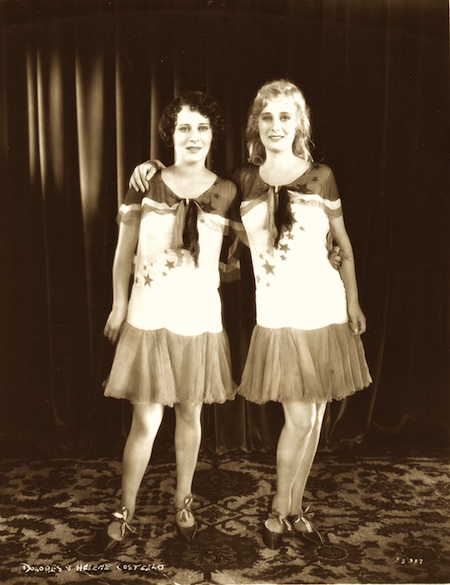 Dolores and Helene Costello in the “Sisters” number of Show of Shows (WB/’29). A beautiful Technicolor 35mm nitrate print was found at the British Film Institute several years ago.

In 2015 and again in 2016, some more amazing,  but also frustrating, Technicolor discoveries surfaced. At a small British museum, two cookie tins with 45-60 second 35mm Technicolor fragments of scenes from 1929 Warner Bros musicals were found. We believe the source of these brief survivors is from children’s toy projectors, which incredibly included some highly flammable strips of film for the kiddies to play with! The fragments were mute, as the sound was on a separate Vitaphone disk. Represented in this cache of discoveries were scenes from On With The Show, Sally, Gold Diggers of Broadway, and Show of Shows. With few exceptions, these fragments were previously unknown to survive in color.

The Vitaphone Project is now working with Warner Bros to repatriate and preserve this footage, and to ultimately get the color footage incorporated into the surviving otherwise black and white features.

With more film rediscoveries in the past five years than the previous thirty, we can only hope that Technicolor continues to be an important part of that exciting trend.

This entry was posted in Posts by Ron Hutchinson, Vitaphone View and tagged King of Jazz, Technicolor. Bookmark the permalink.