Three Wise Girls All Mixed Up

Three Wise Girls (1932) is a rather apt screen title for a book one reviewer for the Studio Relations Committee (SRC) termed: “An exceedingly tawdry and cheap piece of literature designed to thrill a moronic public by its blatant sex detail.”

The SRC obviously didn’t think much of this story. Truthfully, neither did I. I couldn’t get past Jean Harlow as the good girl, despite the sass she brought to the part and, in toning the story down, Columbia placed some clear ethical boundaries on Harlow’s Cassie that came across as rather implausible to me upon my initial viewing. However, after giving the film another go, I eventually pried my focus from Cassie; instead, I found myself absorbed by the way the picture details the perception of love, class, and privilege for viewers during the Great Depression. 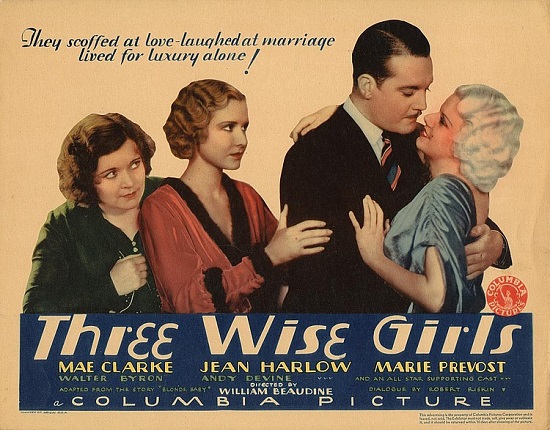 Not gonna lie, this tagline is pretty off the mark.

But first, a summary: Fed up with small-town jobs and small-town sleazy men, respectable gal Cassie (Jean Harlow) moves to the big city in hopes of a better opportunity, like her friend Gladys (Mae Clarke) secured. There, Cassie rooms with Dot (Marie Prevost) and hops from job to job until she lands a gig alongside Gladys as a model. As she navigates city life, Cassie meets a wealthy suitor, Jerry (Walter Byron), who later turns out to be married, and defies Gladys’ advice as her friend heartbreakingly pines after her own wedded beau, Arthur (Jameson Thomas). In the end, two of the three wise girls find happiness; tragedy befalls the other. 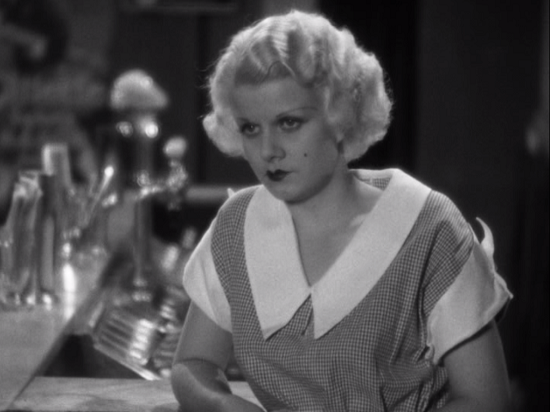 Cassie (Jean Harlow) just wants a comfortable life and some respect, is that so much to ask?

“You better get yourself another soda jerker, Lem.”
Distinctions in social standing pop up throughout Three Wise Girls. In fact, that’s what prompts Cassie to ditch her local soda fountain (and one handsy boss) for a big city soda fountain… and another groping manager. Within the first 3 minutes of the film, Cassie’s mother, Mrs. Barnes (Lucy Beaumont), excitedly comments that Gladys just sent her mother, Mrs. Kane (Kathrin Clare Ware), a beautiful new dress. Lost in thought as she gets ready for bed, Cassie sighs a reply, “Gee, at this rate these shoes aren’t going to last much longer. I can almost put my finger through it now.” The juxtaposition between Gladys’ ‘successful’ life and Cassie’s existence is starkly defined. However, as much as Mrs. Barnes admires Mrs. Kane’s lavish wares, when Cassie expresses an ambition to one day shower her mother with nice things, like a Rolls Royce, Mrs. Barnes assures her daughter that she’s perfectly happy with what they have. Could this piece of dialogue be a pacifier for 1930s audiences? Perhaps. But Cassie, not content with her lot in life, compares her ”respectful” $15 a week to Gladys $200 and gets a notion, cemented when Mrs. Barnes eagerly calls her attention to the new car Gladys bought Mrs. Kane, which just so happens to be parked outside her work. With that, Cassie’s mind is made up – both for her and her mother’s sake. She’s going to New York. 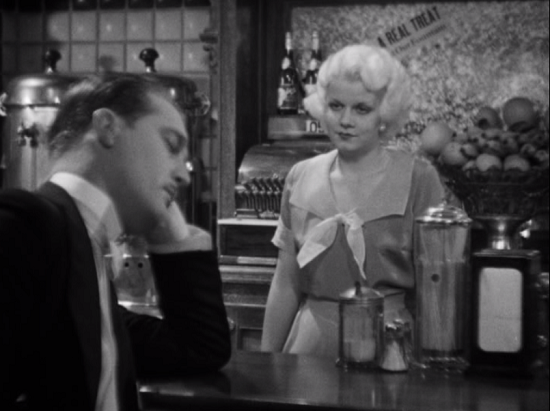 Jerry (Walter Byron) is in need of a Bromo Seltzer stat if only he can keep conscious long enough to drink it.

“What have you got against the world? It seems to be treating you alright.”
Success and wealth don’t just drop in on Cassie’s New York doorstep. Actually, they literally stumble into the soda fountain she’s working at in the form of Jerry (Walter Byron), a man rich enough to nurse his hangover well into the next day without any repercussions. To say they don’t hit it off would be an understatement, but when Cassie lays one on her boss for trying to lay a hand on her and Jerry swoops in with a save, she eventually gives in and lets him drive her home. In the car, Jerry tells Cassie that he’s fed up with his world – the formal dinners, pompous butlers – heck, he even ditched his swank, wild party the night before to get blitzed at a speakeasy. Cassie finds it hard to buy into his “problems” and even harder to swallow the fact that he drops her off at home without making a pass at her. On all counts, Jerry’s certainly not what Cassie expected. And she certainly never expected to fall in love with him, either. 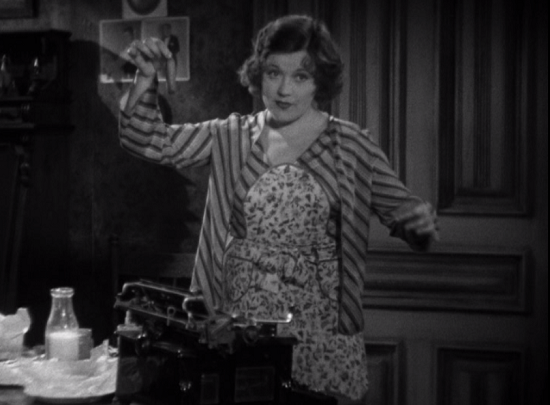 “Aw, there’s one of the finest little weenies that ever graced a paper plate. It’s a little shriveled from old age. But, of course, you can’t have everything.” Ladies and gentlemen, Dot (Marie Prevost).

“Don’t tell me you had dinner at one of those horrible places like the Ritz?”
Cassie stands as a suitable middle in the social barometer between Dot and Gladys, especially when she starts to date Jerry while keeping one foot in Dot’s world and dipping the other in the upper echelons. Her two pals’ focus remains on love and men, but with very different perspectives: Dot spends her days cooped up in their apartment typing envelopes for a living and dreaming of meeting a man – seriously, a plumber will do – to put a ring on it and save her from the monotony and hardship; meanwhile, Gladys cautions Cassie against falling for Jerry and following in her footsteps, because she’s absolutely miserable that she can’t have Arthur, whose socially conscious wife refuses a divorce. One scene that expresses this disparity well occurs after Cassie meets Gladys’ beau Arthur for the first time. Within a minute of Gladys leaving them alone, Arthur propositions Cassie. That episode leaves a rotten enough flavor in her mouth that Cassie decides not to accept Arthur and Gladys’ posh dinner party invite, and instead, she heads back downtown to her lowly apartment and Dot. Upon walking in the door, Dot drolly offers Cassie a small array of almost-rotting food, to no avail, and mourns over the grub she has to throw out. Dot’s baloney and slightly curdled milk are a far cry from what Cassie would have savored with Gladys and co. 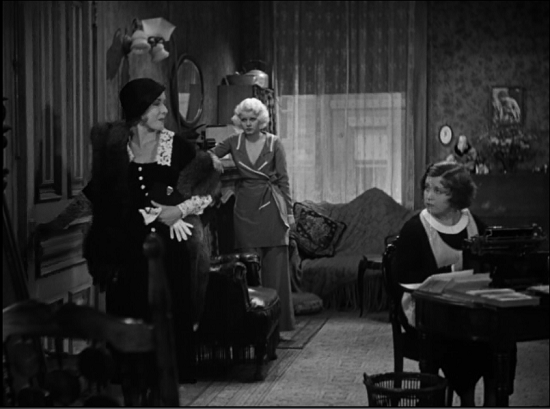 This screenshot captured a millisecond of Gladys (Mae Clarke) smiling. In case you haven’t already guessed it, hers is the tragic ending.

“Don’t get in my class.”
“Why shouldn’t she get in your class? What’s wrong with your class?”
In this third act scene, the only one all three ladies share, the class gets conflated with love. The age-old struggle between security and happiness comes roaring out as Dot and Gladys spew competing advice at Cassie, who is trying to figure out what to do about Jerry. While Dot pushes for security, Gladys urges Cassie to be strong and stresses an idea that could have either stung or uplifted viewers during the Great Depression: just because she has all the appearances of a privileged life doesn’t mean she’s happy or better off. The dialogue here bounces between Dot and Gladys and leaps between reality (barely scraping by, in Dot’s case) and perceived reality (Gladys having a swell time living in the lap of luxury). When Gladys insists she’d scrub floors if she had to do it all over again, Dot fires away, accusing her of forgetting how hard it is to dwell on the other side of the tracks. But Gladys affirms that she’s not riding high the way Dot observes on the outside because she’s at the mercy of her man:

He can walk out on you whenever he pleases, and what can you do? Do you know what you become when you live the way I do? A panhandler. You have to bow and scrape and beg for everything you get, and that goes for love as well as money. Their wives get everything – the home, security, respect – everything. And what do you get? Nothing. Nothing but grief. 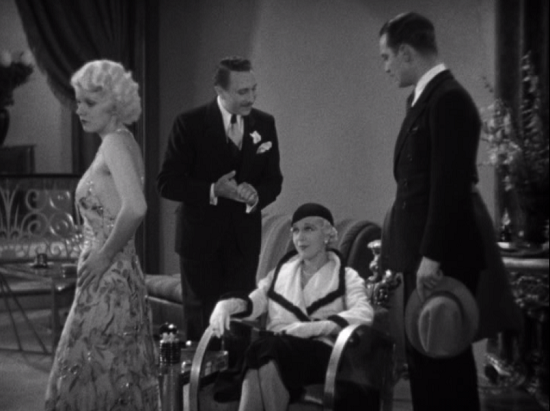 Modeling in front of your lover’s wife – the one you just found out about – is never a pleasant experience.

Comparing Gladys to a panhandler was undoubtedly choice wording that illuminated her situation, albeit a bit dramatically, in harshly relatable terms for a 1930s audience. In displaying through the film’s well-to-do characters, particularly Gladys and Jerry, that wealth doesn’t necessarily punch your ticket for a cheery existence, Columbia was imparting an apt message to the viewers. Life was hard for everyone during this decade in one way or another, even if it might not have appeared that way on the surface. In the end, Three Wise Girls affirms that you can find contentment on any wrung of the social ladder – even Dot scored with Jerry’s chauffeur – but it boils down to what you end up making of your situation. Sounds like a good lesson for all ages and eras to follow, doesn’t it?

2 Responses to Pre-Code Corner: Three Wise Girls All Mixed Up