Movie Musicals 101: Integrated vs. Back Stage Musical, a formal difference.

Just like the other “big kid” genres, the movie musical can be divided into separate sub-genres based on their structural differences. The two main sub-genres of the musical are the integrated musical and the backstage musical.

Responsibility of character and plot development will actually rely more often on the song and dance numbers than the actual plot itself. The Wizard of Oz, Swing Time, and Singin’ in the Rain are notable examples of this type of musical. 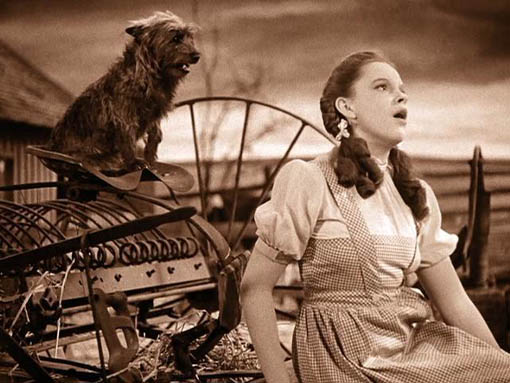 Judy Garland‘s rendition of Somewhere Over the Rainbow explains the inner turmoil of Dorothy in a perfectly placed and paced song in The Wizard of Oz. (1939, director Victor Fleming)

The backstage musical, on the other hand, puts no effort towards integrating musical numbers with plot. Any singing and dancing that may occur are completely divorced from the plot of the film’s narrative. Usually set in a theatrical context, said narrative tends to revolve around the production of a staged musical because, well, we are watching a musical. When the song and dance number of a backstage musical begins, story is forgotten for the sake of spectacle. The petty squabbling and cinematic lives of the characters on screen cease to exist when the song and dance number begins. In that moment, all that matters is the spectacle. The musicals of Busby Berkley and the 2009 film Once, are some notable examples of this musical subgenre.