Cliff Edwards was a popular Vaudeville, Broadway and singing star, better known as “Ukelele Ike” in his heyday during the 1920s and 1930s.  In 1929, while playing at the Orpheum Theater in LA, Edwards caught the eye of MGM producer/director Irving Thalberg, which sparked the beginning of his film career. Over the course of the next 40 years, Edwards would appear in over 100 shorts, films and television shows including Doughboys with Buster Keaton in 1930, His Girl Friday in 1940 as the character ‘Endicott,’ and in the 1941 Disney classic Dumbo as the voice of the ‘head crow’ — however, Cliff Edwards is most famously known as the voice of the beloved Jiminy Cricket in yet another timeless Walt Disney classic, 1940’s Pinocchio.

“When you wish upon a star, makes no difference who you are. Anything your heart desires will come to you” -Cliff Edwards as Jiminy Cricket 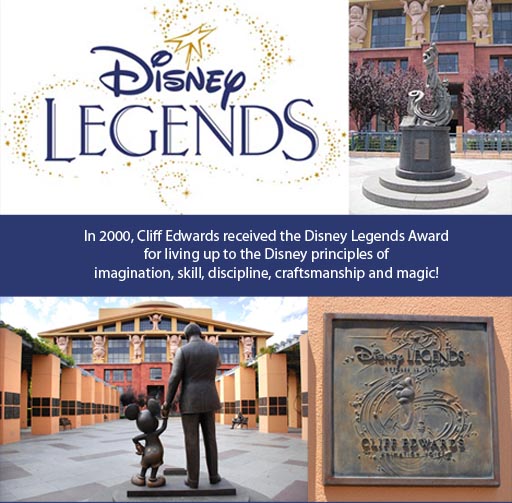 In 2000, Cliff Edwards received the Disney Legends Award for living up to the Disney principles of imagination, skill, discipline, craftsmanship and magic!