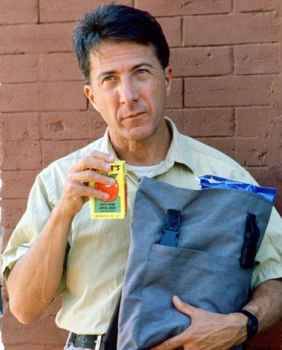 One of the greatest actors on the stage, in film, and on television, Dustin Hoffman wasn’t someone who had plans to be an actor. But thankfully, plans tend to change, and all of us have been rewarded over the past 50+ years with some of the most memorable characters that Dustin Hoffman has portrayed throughout his career. Born on April 8, 1937 to Lillian and Harry Hoffman, Dustin began his life in Los Angeles, California. Spending his teen life there, he graduated from Los Angeles High School in 1955 and had plans to study medicine at Santa Monica College. But after one year, Hoffman decided to drop medicine and went on to join the Pasadena Playhouse.

Hoffman didn’t exactly break into the business right away. After spending two years at the Pasadena Playhouse alongside fellow Oscar-winner Gene Hackman, the two traveled to New York City in an attempt to find acting jobs. This didn’t exactly go as planned and Hoffman, to support himself, found himself taking some odd jobs. A couple of these jobs were working at a restaurant coat checking and stringing Hawaiin leis. While only really getting support television roles, Hoffman had to take a break from acting and went on to teaching for a bit.

In 1966, he finally got his big break as director Mike Nichols chose Hoffman to star in his film, The Graduate. Hoffman would receive his first Academy Award nomination for his role and would go on to bigger projects from there. Hoffman headed to Broadway in December of 1968 to appear in the musical Jimmy Shine, which gave him a Drama Desk Award for Outstanding Performance. Within the next few weeks, Hoffman would be on the set of his next major film, the Academy-Award winning Midnight Cowboy.

Dustin Hoffman finally won his first Academy Award in 1979 for his role as Ted Kramer in Robert Benton’s Kramer vs. Kramer. The film would go on to win five Oscars including Hoffman’s win for Best Actor. The other awards included Best Picture, Best Directing, Best Screenplay, and Best Actress in a Supporting Role for the wonderful Meryl Streep. From here, Hoffman’s roles only got better and better, and he went on to win another Oscar for his role as autistic savant Raymond Babbitt in Rain Man.