Though she only made 11 films, Grace Kelly achieved international icon status as a film star thanks to her gorgeous looks, great fashion sense, work with recognized masters, and for winning the Oscar as Best Actress for The Country Girl in 1954. Even then, most people really only remember her for four titles: High Noon, Dial M For Murder, Rear Window, and To Catch a Thief. Mostly forgotten is the fact that Grace appeared in almost 40 television shows and movies, almost four times as much work as her film career, all stepping stones on her road to fame and fortune. 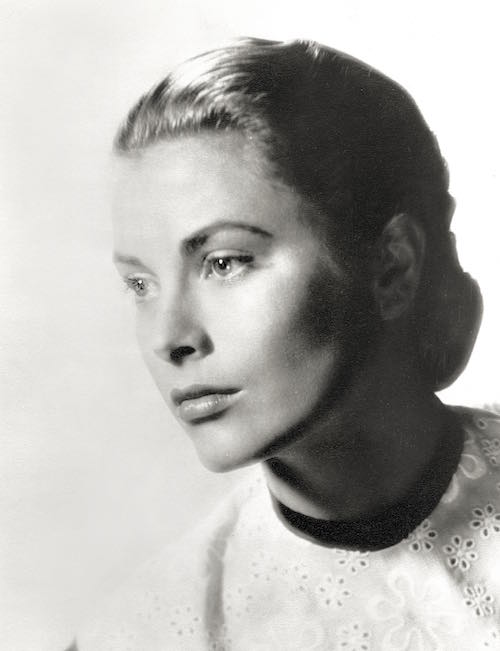 Before Grace worked in film or television, she hoped to become the theatre world’s next Sarah Bernhardt. When she entered the American Academy of Dramatic Art, Grace hoped to surpass her Uncle George Kelly’s success on the stage by conquering Broadway. She spent hours studying movement, character work, expression, and striving to improve her small voice and twangy accent by changing it into a “near British” accent.

Upon graduation, Grace began auditioning for theatre productions to gain experience and improve her skills, always looking for quality parts to help her grow as an actress. She sought out work in productions featuring veteran stage performers who could provide insight and information on the skills needed to succeed in their difficult profession.

Demonstrating her usual determination and drive, Grace traveled the country appearing in summer stock productions from Denver, Colorado to Michigan to New York over the next few years. She first stepped on stage professionally outside Philadelphia at the Bucks County Playhouse on July 25, 1949 appearing in her uncle’s play The Torch-Bearers with comedienne Mary Wickes. She would later also appear onstage at the Bucks County Playhouse with Hollywood performers John Loder and Jerome Cowan.

Oscar winner Raymond Massey hired her in the fall of 1949 to play his daughter in a Broadway production of August Strindberg’s The Father which he also directed. Mady Christians played her mother in the show, which opened November 16, 1949 at the Cort Theatre. Both the production and Kelly received excellent reviews. The New York Times wrote, “Grace Kelly gives a charming, pliable performance as the bewildered, broken-hearted daughter.” She won win the Daniel Blum Award in 1950 as one of the most promising young performers for her acting in the show.

Grace continued seeking out stage roles through 1952. In January 1951, she appeared in the play Alexander at Albany, New York as a nightclub singer carrying on an affair with the husband of the character played by former silent screen star Leatrice Joy, which drew fair reviews. Variety reported, “Grace Kelly, 20-year-old niece of playwright George Kelly, is attractive and intelligent, but doesn’t always suggest the sexy, after-dark canary.” In April 1952, Grace made her last Broadway appearance in support of veteran actor Neil Hamilton in the play To Be Continued, which ran for only six performances.

Perhaps seeing the writing on the wall with so few stage performances, Grace shifted her focus towards television while also continuing modeling work. Each job and role played stepping stones in moving her closer to success. As Grace told Ladies Home Journal in 1961, “….a career is a series of breaks. One thing leads to another, and each is a different kind of break.” Moving from stage into television assisted Grace in her rise to screen stardom.

Thanks to her talents for memorizing quickly, improvising, and being prepared, Grace began landing roles on tv in 1950. She starred as the title character in Sinclair Lewis’s Bethel Merriday on Philco TV Playhouse in January of that year, directed by an up and coming Delbert Mann. Playing a somewhat autobiographical role of a young ingenue struggling to learn acting in a stock company, Kelly received a great review from Variety, which stated that she “brought the title role to life in one of the neatest thesping jobs yet seen in the series.”

Case of the Diamond Necklace

That spring, Grace appeared in three episodes of Actor’s Studio Playhouse, including starring in The Swan, which appeared on television June 6, 1950. This marked her first opportunity at playing the same role as that in her penultimate film and one with similar autobiographical touches. Variety thought her work “masterful” in the role. In November, Grace starred opposite Leo Penn, Senn Penn’s father, in Episode for the Somerset Maugham TV Theatre.

Taking a break between TV shows, Grace played a small role in the Twentieth Century-Fox film 14 Hours that year, her first time on the big screen. Though not well remembered, the role helped get Grace noticed and solidified her television career.

Grace continually sought out roles that offered a challenge, especially those with the opportunity to learn from seasoned performers. In late February 1950, she starred in the first play of radio director Norman Corwin’s to be televised, Ann Rutledge. She played the title character, Abraham Lincoln’s first romantic partner. Grace would star opposite a young Leslie Nielsen in the Armstrong Circle Theatre 1951 presentation Lover’s Leap and appear with Darren McGavin in Recapture in 1952.

In fact, 1952 stands as the most prolific year for Grace during her time on television, even after starring in the blockbuster movie High Noon. She would appear with Brian Keith in 50 Beautiful Girls, Shepperd Strudwick in City Editor, Dick Foran and Nina Foch in the western The Kill directed by Franklin Schaffner, who later directed Patton and Planet of the Apes, and with Nils Asther, and Robert Montgomery in Candles to Therese on the Robert Montgomery Presents show.

Grace earned perhaps her greatest opportunity in television on January 13, 1952, when she played Dulcinea in the CBS Television Workshop production of Don Quixote opposite the horror master himself, Boris Karloff. Directed by neophyte Sidney Lumet, the show earned dismal reviews, thanks to major cutting reducing it to 30 minutes and for terrible effects that failed to come off on television. Variety wrote that “the production itself emerged as almost amateurish”…with “faulty camera and production technique.”

Continuing to improve her craft, Grace starred in TV productions through early 1954, just a few months after the release of the MGM film Mogambo in 1953. In what is probably her last TV performance, Grace starred in the Kraft Theatre presentation of The Thankful Heart, a story about modern medicine.

Thanks to the success of High Noon and Mogambo, Grace Kelly had become a household name. With the likes of director Alfred Hitchcock desperate for her services, Grace had no need to continue appearing on television. In 1954, she appeared in five motion pictures, including Dial M For Murder, Rear Window, and the film for which she won the Academy Award for Best Actress, The Country Girl.

Grace’s television work is mostly forgotten today because so much early television is lost or so difficult to see. Her more than 40 roles in TV deepened her acting skills and prepared her for the grueling work of appearing in front of the camera, helping shape the iconic star we all know and love.

Mary Mallory is a film historian, photograph archivist, and researcher, focusing on Los Angeles and early film history. She is the author of Living with Grace: Life Lessons from America’s Princess. She also co-authored Hollywood at Play: The Lives of the Stars Between Takes (with Stephen X. Sylvester and Donovan Brandt) and writes theatre reviews for The Tolucan Times and blogs for the LA Daily Mirror. Mallory served on Hollywood Heritage, Inc.’s Board of Directors, and acts as a docent for the Hollywood Heritage Museum. You can follow her on twitter at @mallory_mary.

You can click here to order Mary’s latest book on amazon: