So read the tagline for Twentieth Century Fox’s glossy, highly fictionalized biopic about the famous (and infamous) Dolly Sisters. In the film, Betty Grable and June Havoc portray the twin sweethearts of Broadway and cabaret stages. Over fifty years later, Emma Hamilton and Zoe Richards portrayed the twins on the PBS miniseries, Mr. Selfridge. In both portrayals, the twins are presented as blonde gold diggers. In reality, the Dollies resembled Louise Brooks in appearance and, though they had a taste for extravagance and wealthy men, were much more than the bubble-headed girl’s film and television make them out to be. 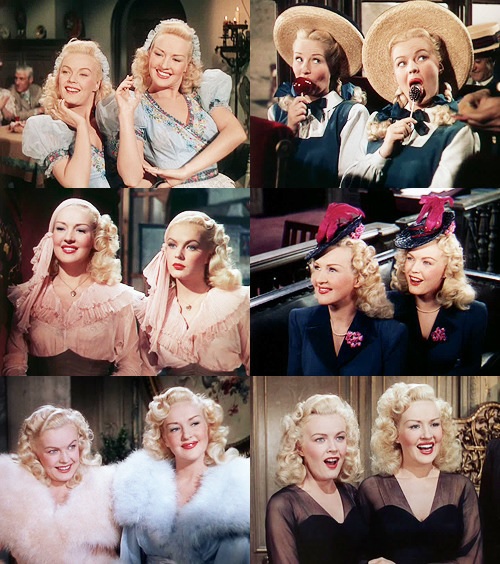 An array of images from “The Dolly Sisters” film starring Betty Grable and June Haver.

Rosie and Jenny Dolly were born in Budapest, Hungary on October 25, 1892, as Janszieka (Jenny) and Roszicka (Rosie). After their father’s business fell apart, the family moved to New York where the girls began to make money by dancing. They invented their own dances to perform on vaudeville; their mother helped sew their costumes. Eventually, producers took notice of their animation and high spirits if not their so-so singing and dancing skills. “They had that indefinable something made even more special by the fact that they were identical twins,” Dolly Sisters’ biographer Gary Chapman commented. They worked their way up to Broadway and the glorious stages of the great Ziegfeld and Shubert Brothers. Rosie and Jenny took the memorable name “Dolly” because legend has it, one critic proclaimed them to be “as cute as dolls”. 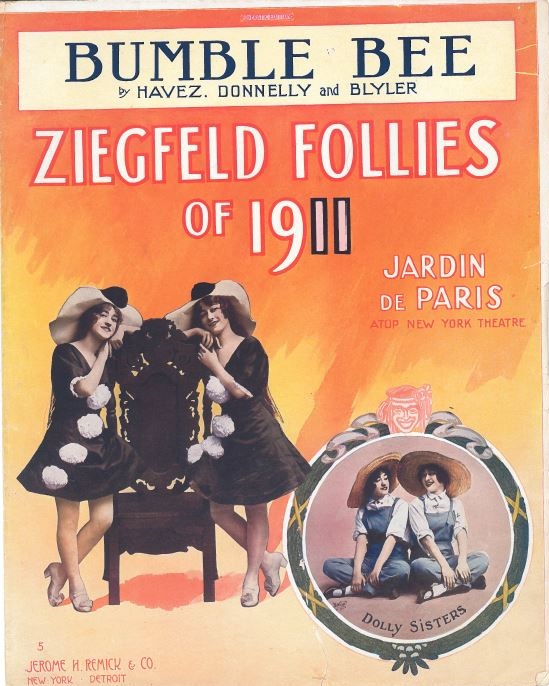 Sheet music for one of the Dolly Sisters’ most popular Ziegfeld Follies numbers, “Bumble Bee.”

Florenz Ziegfeld aided them in creating their trademark look in 1911 when he signed them for the Follies. For a routine in which they portrayed Siamese twins, Ziegfeld’s costumers adorned the girls in costumes that brought out the hint of the gypsy in their slanted eyes, black hair, and petite figures. Their jewels, head-dresses, and finger-cymbals all spoke of the Far East. The striking sisters became musts at Jazz Age parties and fashion designers loved using the twins to show off their latest creations. 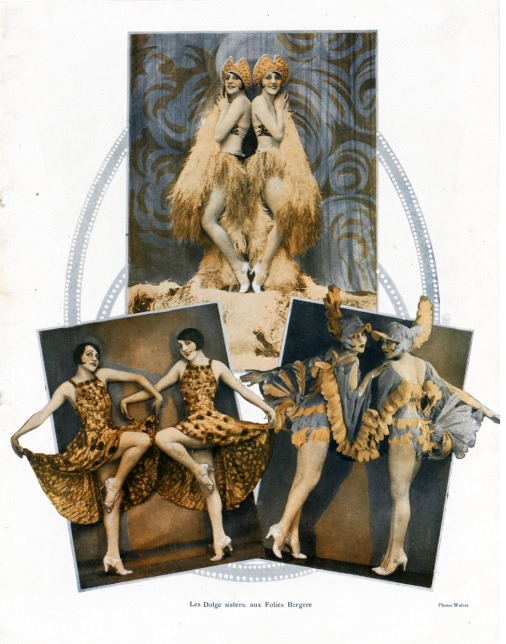 The Dolly Sisters in their Follies Bergere costumes.

Here are five fun facts to illuminate more about these misunderstood Ziegfeld Girls:
The Dolly Sisters had many admirers: the Prince of Wales (Edward VIII), King Alphonso of Spain, American mogul Harry Selfridge, and Diamond Jim Brady. There’s an erroneous belief that the Dollies ruined their suitors (most notably Harry Selfridge). Not true! Selfridge, according to the Dollies’ biographer Gary Chapman, brought on his own ruination “because of his obsession with twin dancers.” Though the girls may have appeared manipulative and teasing to their suitors, they were eternally romantic. They went into each new affair with excitement and hope that they would find the true love that eluded them. 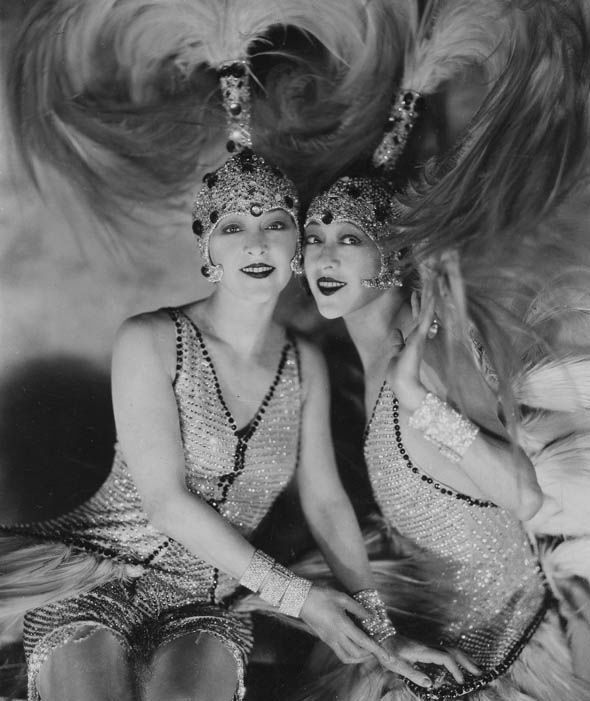 An iconic image of the Dollies in elaborate costumes.

Jenny and Rosie did have a rivalry, and, for a time, they seemed to marry and divorce in sync with one another. In 1913, Rosie married Jean Schwartz, author of “Rockabye Your Baby With a Dixie Melody.” In 1914, Jenny married creator of the Fox Trot, Harry Fox. Though marriage led to separate careers from 1915-1916, with the twins appearing independent of one another in films, they were so close that they could not stay apart for long (they were so close that they dressed alike both on and off the stage!). They became a permanent team again in 1916 and made a hit playing at the famed Palace Theatre. In 1920, Jenny divorced Fox. The following year, Rosie divorced Schwartz. The twins, like many in the Lost Generation, relocated to Paris and would stay there for most of their lives. 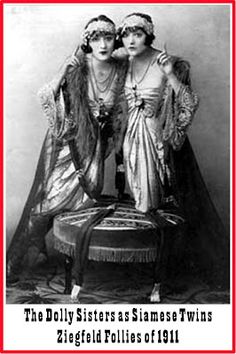 The Dollies in their Siamese Twin act for the Follies.

Rosie and Jenny, in Ziegfeld’s opinion, did not have much talent, but they were cute. His opinion may have held some truth. The Dollies were, according to Daily Mail author Martha de Lacey, “were perhaps the first celebrities to be famous simply for being famous.” The rags to riches twins basked in their wealth and the attention lavished upon them. But the Depression ended their not so proverbial days of wine and roses. In 1933, Jenny was in a near-fatal car accident that ruined her lovely face. Endless plastic surgeries did nothing to make her appear again like her sister. She expressed that she wished she had died rather than live on, as she put it, “a broken shell.’ In 1941, she hung herself from a curtain rod with the sash of her dressing gown. Rosie was in a seemingly happy marriage and seemed to have forgotten her sister and her failure to invite Jenny to a Memorial Day dinner appears to have been the last straw.

A heartbroken Rosie unsuccessfully attempted to follow her sister in 1962 by overdosing on pills. Rosie’s unhappiness is reflected in her statement, made upon her return to New York in the ‘60s: ‘I found out that America has changed— I’m in New York, old friends you call up when you arrive – they’ve forgotten you. They don’t call back.’ In 1970, Rosie died of heart failure. Both Rosie and Jenny had become addicted to attention and celebrity, and without much but their looks to fall back on, they found it incredibly difficult to accept the impermanence of their fame and beauty.

They played classic “twin tricks.” Once, a beau invited Rosie to lunch, but she wasn’t that attracted to him. So, she ate quite a bit of food and then excused herself. Jenny took her place and ordered more food. This made the unwanted beau lose interest. Rosie and Jenny loved being twins, making it all the more tragic that they grew apart in their later years.
The Dollies were not flashy. Their costumes actually covered up a lot of skin, while other cabaret performers virtually stripped during their performances. They also let admirers come to them; they did not pursue. Diamond Jim Brady pursued them most fervently. He gave them diamonds and a Rolls Royce, among other precious items. However, the relationship remained strictly platonic. The Dollies’ love, it seems, could not be bought.
The Dolly Sisters may not be well-remembered today, but they truly reflect the essence of the Roaring Twenties and the triumph and tragedy of the Lost Generation.

This entry was posted in Posts by Sara and Cynthia Brideson and tagged The Dolly Sisters. Bookmark the permalink.

6 Responses to Five Fun Facts About The Dolly Sisters