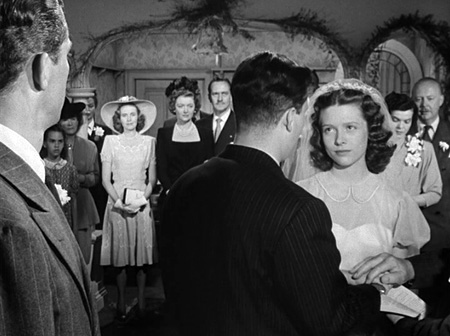 There’s so much that I could say about The Best Years of Our Lives…and that’s even before I did some background research on it. The Best Years of Our Lives focuses on the lives of three men returning home after serving in WWII — Fred Derry (Dana Andrews) , Al Stephenson (Fredric March) and Homer Parrish (Harold Russell).  The three men meet on the plane coming home from the war, share a cab ride, and become friends.  As each man tries his best to readjust to his old life, he must deal with new personal battles:  Fred Derry’s wife Marie (Virginia Mayo) wants to live a more lavish lifestyle that he simply cannot afford; Al Stephenson struggles with family life and job integrity, and starts showing signs of alcoholism; Homer Parrish, who lost both his hands in the war and now uses hook prostheses, is well aware that his appearance makes others uncomfortable.  One night, Homer goes out to avoid the awkwardness of being around his fiancée Wilma (Cathy O’Donnell) and their families after he is unable to properly hold a cup in his hooks.  That same night, Fred roams around the neighborhood, going from nightclub to nightclub in search of his wife, and Al decides to go out with his wife Milly (Myrna Loy) and daughter Peggy (Teresa Wright).  And, as luck would have it, all three end up meeting in the same bar. I won’t divulge the plot any further because I would be depriving you of some key moments that you really should witness for yourself. While I was watching the movie, I found it extraordinary that Harold Russell was so skilled with his hooks. The thought then entered my mind that it was entirely possible those hooks were real — so I looked into the life of Harold Russell, and he did lose both of his hands in the Army. Everything that I saw on-screen was completely authentic, and I was left speechless. Harold Russell wasn’t an actor — he was as real as any person could be. During the Academy Awards ceremony of 1947, Harold Russell was awarded an honorary Oscar for “bringing hope and courage to his fellow veterans.” This special award was created because the Board of Governors assumed that Russell had little-to-no chance of winning a competitive award, and they wanted to salute him in some way. Little did they know however that Russell would go on to win the Best Supporting Actor Oscar, and to this day, he is the only actor in history to win two Oscars for the same performance.

Fred Derry: You gotta hand it to the Navy; they sure trained that kid how to use those hooks.
Al Stephenson: They couldn’t train him to put his arms around his girl, or to stroke her hair.