The Funny Papers: When Scary is Funny

When Scary is Funny…

Autumn is such a beautiful and fun time of year. With it, come the crisp leaves and cooler temps but also all the Halloween fare, including the spooky comedy films. As a kid, these films were usually on the lighter side of horror, and they continue to charm me decades later.

People have always had a fascination with being frightened. But what’s really interesting is its close connection to comedy. We enjoy being scared, but only when deep down we know we are actually safe (from roller coaster rides to watching vampires on a screen). It’s the tension and buildup of fear, followed by the sudden relief that jolts us with exhilaration. Laughter is the perfect relief to cut through all that scary tension.

Early filmmakers like Alfred Hitchcock knew how addictive this tasty combination of fear and laughter could be. Going back to Universal Horrors, it is clear that the most successful classic horrors do well with splashes of humor (i.e. Una O’Connor in Bride of Frankenstein (1935)). And as many genres go, the evolution inevitably will progress into parody. As such, some of the best horror films and ‘bits’ evolved into comedy gold. 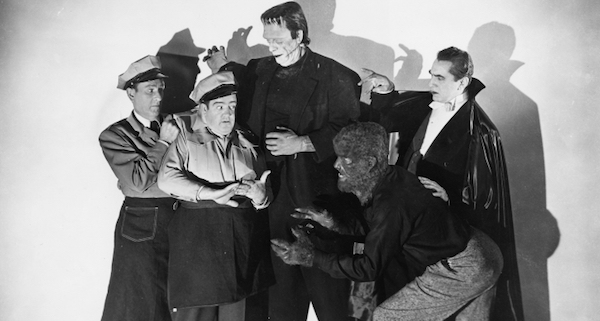 One classic comedy team who successfully built an entire career on mastering the art of making scary funny is the hilarious duo, Abbott and Costello. Lou Costello was always the lovable, child-like, physical-comedy clown we rooted for but was fated to find trouble at every turn. His hilarious over-reactions in stark contrast to Bud Abbott’s straight man is how we might respond if stuck in a jam, or facing down iconic Universal Horror legends. Based on a mix of Universal Horror monster figures and themes, and successful Abbott and Costello vaudeville bits, a string of horror comedy films emerged. They were immensely popular – and remain timeless classics.

Here are examples of their best:

HOLD THAT GHOST (1941)… look for Shemp as a soda jerk, the Andrew Sisters, and a haunted hotel. The famous ‘moving candle routine’ was the inspiration for this film. 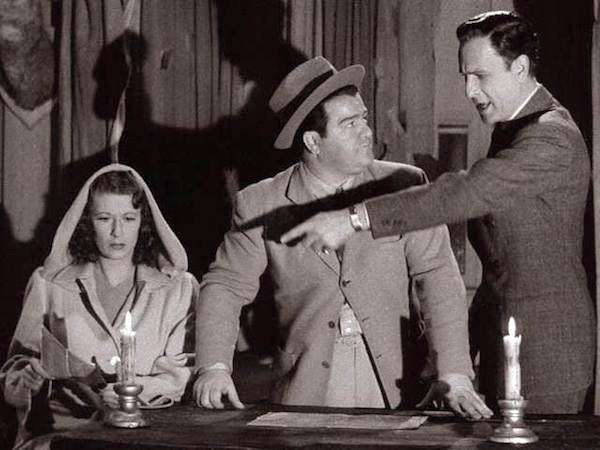 Joan Davis, Costello and Abbott in Hold That Ghost

ABBOTT AND COSTELLO MEET FRANKENSTEIN (1948)… brilliant ensemble of Bela Lugosi as Dracula, Glenn Strange as Frankenstein’s creature, Lon Chaney, Jr. as the Wolfman, with a voice cameo of Vincent Price as the Invisible Man. This is their funniest of the bunch, in my opinion. It’s brimming with constant bits and fast-paced slapstick scenes with memorable lines such as…

Wilbur (Costello), after being chased by Dracula (Bela Lugosi) and his assistant Sandra (Lenore Aubert), starts to ask his buddy Chick (Abbott) a question…

Chick: I’ll bite.
Wilbur: No, you gotta stand in line.

When yet another attractive woman pursues Wilbur, Chick is dumbfounded.

Chick: I don’t get it. Out of all the guys around here that classy dish has to pick out a guy like you.
Wilbur: What’s wrong with that?
Chick: Go look at yourself in the mirror.
Wilbur: Why should I hurt my own feelings? 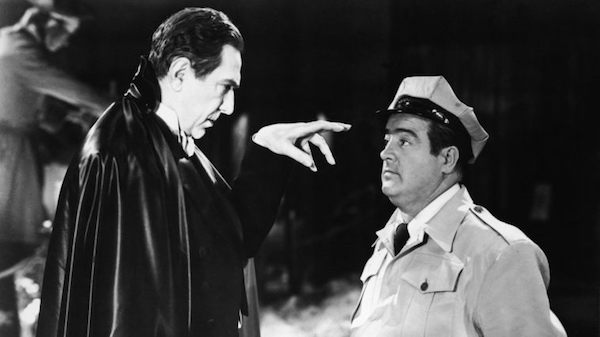 You know there’s no such a person as Dracula 🙂

ABBOTT AND COSTELLO MEET THE KILLER, Boris Karloff (1949)… originally scripted as a vehicle for Bob Hope, with a female playing Karloff’s role, this production was reworked to cater to the public’s demand for another Abbott and Costello spooky comedy. Karloff portrays a scheming Swami with deadly intentions and hypnotic skills.

Swami Talpur (Boris Karloff): Perhaps you should choose the manner of your death. How would you like to die?
Freddie Phillips (Costello): Old age.

ABBOTT AND COSTELLO MEET THE INVISIBLE MAN (1951)… not as much of the typical monster scares as we see in some of the others, but just as many funny gags galore. This time there are a few themes mixed in beyond scary and funny. Bud and Lou jump into the boxing ring with an invisible friend. As bumbling detectives who take on the mob (with a mistrusting blonde, a mobster familiar face of Sheldon Leonard and frequent copper William Frawley), this horror comedy genre nearly crosses over into the parody world of noir. 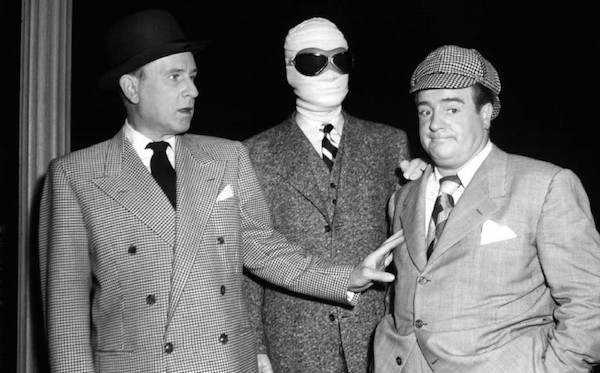 ABBOTT AND COSTELLO MEET DR. JEKYLL AND MR. HYDE (1953) …  this time Karloff returns and takes on a new role as the transforming doctor… 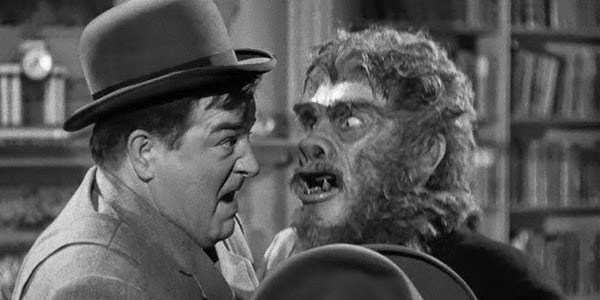 A friend of mine, Tom Meyers, Executive Director of the Fort Lee Film Commission in Lou Costello’s home state of New Jersey, is a friend of Costello’s surviving adult children (Chris and Paddy), and had this to add…

“Being born and raised in the same state that gave birth to Bud and Lou, I can safely say all of us in New Jersey truly believe scary is funny. Hell, everything is funny when you live in a state as small and crowded as our Garden State. Nowhere is that truer on film than in the classic, Abbott and Costello Meet Frankenstein. One of the greatest lines in cinema history, right up there with ‘Play it again Sam’ for me, is when Lon Chaney tells Lou Costello ‘Every night when the moon is full I turn into a wolf’ and Lou retorts with that singular Jersey-style accent, ‘You and twenty million other guys,’ – upon which Lon threatens to tear poor Lou limb from limb and Lou asks Bud ‘Is that serious? and Bud offers these comforting words, ‘He’ll murder ya!’  Need I say more?” 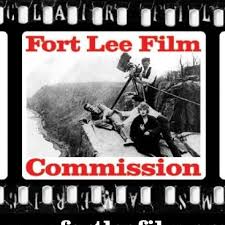 Some of the other classic comedians who mastered this art of creating hilarity when scared are: Don Knotts, Jerry Lewis (especially when paired with Dean Martin), Danny Kaye, Red Skelton, Bob Hope (often when paired with Bing Crosby), and Laurel and Hardy.  While Stanley Laurel was always the more quietly expressive side of the duo, even Hardy could not help but be spooked himself in the presence of a ghostly figure. Take a look at this clip from The Live Ghost (1934):

Martin and Lewis (with Lizabeth Scott) come across a haunted island with cameos of Hope and Crosby in a hilarious ending in Scarred Stiff  (1953):

This style of a duo facing the same situation with 2 very different perspectives is a popular setup – with one on the receiving end of a frightening environment (the slapstick), and the other (the straight) blithely unaware, and assuming extreme reactions are all in their pal’s head. Meanwhile, the audience is the informed voyeur as the entire spooky scene plays out, laughing at a safe distance. But it wasn’t always duos that took on this genre. Sometimes a soloist excelled. Dominating the nervous and jittery comics of the 1960s, Don Knotts was “the world’s most brave coward” in The Ghost and Mr. Chicken (1966):

Bob Hope took on a haunted Cuban castle, replacing his frequent sidekick of Bing Crosby with lovely Paulette Goddard, in The Ghost Breakers (1940). Here’s the trailer:

Occasionally, frighteningly funny classics were a group effort. OUR GANG had more than a few howlers. Alfalfa, Porky, and Buckwheat go sleuthing as amateur detectives in an amusement park haunted house on Long Island in Little Rascal’s Hide and Shriek (1938). Take a peek:

Other popular comedians of this genre were African American actors whose careers were built upon racist stereotypes, especially prevalent in the 1930s – 1950s. Willie Best (Bob Hope’s costar in The Ghost Breakers) and Mantan Moreland are just two examples of the many talented actors who were typecast within this form of racism.

Plenty of ghost theme films were made during the studio era. Often these spirits were relatively harmless, perhaps quirky, but simply ‘stuck’ so it’s up to the living to help them ‘move on’. But I cannot think of any modern day comics who exhibit this specific style of horror comedy built on the foundation of expressing ‘funny fear’ with equal zeal as the classics. When I revisit ones like the above examples, they continue to delight me with spooky fun, every single time to this day. I’m sure I missed more than a few – who are your favorites?

When not performing marketing and social media as her day gig, Kellee Pratt writes for her own classic film blog, Outspoken & Freckled (kelleepratt.com). Kellee teaches classic film courses in her college town in Kansas (Screwball Comedy this Fall). Unapologetic social butterfly, she’s an active tweetaholic/original alum for #TCMParty, member of the CMBA, Social Producer for TCM (2015, 2016), and busy mom of four kids and 3 fur babies. You can follow Kellee on twitter at @IrishJayHawk66.

8 Responses to The Funny Papers: When Scary is Funny