“You don’t understand. Every night when the moon is full,
I turn into a wolf.” -Larry Talbot
“You and twenty million other guys.” -Wilbur Grey

Bud Abbott and Lou Costello Meet Frankenstein (1948) — the perfect mix of horror, pathos, intrigue and downright silliness — a chance for a ‘scaredy cat’ like me to see the ‘Big Three’ classic movie monsters play straight men to the antics of beloved comedy team Abbott and Costello. The film marked the return of Bela Lugosi as Count Dracula a mere 17 years after the 1931 film made him a star; Glenn Strange appeared for the 3rd time in his career as The Frankenstein Monster, and our Blogathon Star, Lon Chaney Jr., reprised his role for the 5th time as the long-suffering Larry Talbot and his murderous alter ego, The Wolf Man.  And, if that’s not enough, there is a surprise ‘appearance’ by The Invisible Man (yes, I get the irony), voiced by Vincent Price at the very end of the film. 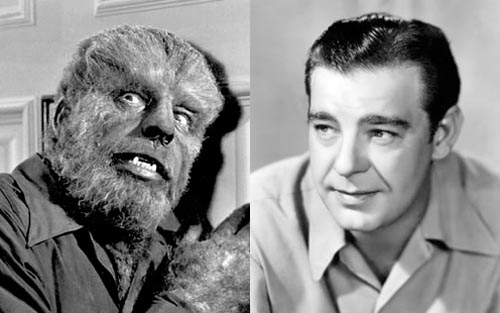 Lon Chaney Jr. as The Wolf Man and as himself

Now, I know that some would argue that the horror genre hit rock bottom with the release of this film, but for me, it’s an affectionate and respectful tribute to the monsters that scared the you-know-what out of us when we were kids.  And I just have to laugh out loud when I see poor Wilbur (Costello) and annoyed Chick (Abbott) repeat the ‘tried and true’ Abbott and Costello comedy routines that I’ve come to know and love over the years.  Perhaps it’s a simple case of nostalgia, perhaps it’s the hankering for some good clean fun, or perhaps it’s just a welcomed way to chuckle and unwind after a long and crazy day at work — but, whatever ‘it’ is, this movie never fails to put me in a good mood.

So, in the spirit of the comedy-horror genre, I’d like to celebrate Lon Chaney Jr. with some fun quotes and silly behind-the-scenes photos… 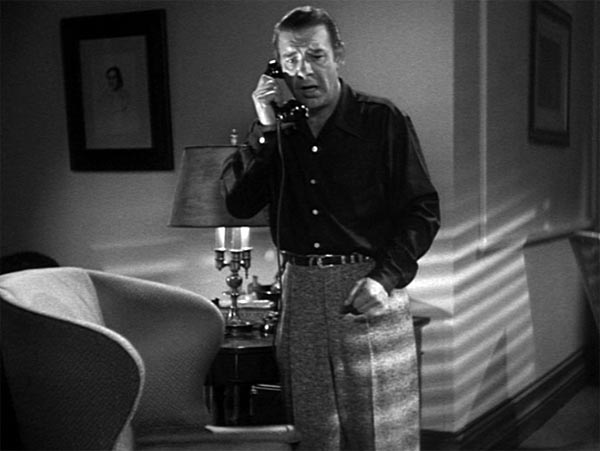 Lon Chaney Jr. — as poor, tortured Larry Talbot, calling from London to Florida to warn unsuspecting baggage-clerks, Wilbur and Chick, that something foul’s afoot… but alas, he ‘transforms’ and well…

“Do you have two crates addressed to the McDougal House of Horrors?… Tonight the moon will be full here. I haven’t much time. Now listen closely, I’m flying out of here at dawn. Under no circumstances are you to deliver those crates until I arrive. Understand. Under… growl, growl. growl, growl”
-Larry Talbot

Larry Talbot finds Wilbur (Costello) and Chick (Abbott) and explains that he’s the one who telephoned them from London warning them about those crates… and he adds that the bodies in those crates were alive…  (of course poor Wilbur already found that out for himself, and skeptical Chick thinks they’re both crazy 🙂 )

Larry Talbot: I followed Dracula all the way from Europe because… I believe that he’s going to try and revive the Frankenstein Monster. We must find him and destroy him before he can do this.
Chick Young: Wait a minute. Why don’t you go down to the police.  Tell them you know the story about Dracula and Monster — they’d be very interested.
Larry Talbot: Oh I can’t do that — ’cause then I’d have to tell them who I am and why I know what I know. 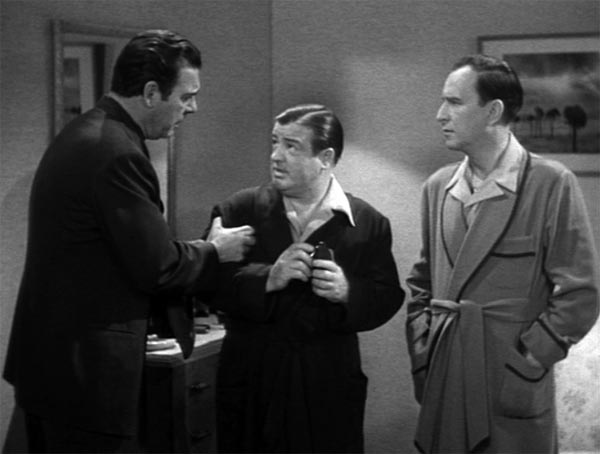 And so the plot thickens, as a desperate Talbot begs Wilbur to take away his hotel key and lock him away in his room — and warns him one last time…

“Remember no matter what you hear or what happens don’t let me out!”
-Larry Talbot

And so it goes… 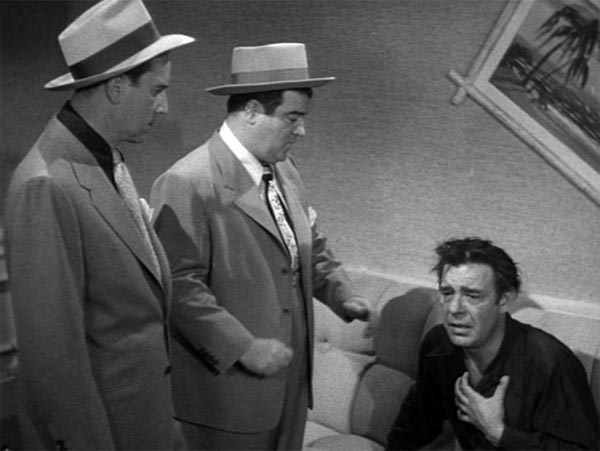 A bender? I think not…

Chick Young: Boy, what a bender he must have been on last night!
Wilbur Grey: Hey, Mr. Talbot, Mr. Talbot…and I thought you were such a nice man too. Look at yourself, you’re a mess!
Larry Talbot: Last night I went through another of my horrible experiences. Years ago I was bitten by a werewolf. Ever since when the full moon rises I turn into a wolf myself.
Wilbur Grey: Oh pal. That’s all right; I’m sort of a wolf myself. 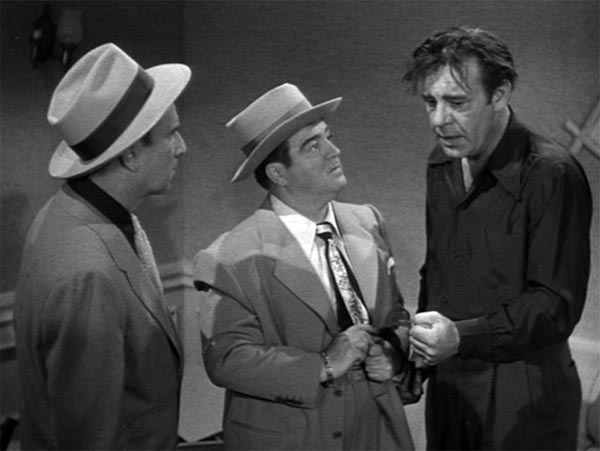 Suffice it to say that from this point on, crazy antics ensue as Wilbur and Chick find themselves at the mercy of designing women, evil doctors, mad monsters and a diabolical plot to steal Wilbur’s brain. Guess who the brain is for??? LOL!

Larry Talbot: You have seen the living dead. I came all the way from Europe because Dracula and the Monster must be destroyed.  Together we must find them!
Chick Young: Oh no, now wait a minute, let’s not start that all over again!
Wilbur Grey: I can’t go. I got a date. In fact I’ve got two dates.
Larry Talbot: But you and I — ‘have a date with destiny’.
Wilbur Grey: Let Chick go with Destiny. Won’t ya please, huh…

Director Charles Barton getting all shook up by The Wolf Man

“There were times when I thought Bela was going to have a stroke on the set. You have to understand that working with two zanies like Abbott and Costello was not the normal Hollywood set. They never went by the script and at least once a day there would be a pie fight.” -Director Charles Barton

Note: Abbott and Costello respected the three monsters and made sure no pies were flung at the heavily made-up actors.

Lon Chaney Jr. and Lou Costello relaxing on the set
(hopefully that’s not an exploding cigar!)

Flirting with the girls: The Wolf Man and Frankenstein having some fun
behind-the-scenes

Glenn Strange as Frankenstein with Ann Blyth from Mr. Peabody and the Mermaid (which was filming nearby) on the Universal Studio lot. Both Strange and Chaney Jr. were invited to the Mr. Peabody wrap party, where they hammed it up in their monster make-up. 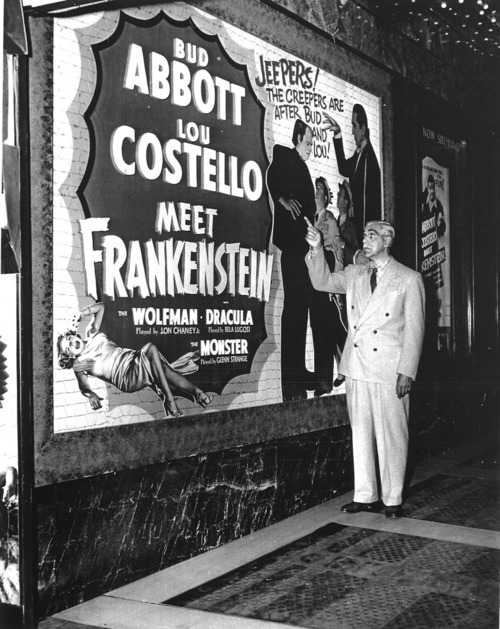 Universal’s original Frankenstein Monster, Boris Karloff, was asked to reprise his role for the film, but he declined. However, as a favor to Universal, he helped promote the film and can be seen in several publicity photos, including this one in which he points to the movie poster.

A big Thank You to the fabulous Jo (@TheLastDriveIn) of TheLastDriveIn.com, and the equally fabulous Fritzi (@MoviesSilently) of MoviesSilently.com for hosting this wonderful Chaney Blogathon event! There are so many more wonderful Classic Bloggers participating in this event so please be sure to check out the other entries.