When Poitier entered Hollywood in the late 40’s/early 50’s, leading roles for black actors were slim, and respectful roles for any black actor were even slimmer. Despite the notion that Hollywood has always been a place for liberals, rarely does it actually break from the national status quo. But somehow, Poitier was able to navigate through racist whims of Hollywood and gain respectful, challenging roles. Sure, playing an inner-city school kid in Blackboard Jungle may seem like a stereotypical role for any black actor, but he didn’t play up to those stereotypes in his acting choices. He played the role with dignity and respect and in doing so showed white America the dimensions a black actor could bring to black roles. Because of this, Poitier gained the responsibility of “black ambassador” to Hollywood, the sole carrier (in mainstream cinema, anyway) of the weight of black representation on the Hollywood screen.

Because of this representation, Poitier was subject to a different type of criticism than faced by the black actors of yesteryear. While Hattie McDaniel and Butterfly McQueen were criticized for their negative, or in the very least, stereotypical, portrayal of black characters, Poitier was criticized for sometimes playing unrealistically good characters. The basic notion being, that by playing characters that are too perfect and acting “whiter than the white” characters, he was ultimately doing a disservice to the African American community by offering yet another unrealistic representation. Although I can understand this criticism, accepted revolutionary representation in mainstream Hollywood is rare. In fact, I don’t think it’s ever happened. And Poitier knew this. That’s what makes him so great. He knew that in order to achieve a greater good, he must sacrifice his own representation to act as an ambassador to white, mainstream audiences. He had to be “more than perfect,” so that, eventually, a true representation of his community would be accepted on screen in the coming years.  And although Hollywood is still far from perfect in terms of how it represents people of color, it would not have come as far as it has without the courage and intelligence of Sidney Poitier. 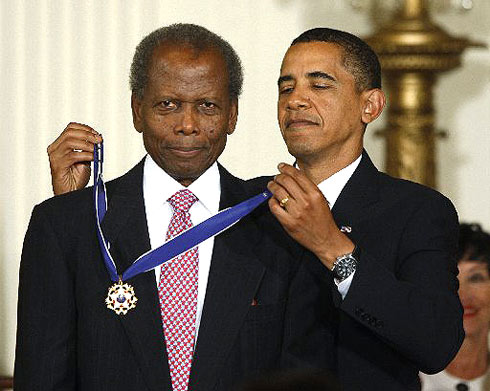 Sidney Poitier and another African American ground breaker. You may have heard of him. His name is President Barack Obama.