When film fans think of John Wayne Westerns, his classic films with John Ford and Howard Hawks are often the first which come to mind.

Similarly, when one thinks of Wayne’s leading ladies, the first actress many fans think of is doubtless his five-time costar Maureen O’Hara. The feisty women O’Hara portrayed were a perfect match for Wayne’s strong characters, giving as good as she got in films such as Rio Grande (1950), The Quiet Man (1952), and McLintock! (1962).

Looking beyond Wayne’s best-known films and leading lady, here are my three favorite Wayne Westerns made with directors other than Ford or Hawks. These films are particularly special because in each case there’s an outstanding role for the lead actress. Each of these female characters is unique, but they have in common the possession of an inner strength which makes them the right match for the Duke. 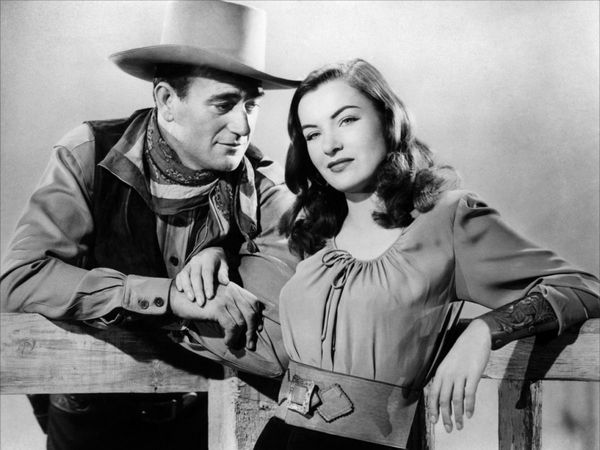 Tall in the Saddle is a relatively unknown little gem of a Western. It takes a fairly ordinary story regarding a land dispute and pumps it up with a strong cast and a fast-paced script with some excellent, often funny dialogue, co-written by costar Paul Fix. (An example of a favorite exchange: A shocked woman gasps to Wayne “I saw you hit that man!” and he laconically replies, “Yes, ma’am, just as hard as I could!”) Wayne plays Rocklin, who arrives in a dusty Western town to take a job on a ranch but discovers his employer has recently died. He’s offered a new job by Arly Harolday (Raines) — simply because she’s mad at him and wants the pleasure of firing him later on! Or so she says. A complicated mystery ensues, with multiple people conspiring to cover up the rightful owner of some land…and frame Rocklin for murder. 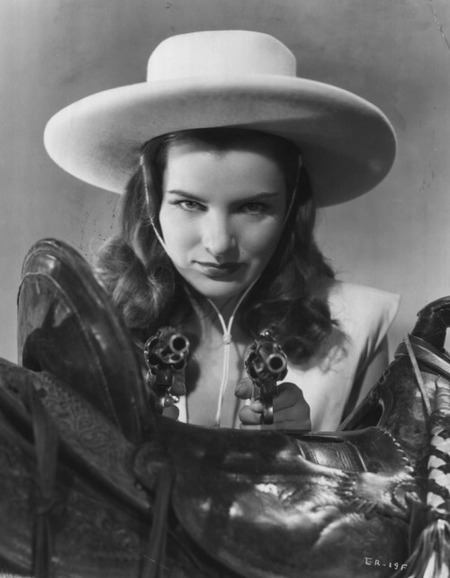 Ella Raines as Arly Harolday in Tall in the Saddle (1944).

Raines’ character doesn’t show up until nearly a third of the way into the movie, but her entrance is memorable; she erroneously believes Rocklin robbed her brother (Russell Wade) in a card game and proceeds to shoot in Rocklin’s general direction several times. (That’s followed by another funny moment as Wayne’s baffled character then heads for the saloon bar to recover and gasps “Whiskey!”) After hiring Rocklin, Arly gradually becomes more sympathetic to him but still can’t quite decide if she wants to shoot him or kiss him, but she increasingly leans in the latter direction. At one point Arly comments that she always gets what she wants, and there’s no doubt she wants Rocklin and is going to have him, even though she may have competition from the sweet, more ladylike Clara (Audrey Long). The fiery Raines and laid-back Wayne have tremendous chemistry, and it’s rather a shame they didn’t make more films together.

John Wayne & Gail Russell lay in the grass in Angel and the Badman (1947).

Angel and the Badman is not simply a favorite Wayne film, it’s one of my all-time favorite movies, period. Wayne plays Quirt Evans, a gunslinger who is wounded and rescued by the Worths, a Quaker family. As Quirt gradually regains his strength while staying on the Worths’ farm, he and lovely Penny (Russell) fall in love. Will Quirt decide to put his violent past behind him…and will he be able to? Marshal Wistful McLintock (Harry Carey Sr.) may hold some of the answers. 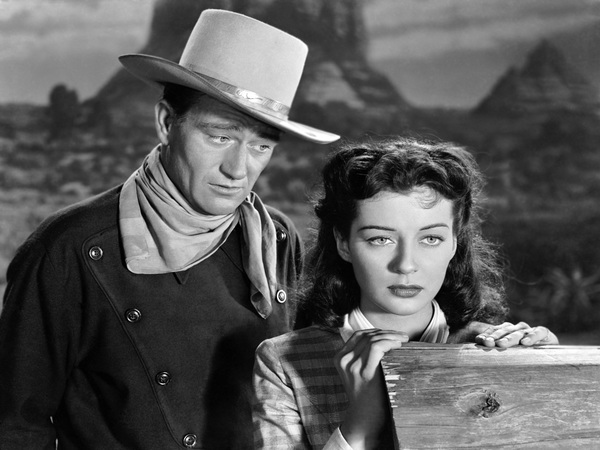 “Look, Penny… I am not that kind of guy who does things suddenly. I gotta look before I leap. You can ask anybody, they will tell you.”

Wayne gives a splendid performance, much of it nonverbal, as he comes to terms with his feelings for Penny. Russell’s Penny may look delicate and fragile on the outside, but there’s no stopping this young woman when she makes up her mind, and she falls for Quirt from the moment she lays eyes on him. She doesn’t hesitate to be honest and direct with Quirt about her feelings, and in an amusing scene, she shows that despite her angelic demeanor, she’s also capable of a little jealousy. She helps Quirt envision a life without violence, although they both learn there are times when a gun will still be necessary; and when her man is in danger, she insists on going to his side, despite having recently been deathly ill. In short, she’s the kind of determined woman with whom a man like Quirt can and should build a future. 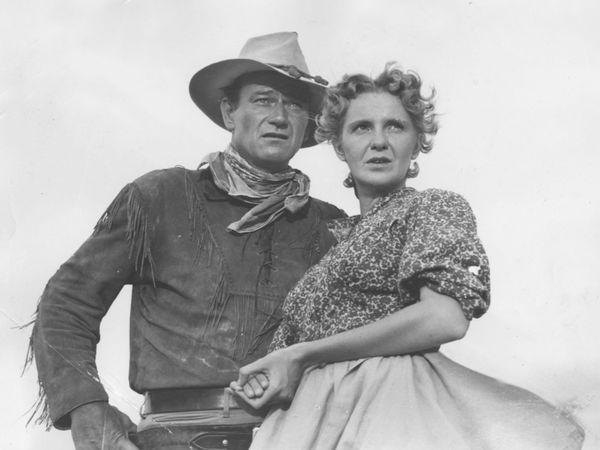 Hondo, based on a wonderful novel by Louis L’Amour, was written for the screen by James Edward Grant, who also wrote and directed Angel and the Badman. Wayne plays a character not too dissimilar from his gunslinger in Angel and the Badman, though Hondo Lane, an Army dispatch rider, is older and has a past which includes a few settled years living with an Indian wife.

After losing his horse while on a dispatch mission, Hondo stumbles across an isolated desert ranch inhabited only by Angie Lowe (Geraldine Page) and her little boy Johnny (Lee Aaker). Hondo tries to convince them to leave with him, as there’s unrest among the Indians, but Angie refuses to abandon her lifelong home, insisting that her husband will return soon and that the family has always gotten along with Indians. But when Hondo arrives at the army outpost he discovers that Angie’s husband (Leo Gordon) is a no-good son of a gun; back at the ranch, while Indian chief Vittorio (Michael Pate) takes a liking to Johnny and prevents harm from coming to the Lowes, he insists that Angie must take an Indian husband if her husband doesn’t return soon. Fortunately, Hondo is reunited with Angie and Johnny, with Hondo and Angie having a second chance to consider their futures. 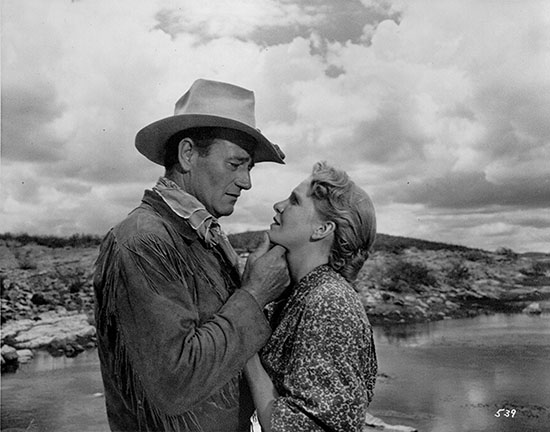 “When the Indians wind up their squaw-seeking ceremony, they only say one word. ‘Varlebena’ – It means forever.”

Page’s Angie may be the most courageous of the three women in these films, bringing up her son alone in an environment where there is a constant risk from nature, disease, or Indians. While it’s clear by the end of the film that she’s inwardly faced the reality of her bad marriage head-on, she keeps the truth from Johnny, believing he will grow up stronger if his ideas aren’t crushed, and indeed, she’s doing a wonderful job with him. Still, while she’s accomplished a great deal, there are some things a woman alone can’t do, like throw her six-year-old in the creek to teach him to swim, and Hondo soon fits in very well as both a father figure and potential husband.

I like that Page isn’t conventionally pretty, which Angie and Hondo acknowledge in a conversation, but Hondo can see past that and falls for her spunky character. Like Penny in Angel and the Badman, Angie has the courage to be direct in confessing her feelings for Hondo; having been through one disappointing marriage, she isn’t about to miss out on a good man when she sees one. And just as Angie had the courage to live in the middle of nowhere, she’s also got the gumption to abandon her home for a new start in California; I couldn’t help wondering what, if anything, she had time to grab from her old life before they hightailed it off of the ranch with the army! Angie Lowe is a fascinating character, and Wayne and Page make a slightly unusual yet wonderful couple in an outstanding Western.

Laura can be found at her blog, Laura’s Miscellaneous Musings, where she’s been writing about movies since 2005, and on Twitter at @LaurasMiscMovie. A lifelong film fan, Laura loves the classics including Disney, Film Noir, Musicals, and Westerns.  She regularly covers Southern California classic film festivals.  Laura will scribe on all things western at the ‘Western RoundUp’ for CMH.