Posted on September 18, 2018 by Hutchinson, Founder of The Vitaphone Project

When The Vitaphone Project began in 1991, the goal was to seek out early talkie soundtrack discs that were in private hands and otherwise unknown to exist. Once located, each disc was checked against potentially surviving mute picture elements (usually at The Library of Congress) and if a match was found, then a restoration was possible. In the beginning, collectors were alerted to the Project via Joslin’s Jazz Journal and other record collector publications. This was pre-internet.

In order to calm collector concerns about a studio or the FBI confiscating their discs, The Project worked with then-Turner Entertainment film vault manager Dick May. Dick wrote a letter that we could share with collectors. In essence, it said that should a disc be needed for a restoration, it would be temporarily borrowed and transferred, then returned. In addition, the collector would get on-screen thank-you credit as well as a copy (then VHS) of the completed restoration. While this sounds like an obvious position for Turner/Warner Bros to take, at the time it was the first of its kind. Other studios avoided collectors regardless of the help that they might provide. Most have since ‘seen the light’. But at the time, Dick’s letter was revolutionary and opened up the doors to many previously unknown collections.

In 1991, we had no clue that so many soundtrack discs would be found in private hands. At first, the holdings trickled in via snail mail, phone calls, and at record collector conventions. Most collectors had acquired their soundtrack discs accidentally or as part of buying similarly sized radio transcription discs.

Once the Internet began to explode, the rate of disc-overies escalated rapidly. Our Project website, www.vitaphoneproject.com came up as a top “hit” if anyone Googled “Vitaphone”. Visibility further improved in 2013 when we added our Facebook page.

Fast forward to 2018: We have now located over 6,200 soundtrack discs in private hands worldwide. These are in addition to those held by archives like UCLA, The Library of Congress, and the British Film Institute.

As discs are found, the list of shorts and features, which survive with the picture, only are crosschecked to determine if the disc is needed for a restoration. Currently, there are approximately 335 1926-30 Vitaphone short subjects for which The Library of Congress holds mute 35mm picture elements but no sound portion is known.

WHERE DISCS ARE FOUND

Record collectors aren’t the only source of soundtrack discs. They’ve been found in unusual places, often by people who do not have a clue what they are. By tracking us down on the Internet, we can then help determine what they have (often not a soundtrack), and if it’s an important disc that can make a restoration happen.

About 50% of the finds come from collectors as would be expected. But the remainder of sources truly runs the gamut. Most unusual was how the soundtrack disc for the since restored and wonderfully bizarre Vitaphone short, Trixie Friganza in My Bag o’ Trix  (’29) was located. A friend and 3D restoration guru Bob Furmanek was working for Jerry Lewis in the mid-1990’s, archiving his massive collection of films, paper, and recordings. He came across a tall stack of 16-inch recordings and, knowing the Project, and I immediately checked for Vitaphone discs. The stack landed in Lewis’s collection because, in the 1950’s, Paramount would record audience reactions to Martin & Lewis features at previews. These would then be used to more tightly edit the film before the official release. These recordings were done in the theatre —- on 16-inch discs. Within the stack, Bob found both the Friganza disc as well as a second, Jack Haley and Flo McFadden in Haleyisms (’28), for which no picture element is currently known. Lewis generously donated both of the Vitaphone discs to UCLA and a restoration, now on DVD was done in the late 1990’s. 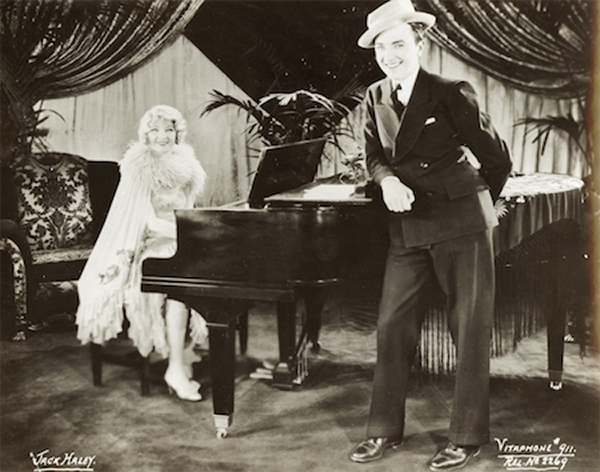 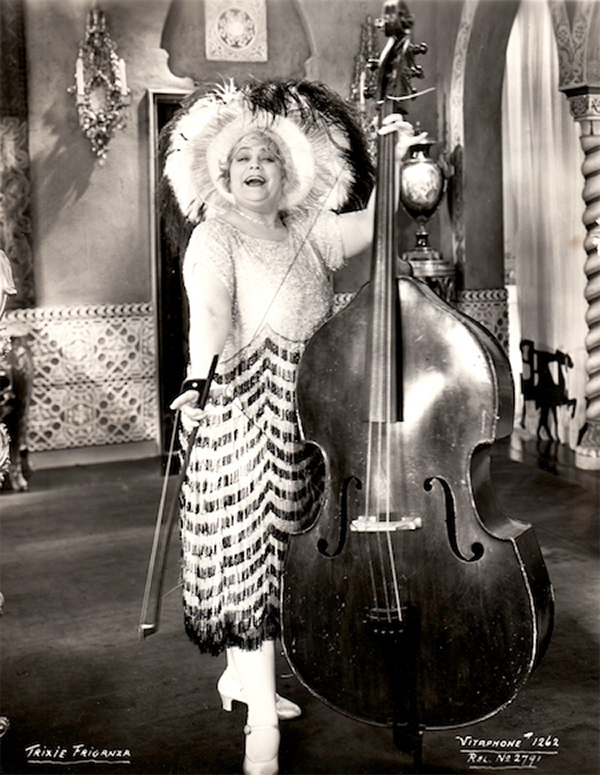 Other non-traditional places soundtrack discs have been found include, in 2015, a person in the Chicago area who bought an old home and found one disc in the attic. Again, the Internet facilitated their finding the Project. The disc was for an otherwise lost but super MGM hot band short, Irving Aaronson and His Commanders (’29). As for others unfamiliar with records, we arranged to get them a special shipping box and paid return costs to ensure safe arrival to the Project. An excerpt from this disc can be heard here: 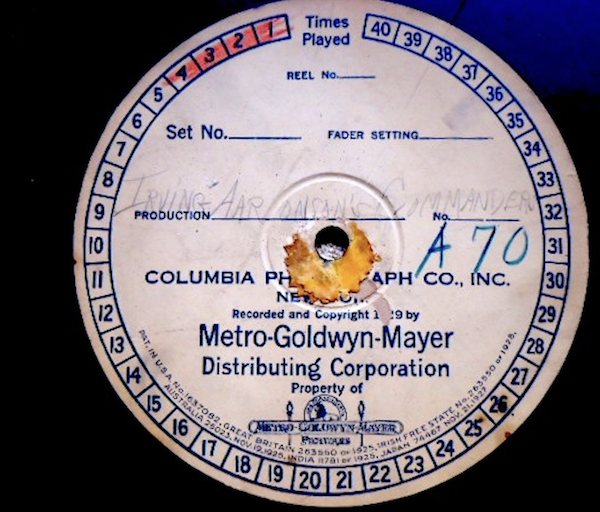 The largest single find of soundtrack discs came in 2011 when we heard from the executor of an estate in New Haven, CT. The recently deceased grandfather had run three movie theatres in the New Haven area in the twenties and thirties, and for unknown reasons would occasionally take home soundtrack discs. The size of the collection warranted a trip there to go through what the executor said were over 75 discs. 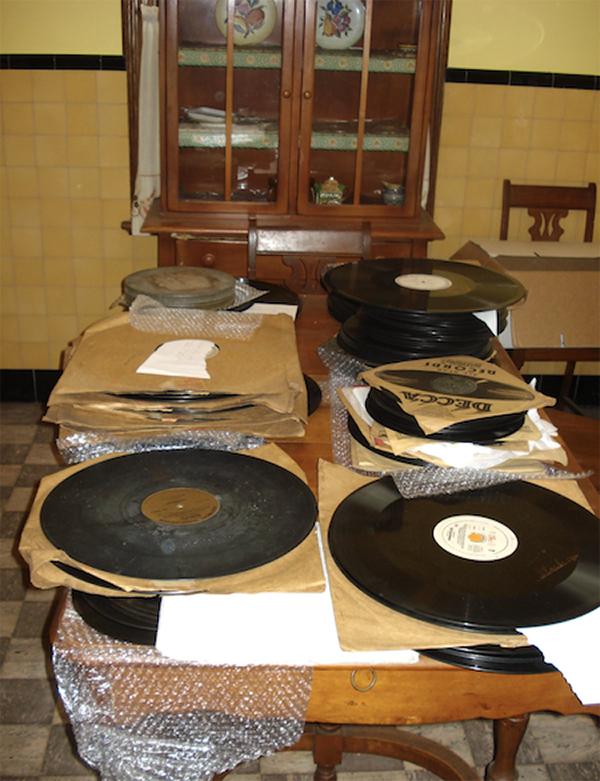 The table in New Haven, CT in 2011 loaded with over 75 soundtrack discs. These were all subsequently acquired by The Vitaphone Project and have facilitated the restoration of nearly two dozen shorts and features restorations.

I was not disappointed. Covering the entire dining room table in the old frame home were nearly a dozen stacks of discs. I contained my excitement and slowly went through each disc, notating title, studio sand reel on a checklist we’ve developed. When the smoke cleared, discs for 23 Vitaphone shorts for which picture survived were identified. Also in the cache were discs for many late twenties features from other studios including Redskin (Par/’29), The Mysterious Island (MGM/’29), D.W. Griffith’s Lady of the Pavements (UA/’28), The Bridge of San Luis Rey (MGM/’29), The Viking (’28) and many others. For Redskin and Pavements which had until then been missing most of its soundtrack discs, all were now available for a new restoration.

After getting approval from other family members, arrangements were made for the acquisition of the entire group of discs. Subsequently, over a dozen of the Vitaphone shorts were restored by Warner Bros and most are now on Warner Archive’s Vitaphone Varieties Volume 3 DVD set.

In a typical year, the Project learns of over 100 more soundtrack discs in private hands and adds it to its Excel database. This is viewable on www.vitaphoneproject.com . 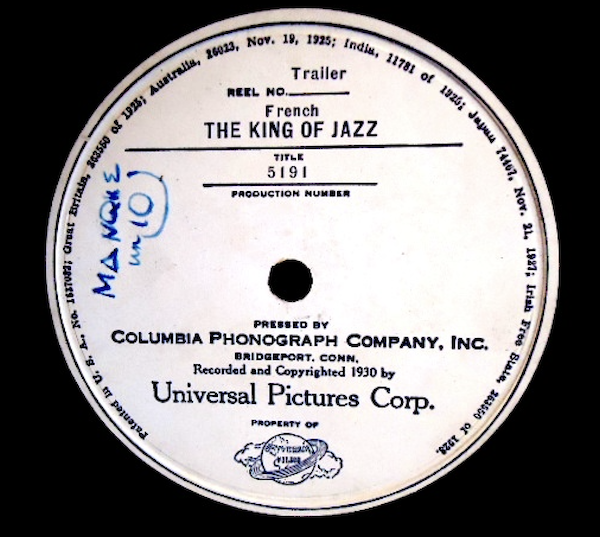 The label for the French version of the King of Jazz (1930) trailer.

WHAT TO LOOK FOR

Virtually all movie soundtrack discs from the 1926-30 periods are heavy shellac and 16 inches in diameter. They may be single or double-sided. After 1930, some studios shrunk the groove width to the point that discs could still contain a full reel of sound on a 12-inch diameter disc. Regardless of size, all soundtrack discs DO have the following elements:

• An arrow etched into the shellac just outside of the label. This is where the projectionist was to put the needle for a precise starting spot for the sound.

• The title and reel number of the film. This can be on the label and/or in the shellac around the label

• A studio name. With rare exceptions, this will be on the label, often with the studio logo. Most frequently encountered studios are Vitaphone, Warner Bros, Fox, MGM, Pathe, Universal, and Paramount, but there were also many others including small “B” studios” which issued discs into the 1930’s. 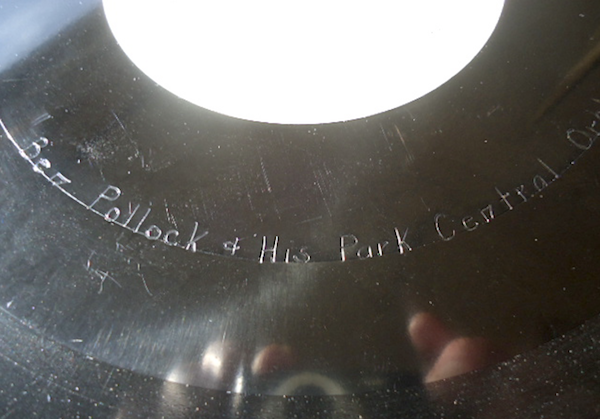 What to look for… includes usually the film title etched into the shellac around the disc label.  This is from the recently found disc for Ben Pollock & His Park Central Orchestra (’29) which features a 20 year old Benny Goodman and has just been restored by UCLA.

IF YOU FIND A DISC…

Let us know! We can verify if it is indeed a soundtrack disc and if so, discuss options. You can contact us several ways:

Photos of the label, the title, studio and any numbers are helpful.

This entry was posted in Posts by Ron Hutchinson, Vitaphone View and tagged The Vitaphone Project. Bookmark the permalink.

4 Responses to Vitaphone View: How Vitaphone Discs are Found