“The Gag Man: Clyde Bruckman and the Birth of Film Comedy” Book Giveaway (November via Facebook and Blog)

Posted on November 4, 2015 by Annmarie Gatti

Here we go…this is our Facebook/Blog version of the contest!  We will be giving away TWO copies of The Gag Man: Clyde Bruckman and the Birth of Film Comedy

by Matthew Dessem, via Facebook and our Blog this month, courtesy of The Critical Press. And don’t forget, we’re also giving away FOUR MORE copies of the book via Twitter this month as well, so please feel free to enter that contest too…

And, now for the details…

In order to qualify to win a copy of  The Gag Man: Clyde Bruckman and the Birth of Film Comedy

via this Facebook/Blog contest giveaway, you must complete the below entry task by Saturday, November 28 at 8PM EST. We will pick two winners via a random drawing and announce them on Facebook and here on this Blog the day after the contest ends (Sunday November 29).

If you’re also on Twitter, please feel free to visit us at @ClassicMovieHub for additional giveaways — because we’ll be giving away FOUR BOOKs there as well! (Click here to see what we’re giving away on Twitter.) 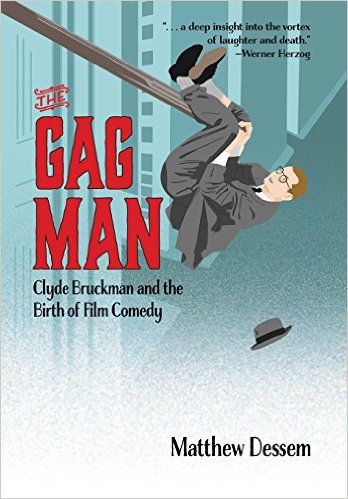 ENTRY TASK to be completed by Saturday, November 28 at 8PM EST —

THE QUESTION:
What is one of your favorite slapstick scenes?

About the Book:  Though today he is barely remembered, Clyde Bruckman was a key figure in early film comedy, collaborating with icons like Buster Keaton, Harold Lloyd, W.C. Fields, Laurel & Hardy, and the Three Stooges. Working while screenwriting was still in its infancy, Bruckman helped shape many influential shorts and films, developed the gags that made them legendary, and eventually became a director himself. But Bruckman’s own life was filled with tragedy and disappointment, from alcoholism to accusations of plagiarism, and over time his story has been relegated to little more than a footnote. Matthew Dessem’s The Gag Man is the first book-length biography of this fascinating but elusive figure. Drawing on archives, court documents, and of course the films themselves, Dessem brings Bruckman’s story to life and shines a light on an important corner of Hollywood history.

Please note that Continental United States (excluding Alaska, Hawaii, and the territory of Puerto Rico) and Canada entrants are eligible.

And — BlogHub members ARE eligible to win if they live within the Continental United States or Canada (as noted above).

And if you can’t wait to win the book, you can purchase it on amazon via the below link (click on image):

This entry was posted in Books, Contests & Giveaways and tagged The Gag Man: Clyde Bruckman and the Birth of Film Comedy. Bookmark the permalink.

13 Responses to “The Gag Man: Clyde Bruckman and the Birth of Film Comedy” Book Giveaway (November via Facebook and Blog)