Okay, it’s time for our next Twitter contest! This time we’ll be giving away TWO COPIES EACH of Manny Pacheco’s  “Forgotten Hollywood Forgotten History”

— courtesy of the author!

In order to qualify for to win one of these books via this Twitter contest giveaway, you must complete the following task by Saturday, August 1 at 8PM EST. However, the sooner you enter, the better chance you have of winning, because we will pick a winner on four different days within the contest period, via random drawings, as listed below… So if you don’t win the first week that you enter, you will still be eligible to win during the following weeks until the contest is over.

We will announce the winner(s) on Twitter @ClassicMovieHub, the day after each winner is picked at 8PM EST (for example, we will announce the first winner on Sunday July 12 at 8PM EST on Twitter). If you’re also on Facebook and want more chances to win, visit us at Classic Movie Hub on Facebook for additional giveaways — because we’ll be giving away TWO more books there as well! 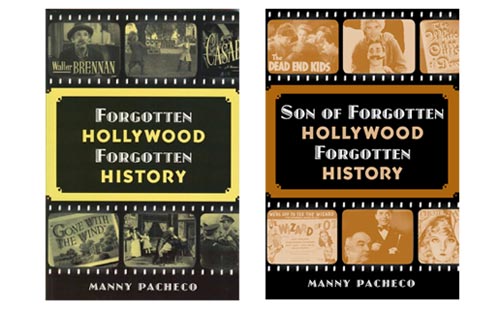 ENTRY TASK (2-parts) to be completed by Saturday, August 1 at 8PM EST — BUT remember, the sooner you enter, the more chances you have to win…

2) Then TWEET (not DM) the following message:
Just entered to win the “Forgotten Hollywood Forgotten History” #BookGiveaway courtesy of @ClassicMovieHub and @raideoman1

THE QUESTION:
Who is one of your favorite Character Actors and why?

Please note that only Continental United States (excluding Alaska, Hawaii, and the territory of Puerto Rico) and Canada residents are eligible to enter this giveaway contest. (see contest rules for further information)

BlogHub members ARE also eligible to win if they live within the Continental United States (as noted above).

If you can’t wait to win the books, you can purchase them on amazon via the below link (click on images):