Twenty-six years ago, on the thirtieth anniversary of The Andy Griffith Show’s televised debut, the citizens of Mount Airy, North Carolina, gathered for the first Mayberry Day.

A couple hundred people turned out at City Hall for the opening ceremony of what was then a one-day festival staged in Andy Griffith’s home town. The mayor arrived dressed as Mayor Stoner, his Mayberry counterpart. The Mount Airy High School chorus sang the Andy Griffith theme a cappella.

Much has changed since then. The 27th Mayberry Days, which opens on Sept. 21, occupies five days of the calendar and sits at the center of an $80 million tourist industry in little Surry County. The annual fete now draws twenty-five thousand of the most devoted Andy Griffith Show fans to the real-life Mayberry.

Here is how I described the 2012 festival, which I attended, in my book Andy and Don:

At 10:00 a.m. Friday, the stage of the Blackmon Amphitheatre filled with an ensemble of Mayberry royalty: character impersonators, descendants of dead cast members, and a few frail souls who once played actual parts on Andy’s show. . . . Downtown, an entire fleet of Ford Galaxie 500s had been parked along Main Street at regular intervals. The lines at Barney’s Café and Opie’s Candy Store snaked out their doors. Those stores were modern Mayberry replicas; Walker’s Soda Fountain was the real thing, open since 1925. Andy Griffith had worked there one summer as a bicycle delivery boy, back when it was a pharmacy.

For a series whose last new episode aired nearly half a century ago, The Andy Griffith Show boasts a fan base of remarkable depth and devotion. Yet, there was a time when hardly anyone regarded Griffith as a particularly memorable work of television.

The tenth and twentieth anniversaries of this homespun Hollywood confection passed with little fanfare. Nostalgia took root slowly, first with the organization of an Andy Griffith Show Rerun Watchers Club in 1979, then with the publication of a scholarly, book-length study of the Griffith Show in 1981, and then with the triumphant (and top-rated) Return to Mayberry television movie in 1986. 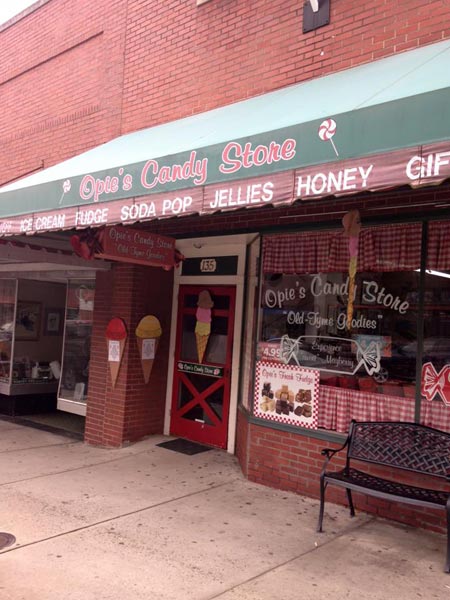 By 1990, “Mayberryana” was a booming business. The Griffith Show aired on more than one hundred stations, including superstations WGN and TBS. Millions of fans who had grown up with Mayberry videotaped reruns in earnest so that they might share them with their own children one day.

The first Mayberry Day was thrown together rather hurriedly to celebrate the impending anniversary. Here’s how I describe it in my book:

The Andy Griffith Show. But something in all that was charming, authentic. And in 1990, many still-living Mount Airians had genuine Andy Griffith stories to share. By the time the press and the public rolled in, shopkeepers had dutifully pasted photographs of Andy and Barney all over the historic downtown, and Russell Hiatt’s barbershop had been rechristened as Floyd’s.

With the passing of time, and in the absence of a remake or revival, one might have expected Mayberry Days to run its course. Observers repeatedly predicted its demise, particularly with the 2012 passing of Andy Griffith. That summer, the Wall Street Journal envisioned Andy’s death as “the beginning of the end for a tourism trade based on a show that began 52 years ago in black and white and is now in limited reruns with an aging fan base.”

Yet, Mayberry Days soldiers on, drawing upon the talents of a dwindling number of surviving Griffith Show actors, actors’ children, and character impersonators. The warmest welcome these days is generally reserved for Betty Lynn, who portrayed Barney Fife’s girlfriend, Thelma Lou, on twenty-six Griffith episodes, and who turned ninety this year. Betty makes her home in Mount Airy.

What other television show commands such a following?

I pulled up The Hollywood Reporter’s 2015 list of “Hollywood’s 100 Favorite TV Shows,” the most recent effort to rank television’s greatest works. I scanned the list for programs of the Griffith Show’s stature: The Dick Van Dyke Show, the ‘60s Emmy powerhouse from Griffith creator Sheldon Leonard, at #47; All in the Family, vanguard of the Norman Lear real-life-as-sitcom revolution in the early ‘70s, at #39; Star Trek, the ‘60s cult classic that launched a thousand sequels, at #35; The Mary Tyler Moore Show, that masterpiece of feminist comedy, at #19; The Twilight Zone, whose creator, Rod Serling, worshipped the Griffith Show, at #17; I Love Lucy, perhaps the most influential television program of the 1950s, at #8; and Seinfeld, whose namesake star seeded his scripts with little Griffith Show tributes, at #5.

Of those programs, only Star Trek seems to rival the Griffith Show for enduring appeal. And consider how many times the Star Trek brand has been reborn on television and film. There is no Andy Griffith: The Next Generation, and I suspect there never will be.

There are good reasons, I think, why the Griffith Show has never gone away. Here’s one more snippet from Andy and Don:

There is something iconic, something quintessentially American, about The Andy Griffith Show. The program appeared at a moment of dramatic flux in American society. People were leaving farms for factories and towns for cities. The civil rights movement was waxing, and antiwar protests were brewing. It was a time of assassinations, electrified music, and slackening standards on sex and drugs. Yet, the Griffith Show refused to embrace those changes, or even to acknowledge them. Instead, the program trained its gaze backward, revisiting and reviving the rural Americana of the 1930s. . . . The Griffith Show helped viewers recall a simpler time, helped them reconnect with their own past, at a moment when Americans desperately needed the reminder.

I searched the Hollywood Reporter’s list for The Andy Griffith Show, but I could not find it. Evidently Andy Griffith is not one of Hollywood’s 100 Favorite TV Shows.

And that reminds me of a quote once attributed to the late, great Dick Linke, Andy’s longtime manager.

“You can have New York and Los Angeles,” Dick told a reporter from TV Guide. “Give me the rest of the country, the mashed potato belt.”

Daniel de Visé will be traveling to Mount Airy, birthplace of Andy Griffith, to sign copies of his book Andy and Don at 1 p.m. on Friday, September 23, during the annual Mayberry Days festival. The venue is Pages Books, Mount Airy’s bookstore, located on Main Street in the historic downtown.

Daniel is Don Knotts’ brother-in-law.  Andy and Don is a lively and revealing biography and the definitive work on the legacy of The Andy Griffith Show and two of America’s most enduring stars. The book features extensive unpublished interviews with those closest to both men and a wealth of new information about what really went on behind the scenes. Click below to purchase Andy and Don on Amazon.

This entry was posted in Posts by Daniel de Vise, TV Roles and tagged Andy and Don: The Making of a Friendship and a Classic American TV Show, The Andy Griffith Show. Bookmark the permalink.