Yay! The contest is over and the winners are: Millie and Javier! Congratulations!

Okay, now it’s time for the Facebook/Blog version of our Kino Lorber Holiday Giveaway Contest! This time we’ll be giving away two Holiday Classics via Facebook and this blog, courtesy of Kino Lorber. Each of our two winners will be able to choose their prize from the three titles listed below. And, remember, we’re also giving away EIGHT MORE DVDs/Blu-Rays via Twitter this month as well, so please feel free to enter that contest too…

In order to qualify to win this prize via this Facebook/Blog contest giveaway, you must complete the below entry task by Saturday, January 6 at 10PM EST. We will pick our two winners via a random drawing and announce them on this Blog the day after the contest ends (Sunday January 7).

If you’re also on Twitter, please feel free to visit us at  @ClassicMovieHub for additional giveaways — because we’ll be giving away EIGHT MORE Kino Classics there as well! PS: you don’t even need a twitter account to enter! (Click here for twitter contest details) 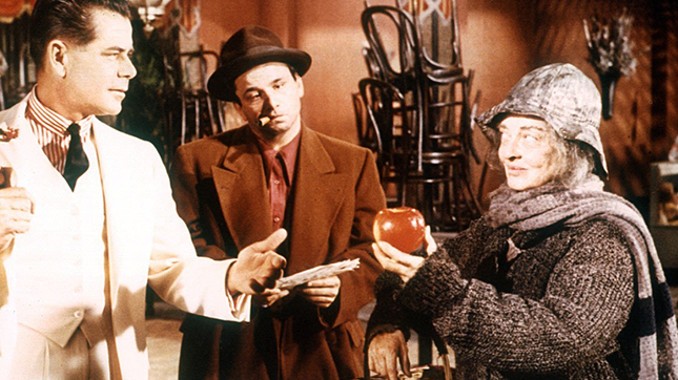 ENTRY TASK to be completed by Saturday, January 6 at 1oPM EST —

THE QUESTION:
What is one of your favorite holiday movies and why? (does not have to be one of the prize titles)

The Lemon Drop Kid (1951): Blu-Ray or DVD available. Comedy legend Bob Hope (My Favorite Brunette) stars as Sidney Milburn (A.K.A. The Lemon Drop Kid, named so after his love of the simple candy), a con man who offers a friendly “sure thing” horse tip to the girlfriend of mobster Moose Moran (Fred Clark, Visit to a Small Planet) at the race track. When the horse loses and Moose’s original pick wins, Moose gives Sidney until Christmas to pay back the money he lost or his thug, Sam the Surgeon (Harry Bellaver, Naked City), will “open up” Sidney after Christmas. To pay back the money he owes Moose, Sidney enlists some pals to hit the street corners of New York dressed as Santa Claus accepting donations for a bogus elderly ladies’ home, but soon after, gangster Oxford Charlie (Lloyd Nolan, The House on 92nd Street) tries to move in on Sidney’s scam. What follows is vintage Hope shenanigans, highlighted by a heart-warming rendition of the Christmas classic “Silver Bells” sung by Hope and Marilyn Maxwell (Lost in a Harem). Also starring William Frawley (I Love Lucy) and Tor Johnson (The Black Sleep).

I’ll Be Seeing You (1944):  Blu-Ray or DVD available. Hollywood greats Ginger Rogers (Swing Time), Joseph Cotten (The Third Man) and Shirley Temple (Since You Went Away) top a stellar cast in this tender wartime love story about two troubled strangers who long for a normal life, meet by chance and try to crowd a lifetime of love and laughter into eight days. Studded with brilliant performances, I’ll Be Seeing You manages to ambush your emotions and hasten your heartbeats. After serving half of a prison sentence for accidental manslaughter, Mary Marshall (Rogers) is allowed a holiday furlough to visit her family. Keeping her history a secret, she falls in love with a kindhearted G.I. (Cotten) who’s struggling to overcome post-traumatic stress disorder. This David O. Selznick (Duel in the Sun) holiday classic features stunning cinematography by Tony Gaudio (The Adventures of Robin Hood) in glorious black-and-white and wonderful direction by William Dieterle (Portrait of Jennie).

Pocketful of Miracles (1961):  Blu-Ray or DVD available. Capricious, winsome, whimsical, and all together delightful! Superbly directed by the peerless Frank Capra (It’s a Wonderful Life), this remake of Lady For A Day is pure Hollywood magic – an unforgettable combination of comedy, whimsy and romance that was nominated for three Oscars including Supporting Actor (Peter Falk, TV’s Columbo), Costume Design, and Original Song. Impoverished Broadway peddler “Apple Annie” (Bette Davis, All About Eve) has a problem, her daughter Louise (Ann-Margret, Tommy), educated abroad since infancy, is coming for a visit and bringing her wealthy fiance with her. The problem is that Louise has believed all her life that Annie’s a wealthy dowager, and the poor old women doesn’t know what to do. Enter “Dave the Dude” (Glenn Ford, 3:10 to Yuma), a kindhearted racketeer who enlists the aid to pass Annie off as a high-society granddame so Louise can marry her fairy-tale prince and everyone can live happily ever after! This Christmas classic was the final film in Frank Capra’s glorious career and featured a great supporting cast that included Hope Lange, Arthur O’Connell, Thomas Mitchell, Edward Everett Horton and Barton MacLane.