“There is no such thing as a bad boy” – Father Edward J. Flanagan

That’s right, there’s no such thing as a bad boy — or is there?  Well, well, well…that brings me to my getTV Mickey Rooney Blogathon pick: Boys Town.

Why Boys Town? This should be an easy question to answer, right? Especially because I voluntarily picked it for my Blogathon post! But, as strange as it may seem, when I sat down to write this post, I found myself struggling with this question.  You see, Boys Town, for me, was never one of those films that I ran out to buy on DVD (still don’t own it to this day); it’s never been one of those films that I found myself streaming when I had time to kill (until today of course), and it was never one of those films that I purposely searched for in television listings.  As a matter of fact, I probably haven’t seen this film more than five times in my entire life.  So, why is it that I know every inch of this film? Why do I know every character, every scene? Why can I perfectly re-create pivotal scenes in my mind’s eye with no effort at all???  What is it about this film that has etched itself so indelibly in my mind and heart??? Well, I had to purposely watch it again to figure that out… so thank you getTV Mickey Rooney Blogathon! 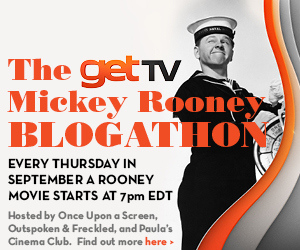 1) It shines a light on the wonderful ‘real life’ Father Edward J. Flanagan and his tireless efforts to help homeless, abandoned boys

2) The ever-steady presence of Spencer Tracy as Father Flanagan

3) Mickey Rooney’s portrayal of Whitey Marsh, a tough guy who turns out to be not-so-tough after all…

That said, for this Blogathon, I’d like to share some scenes with you of Whitey’s rocky road to adulthood… 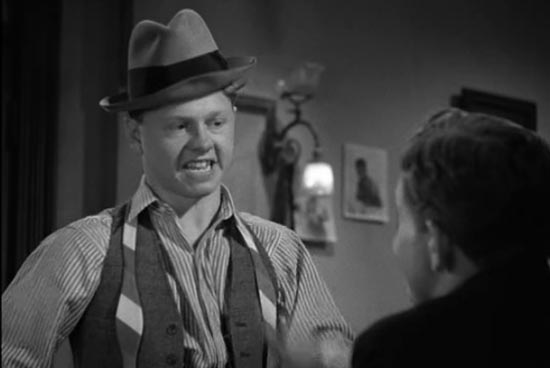 Tracy: I’m Father Flanagan. I saw your brother Joe just a little while ago. We had a long talk about you Whitey. Joe wants you to come with me to Boys Town.
Rooney: You’ve got a swell chance taking me to that joint… What am I going to do in a broken down nursery like Boys Town? 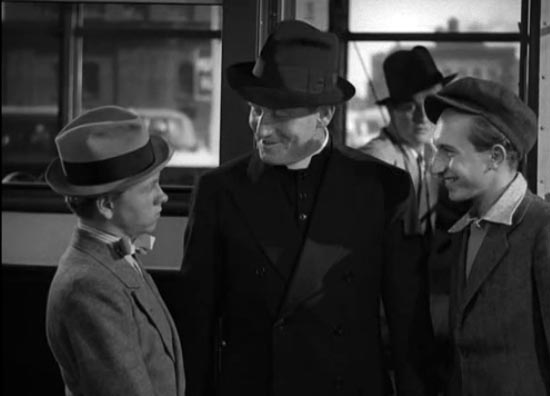 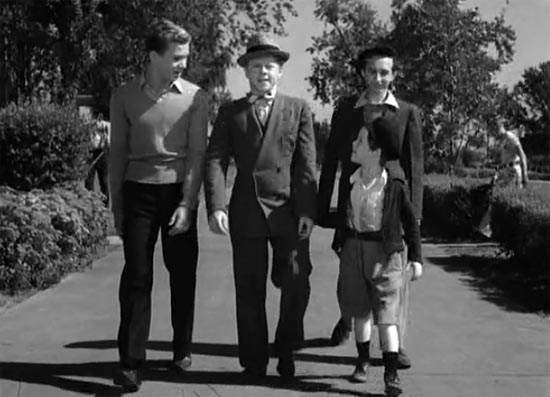 Freddie: On a clear day you can see Omaha from here.
Whitey: Yeah? Then what’d you got?

Whitey: A guy would be a dope to try to do anything around here with 200 spies ready to run and tell teacher on him.
Freddie: There’s no squealing. Whenever you do anything wrong, you just go to Father Flanagan and squeal on yourself.
Whitey: Hey you wanna know something? I think you and Father Flanagan and this whole joint is screwy. 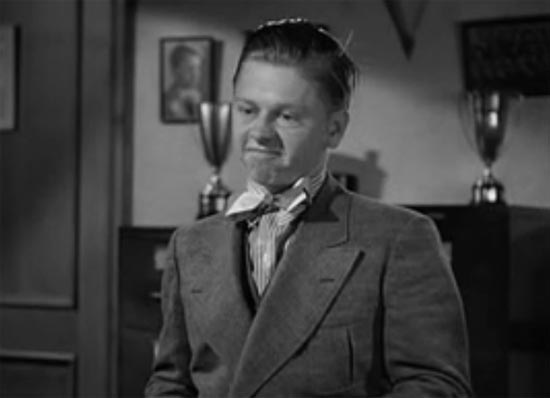 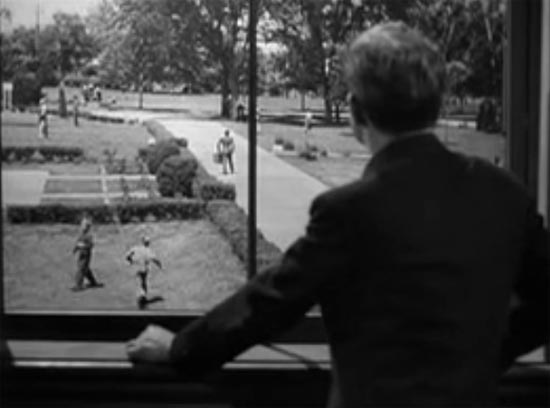 Father Flanagan: We have a boy in trouble… 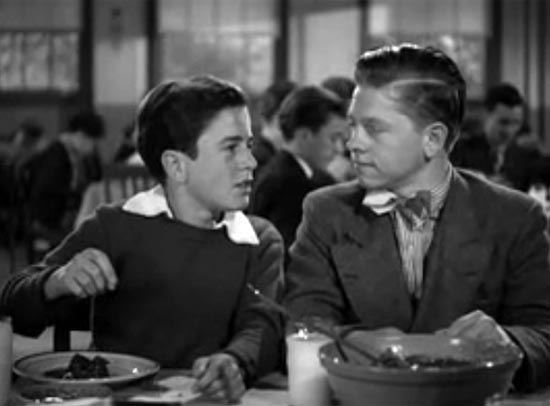 Freddie: The bell saved you, didn’t it buddy. 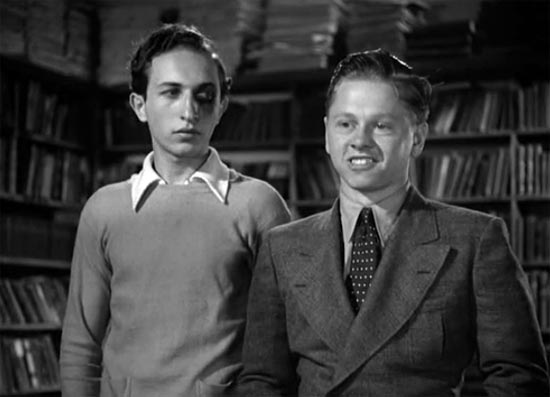 When Whitey’s temper gets the best of him, Whitey and Mo must appear in Boys Town Court.

Freddie: Who struck the first blow?
Whitey: The first blow??? What, are you kidding, there was only one blow. 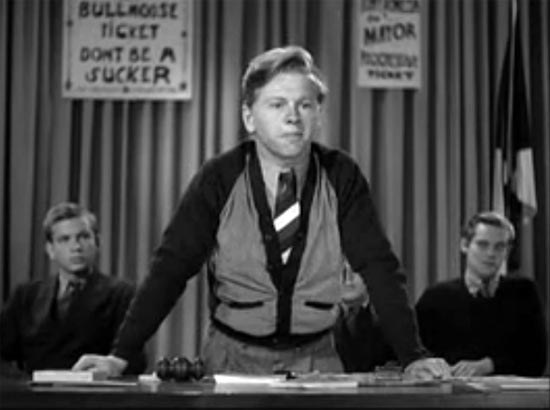 Whitey runs for Mayor, not because he cares, but because he wants the fringe benefits… incidentally, he’s running under the ‘Don’t Be a Sucker” ticket.

Freddie: He’s run a campaign rotten with lies and mud, and promises that he knew were lies when he made them!

Whitey: I think you and Tony are a pair of dirty double-crossing guys! 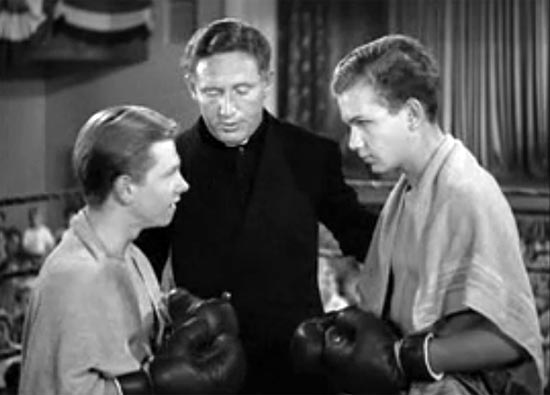 Whitey and Freddie try to solve their differences in the ring… 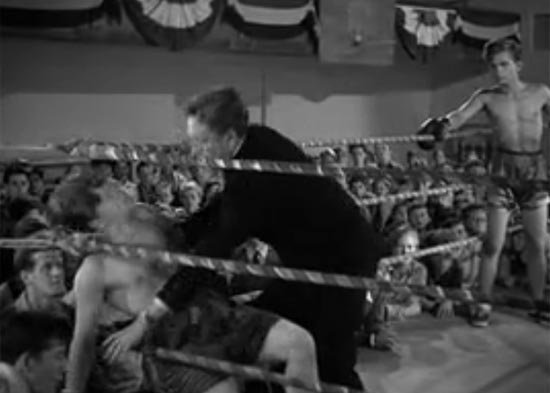 …and Whitey is knocked out!!! 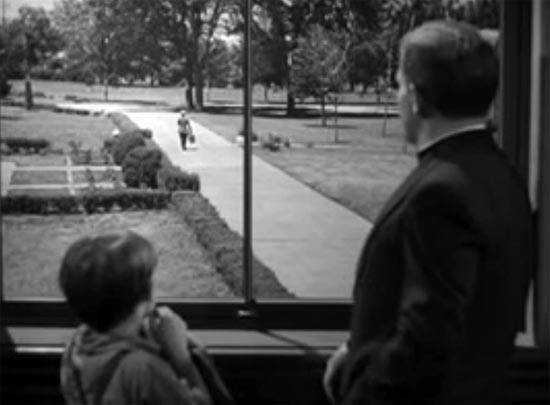 Whitey is ‘clearing out’… 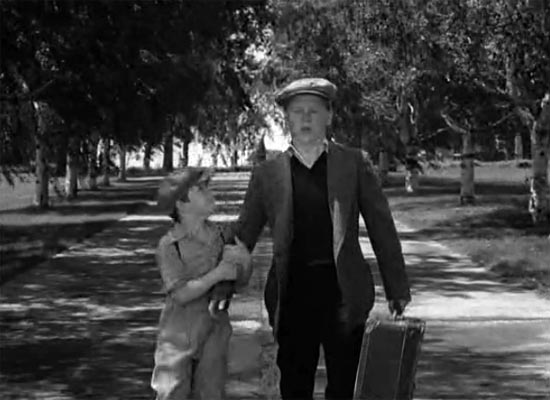 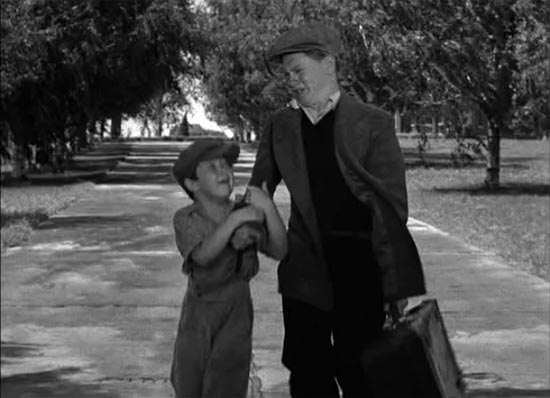 Get out your handkerchiefs! Pee Wee begs to go with Whitey, and they both burst into tears. Admittedly, my favorite scene in the entire movie. 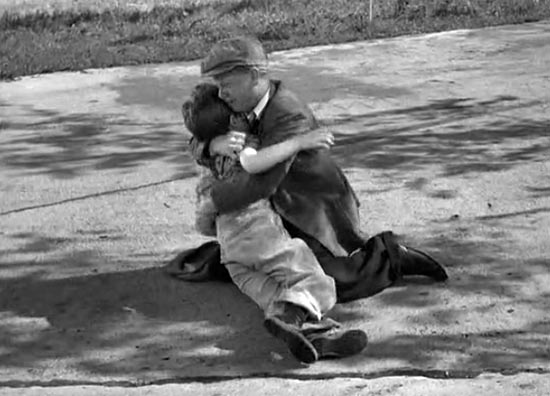 Pee Wee runs after Whitey and gets hit by a car. (Hope you still have that hankie!) 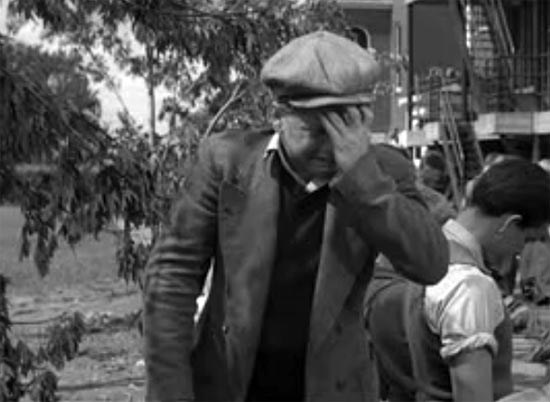 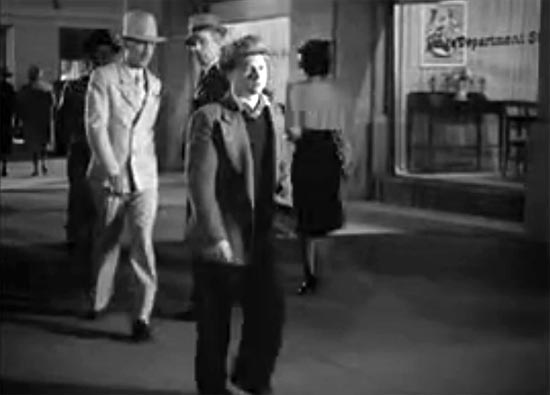 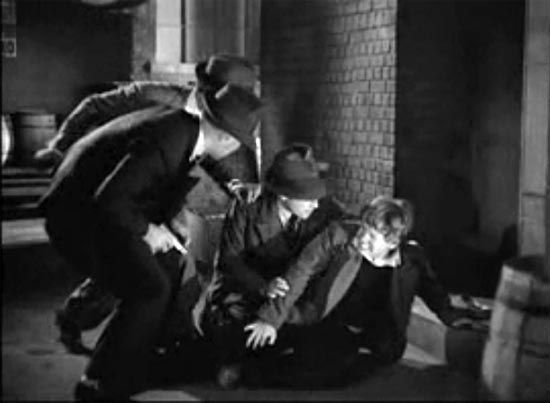 Whitely stumbles upon a bank robbery, gets shot in an alley, and runs into his criminal brother, Joe (Edward Norris)… 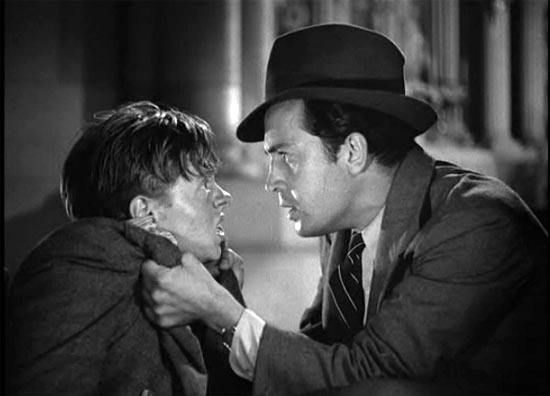 Joe: You’ll be okay, just lie still. What are you doing out of school?
Whitey: I walked out
Joe: You walk back. Get me. You’re going straight. That’s why I put you there.

Joe: Listen Whitey. No squawking or squealing… Don’t talk ’til you’re dead sure I’m away…

Now, I don’t want to ruin the ending for you, but suffice it to say that Whitey has some very serious choices to make… and he makes them… and although things do look bleak for a while, we do learn, after all, that… “There is no such thing as a bad boy”

Now, just for fun, here are a few behind-the-scenes photos: 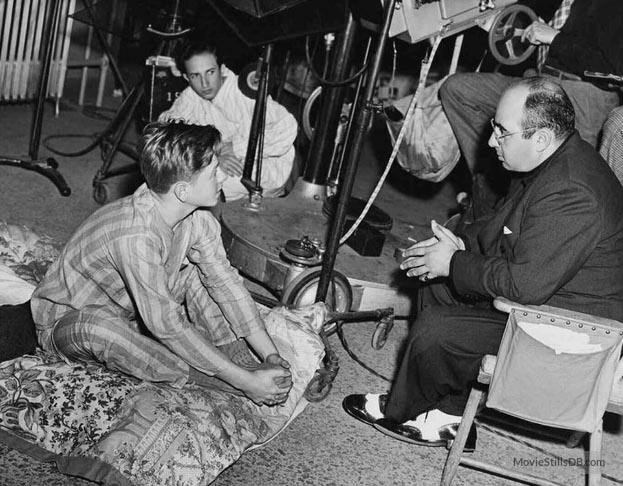 Mickey Rooney with director Norman Taurog and Sidney Miller (in the background), on the set of Boys Town 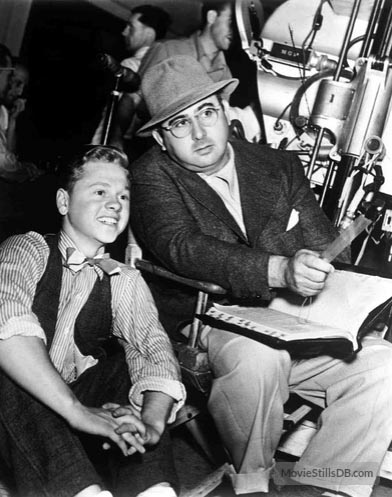 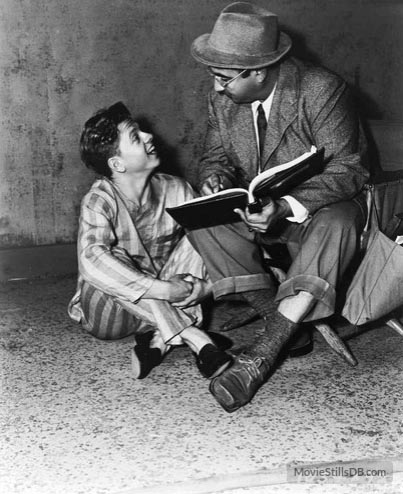 And, Rooney again with Taurog

And, last but certainly not least… 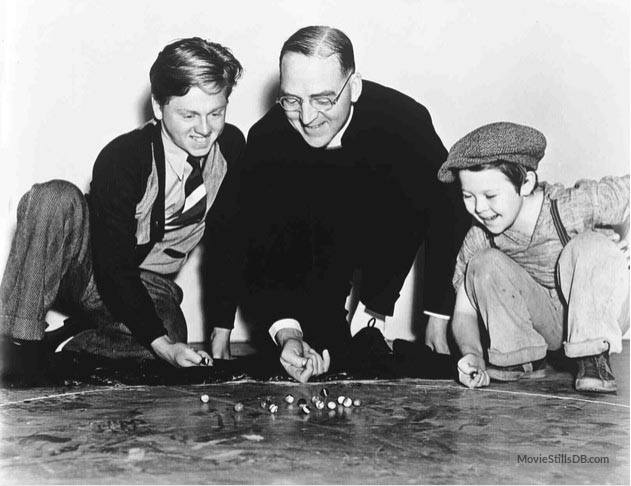 This post is part of The getTV Mickey Rooney Blogathon hosted by Once Upon a Screen,Outspoken & Freckled and Paula’s Cinema Club taking place throughout the month of September. Please visit the getTV schedule for details on Rooney screenings throughout the month and any of the host sites for a complete list of entries.

And please don’t forget to check out the other fabulous Blogathon entries via one of the above three host sites!

This entry was posted in Blogathons, Posts by Annmarie Gatti and tagged gettv, Mickey Rooney Blogathon. Bookmark the permalink.