Walking in the Steps of Laurel and Hardy!

The Music Box Steps have long been high on my list of must-see classic movie sites. But, even I was surprised by the overwhelming giddiness I felt when my doppelganger film-fan-friends* and I piled into a car and commenced on our quest to find the infamous steps — armed with sheer will, a sense of adventure, and (thankfully) our trusty little GPS! About an hour later, as we tentatively drove around a corner with all eyes peeled, the anticipation was unbearable, and I do not exaggerate when I say that we all let out super-duper squeals of delight, when we realized that, YES indeed, we had actually found the steps!!!

For me, the The Music Box (1932) is an iconic Laurel and Hardy film – and one that is hard to forget. To this day, I still can’t help but gasp and laugh-out-loud as Stan and Ollie meet comical characters and calamities while they attempt to deliver a piano to “1127 Walnut Avenue” – the house “right on top of the stoop” (understatement). Watching Stan and Ollie ‘heave ho’ all the way up to the tippy top of the ‘endless’ stoop, huffing and puffing from exhaustion — and then seeing the piano always somehow manage to roll back down the entire staircase, pinging and panging and plummeting to the ground, never ceases to amuse me.

And, I’m sure I’m not alone in my laughter, because the film won the first Academy Award for Live Action Short Film (Comedy) in 1932, and 65 years later (in 1997), it was selected for preservation in the United States National Film Registry by the Library of Congress as being “culturally, historically, or aesthetically significant.”

That said, I am happy to share some pictures from the film itself, as well as from our giddy and glorious adventure… 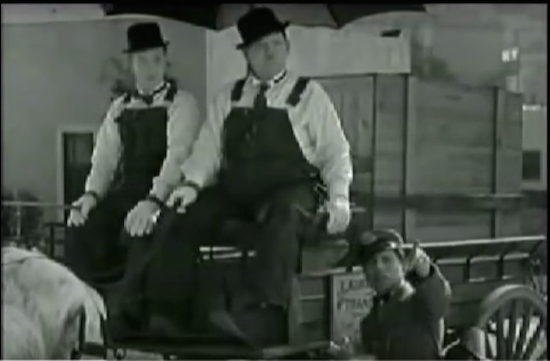 Pardon me Mr. Postman. -Ollie
Yes Sir. -Postman (Charlie Hall)
Could you tell me where 1127 Walnut Ave is? -Ollie
1127 Walnut Ave? -Postman
Yes Sir. -Ollie
That’s the house up there, right on top of the stoop. –Postman 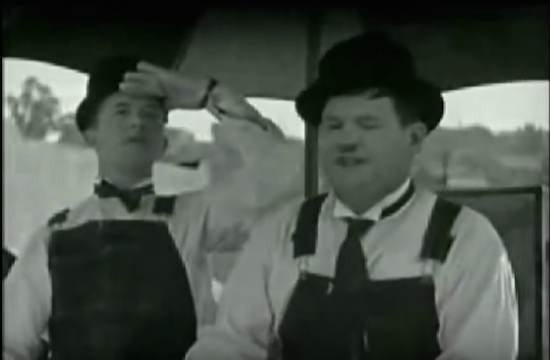 That’s the house right there. Right on top of the stoop. -Ollie

And what a stoop it is! 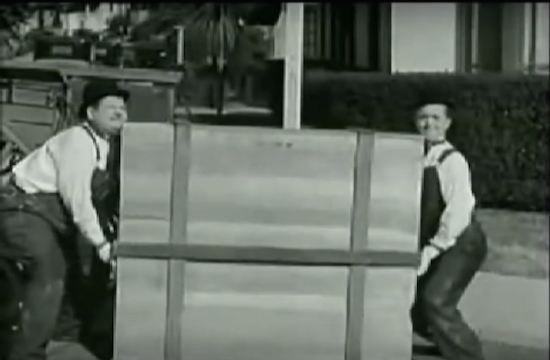 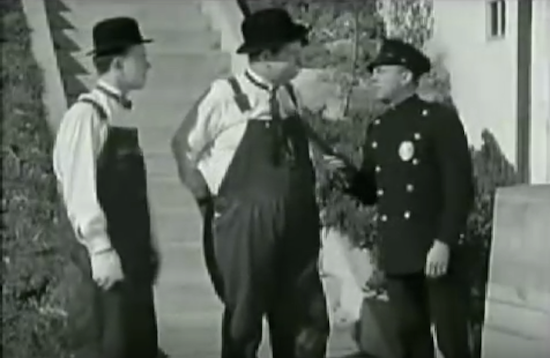 Now, let that be a lesson to you! – Officer (Sam Lufkin) 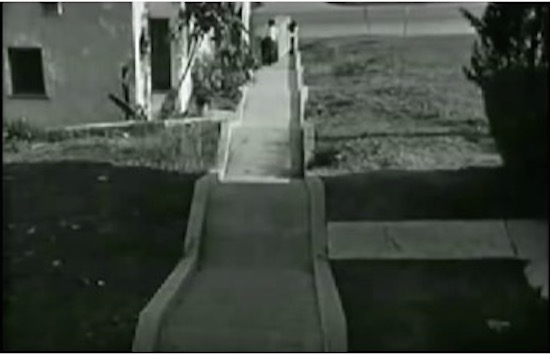 The inevitable long, hard road down… 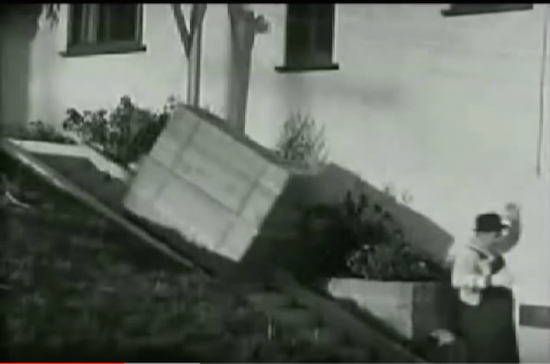 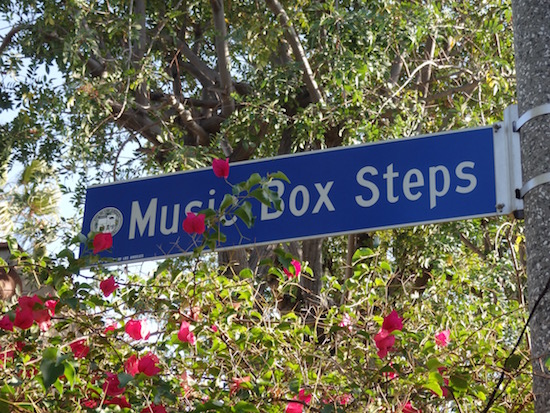 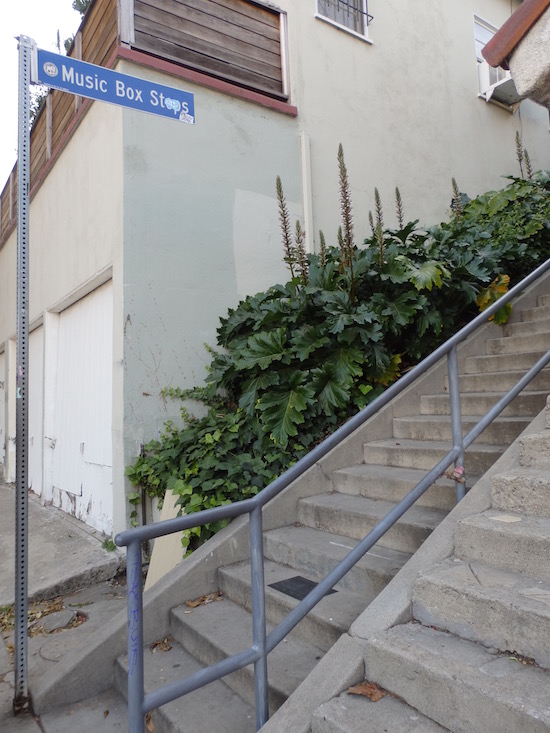 The Music Box Steps street sign at the bottom of the staircase (923-925 Vendome Street), across from Laurel and Hardy Park [photo: (c) 2016 Classic Movie Hub] 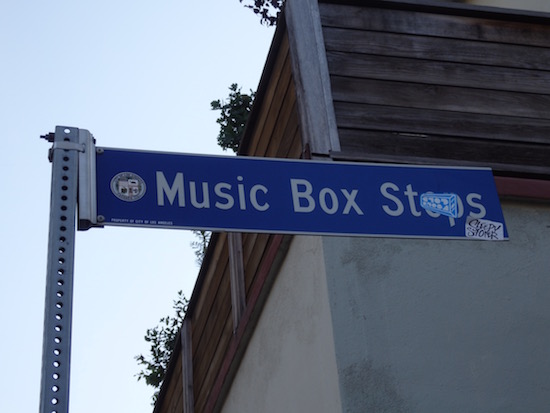 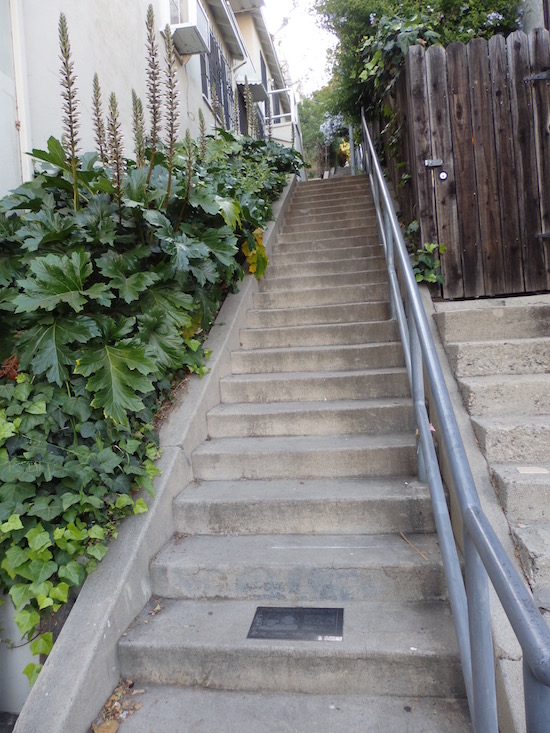 And the plaque which reads:

This plaque marks the site of the making of “The Music Box,” winner of the 1932 Academy Award for Short Subject – Comedy. The film starred comic legends Stan Laurel and Oliver Hardy, who also employed this location in their 1927 film “Hats Off.” Both films were produced by the Hal Roach Studio.

Now for a short film of our adventures as we ‘walk the walk’ down the legendary steeps..

A big thank you to my fabulous film-fan-friends for such an incredibly fun day: @CitizenScreen, @IrishJayHawk66, @SantaIsThinking and last but certainly not least @NebraskaNellie!

One Response to Classic Movie Travels: The Music Box Steps