Marlon Brando looks good on a motorcycle, really good.  But beyond Brando’s iconic bad-boy biker look and the exhilarating sounds of the roaring throttles, what’s appealing to me most about The Wild One is the philosophy behind the ‘rider’ and the consequences of taking things too far. 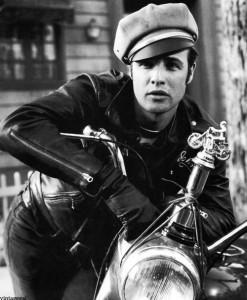 The movie starts with a motorcycle gang riding into, and ‘stirring up,’ a small community. A bit of trouble ensues and the bikers are told to remain in town for a few days. They kill some time at the local cafe-bar where biker leader, Johnny (Marlon Brando), meets small-town girl Kathie (Mary Murphy) and tells her about the riding lifestyle, “Man, you are too square. I’m… I… I’ll have to straighten you out. Now, listen, you don’t go any one special place. That’s cornball style. You just go.”

Johnny is clearly referring to the biker philosophy — the ultimate freedom of the road — being able to go anywhere on a whim, with no attachments, no responsibilities and no obligations — to be liberated from conventional constraints. This philosophy is echoed by the anti-establishment ideology of the gang (no matter what that ‘establishment’ is) and clearly portrayed when Johnny is asked “What are you rebelling against, Johnny?” to which he responds, “What do you got?” While this freedom is at first appealing, it is inherently unstable. As the biker gang continues to linger in the town, this ideology of ‘fun and games’ turns into the harsh brutality of mayhem and destruction. This climaxes when an innocent bystander of a mob ‘in it’ for Johnny dies under the gang leader’s bike. 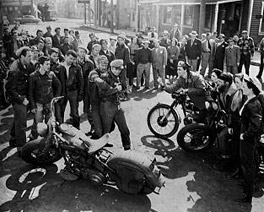 Rebelling against the ‘establishment’ serves yet another purpose for Johnny, and potentially for Kathie — escape. After her first ride on a motorcycle with Johnny, Kathie says “I’ve never ridden a motorcycle before. It’s fast. It scared me. But I forgot everything.” She then asks, “Is that what you do?”

Mary Murphy longing for escape after her first motorcycle ride.

For a true motorcycle rider, one of the main pleasures of riding is to forget. It’s a way to avoid dealing with the complications of life. The film hits on this issue dead on. But what happens if you keep running away from conflict and never deal with real life? Or if you become so good at ‘forgetting’ everything that you just never connect with anyone? The only thing that Johnny seems to be able to really connect with is his bike. He’s just unable to ultimately deal with real-life human relationships and the vulnerabilities of the human heart. In the end, it’s easier for Johnny to maintain his love affair with his bike, leaving all else behind (including Kathie, even though he cares for her). So what came first? Johnny’s intense love of riding which prevents him from connecting with anyone on any real human level or Johnny’s inability to connect with anyone on any real level which fuels his riding addiction? 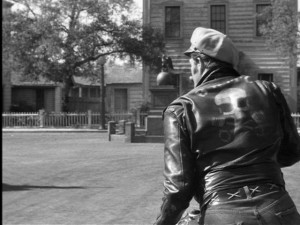 One Response to Classic Movie Motorcycles: The Wild One (Guest Post)