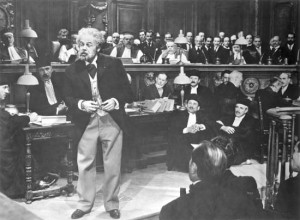 Other Nominated Films:
The Awful Truth, Captains Courageous, Dead End, The Good Earth, In Old Chicago, Lost Horizon, One Hundred Men and a Girl, Stage Door, A Star is Born

I’m going to be completely honest, there are just some films that are harder to write about than others. Previous films on my countdown list, such as Around the World in 80 Days and The Broadway Melody, were easy to write about since, as films that are full of excitement, they’re fun to watch. Then, a film such as The Life of Emile Zola comes up, and I find myself struggling. It’s not because it’s a bad movie, since it really isn’t. In fact, it’s a very, very good film. I find the difficulty in writing about it is because…well…it’s just one of those movies. We’ve all seen them before — we watch and admire what’s on the screen, but when it comes to actually discussing the movie, our whole vocabulary is thrown out the window. That’s how I feel about The Life of Emile Zola. Since I’m having my own trouble coming up with the words to say, I’m just going to have to steal from someone who can say them better. Here are a few quotes from the original New York Times review that was published on August 12, 1937:

“The Warners, who have achieved the reputation of being Hollywood’s foremost triflers with history, paid their debt to truth last night with the presentation of The Life of Emile Zola at the Hollywood Theatre. Rich, dignified, honest, and strong, it is at once the finest historical film ever made and the greatest screen biography, greater even than The Story of Louis Pasteur with which the Warners squared their conscience last year.”

“…[The Life of Emile Zola] has followed not merely the spirit but, to a rare degree, the very letter of his life and of the  historically significant lives about him. And, still more miraculously, it has achieved this brilliant end without self-consciousness, without strutting glorification, without throwing history out of focus to build up the importance of its central figure.”

Thank you Frank S. Nugent for letting me borrow your words. I couldn’t have said it any better myself. The Life of Emile Zola is an honest depiction of the man in its title. William Dieterle is able to keep the spirit of Zola alive without having to fabricate many details. Paul Muni, who was nominated for his portrayal of the French author, is astonishing, and not just for his extraordinary performance, but because he looked exactly like the man. There really couldn’t have been a better choice for the role. The Life of Emile Zola would become the second biographical film to win Best Picture and the first film to receive 10 Academy Award nominations.

Émile Zola: What does it matter if an individual is shattered – if only justice is resurrected? 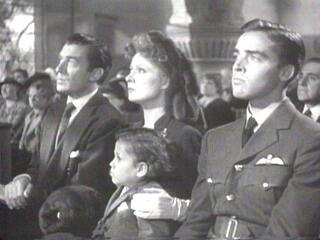 Mrs. Miniver is one of the most inspirational war-time movies in all of history, and I will never hesitate to say that. I could focus on all of the superb cinematic aspects of the film, but the biggest, most important reason this film won Best Picture was because of its overall message. It was a film about sticking together through the tough times of war. And it was such an effective propaganda film that President Roosevelt ordered it to be rushed to theaters for that purpose. In 2009, Mrs. Miniver was selected to the National Film Registry for the following reasons:

“This remarkably touching wartime melodrama pictorializes the classic British stiff upper lip and the courage of a middle-class English family (headed by Greer Garson and Walter Pidgeon) amid the chaos of air raids and family loss. The film’s iconic tribute to the sacrifices on the home front, as movingly directed by William Wyler, did much to rally America’s support for its British allies. “Mrs. Miniver” won six Oscars including Best Picture, Best Director and Best Actress.”

The most compelling scene in this movie is at the end, when the townspeople assemble at a church which has been destroyed by the war and their vicar (Henry Wilcoxon) gives one of the most powerful speeches in all of cinema. This scene alone would have been enough to propel any film towards a nomination for Best Picture but, with the true-to-life screenplay, the overpowering performance of Greer Garson and the expert direction of William Wyler, Mrs. Miniver has become an experience that I will never forget. It’s also fun to note that when Greer Garson accepted her award for Best Actress, she gave a speech that ran for five-and-a-half minutes. So, if you ever wonder why there is now a 45 second limit to give your speech, you can thank Greer Garson.

Vicar: We, in this quiet corner of England, have suffered the loss of friends very dear to us – some close to this church: George West, choir boy; James Bellard, station master and bell ringer and a proud winner, only one hour before his death, of the Belding Cup for his beautiful Miniver rose; and our hearts go out in sympathy to the two families who share the cruel loss of a young girl who was married at this altar only two weeks ago. The homes of many of us have been destroyed, and the lives of young and old have been taken. There is scarcely a household that hasn’t been struck to the heart. And why? Surely you must have asked yourself this question. Why in all conscience should these be the ones to suffer? Children, old people, a young girl at the height of her loveliness. Why these? Are these our soldiers? Are these our fighters? Why should they be sacrificed? I shall tell you why. Because this is not only a war of soldiers in uniform. It is a war of the people, of all the people, and it must be fought not only on the battlefield, but in the cities and in the villages, in the factories and on the farms, in the home, and in the heart of every man, woman, and child who loves freedom! Well, we have buried our dead, but we shall not forget them. Instead they will inspire us with an unbreakable determination to free ourselves and those who come after us from the tyranny and terror that threaten to strike us down. This is the people’s war! It is our war! We are the fighters! Fight it then! Fight it with all that is in us, and may God defend the right.