Silent Chicago: Chariot Races and Copyright Infringement: A Tale of Ben Hur (Remakes and the Early Days of Film, 4)

Chariot Races and Copyright Infringement: A Tale of Ben Hur

In 1907, the state of the American film industry was rather poor and was still, largely, in its infancy. D.W. Griffith had just joined the industry as an actor, but he wouldn’t make his directorial debut until 1908. The Essanay company had just gotten its start and Mary Pickford wouldn’t make her film debut until 1909. The length of the movies had gotten longer, but they were still barely a reel in length, often topping out at about 10 or 11 minutes. The stories tended to be very simple, but the Kalem Company believed it could bring epic storytelling, albeit in an abbreviated form, to the big screen.

In December 1907, Kalem released “Ben Hur” as a one-reeler, consisting of 16 scenes. Wallace’s epic 500-page book had been distilled down to the biggest plot points, with intertitles employed mainly to transition between scenes, acts and settings. In typical silent film fashion (use what you have!), the crew took advantage of a chariot race being held by a local fire department on Manhattan Beach, rather than staging their own. At the time “Ben-Hur” was lauded as “the most superb moving picture spectacle ever produced in America,” and was very successful. So successful, in fact, that it pushed Lew Wallace’s living relatives to sue Kalem for copyright infringement. Up until this point, no precedent had been established for acquiring rights for films, and the subsequent court case helped to define rights acquisition and copyright protection.

While Kalem’s rather minimal effort was wildly successful, it very quickly became a dated one-reeler. Film technology advanced by leaps and bounds, especially when directors like D.W. Griffith and Allan Dwan began to pick up the microphone. Soon, the film’s wide shots, overly dramatic acting, rather simple costumes and lack of dialogue intertitles were looked upon as primitive and laughable. The material deserved another shot, and in 1922, shortly before MGM was formed, Samuel Goldwyn acquired the rights to the work. Production on the film began, but when the merger was final and Louis B. Mayer and Irving Thalberg entered the picture, the production undertook a massive overhaul. Cast and crew members were replaced until Fred Niblo was at the helm as director with Ramon Novarro cast as Ben Hur, Francis X. Bushman as Messala, May McAvoy as Esther and Carmel Myers as Iras. While location shooting in Italy was brought to an end, extravagant sets were constructed on the streets of Hollywood to continue the illusion. Technicolor excerpts were filmed for specific scenes, an incredible chariot race sequence was staged, and by the time all was said and done, the film cost $4 million dollars to complete (a far cry from the estimated $500 it took to create Kalem’s version nearly 20 years before).

The famed Chariot Race from the 1927 remake of Ben-Hur: The Tale of Christ

Although it took until 1931 for the film to turn a profit (four years after it was released), the expense was certainly worth it. It remains an incredible screen spectacle, and certainly represents the silent film industry at the height of its power. The chariot race and sea battle are exciting, thrilling and remarkably daring, leaps and bounds above the race caught on film for Kalem. Although three decades had passed before production began on the 1959 version, the silent spectacle was not far from the filmmakers’ minds.

Director William Wyler had been directing films since the mid 1920s, but he brought a unique point of view to the 1959 version of “Ben-Hur.” Though uncredited, he served in the role of assistant director during the production of the silent version and was on set for the complicated and stressful filming of the chariot sequence. He brought the knowledge and experience he gained during that time, and used the advancements that had been made since its release, to build upon an already thrilling scene, and also sought direct inspiration from the scene (and the entire film) itself. “Ben Hur: A Tale of the Christ” was 30 years old by the time “Ben-Hur” premiered, but it was still pretty fresh in the minds of the cast members. The year the film premiered, Charlton Heston quipped that he landed the starring role because “I happen to be one of two men in Hollywood who can drive a chariot. Francis X. Bushman is the other — but he’s over 70.” 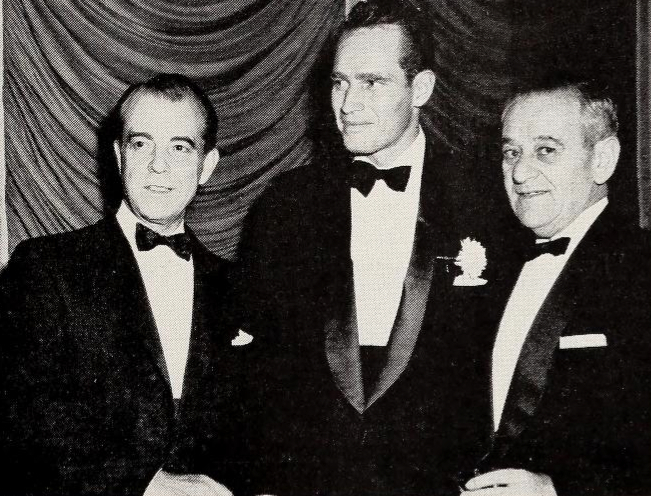 Ramon Novarro, Charlton Heston and William Wyler at the 1959 premiere of Ben Hur

Fortunately for film fans, all three versions of “Ben Hur” have survived the passage of time, and can be enjoyed pretty readily. It’s not fair to compare the three on a technical level, but each embodies the period in which it was made perfectly, and beautifully illustrate the advancements an industry made in less than a century.

Kalem’s version is available via the silent/streaming site Harpodeon, while MGM’s versions are available via Netflix and a host of other retail sites.

One Response to Silent Chicago: Chariot Races and Copyright Infringement: A Tale of Ben Hur (Remakes and the Early Days of Film, 4)