Lawrence of Arabia: Part One –The Creation of Myth 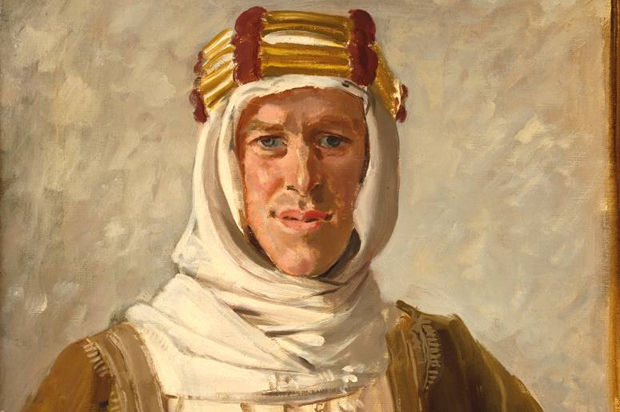 A portrait of the real Lawrence of Arabia.

We open on a lone motorcycle – the very symbol of freedom, the open road – and escape from the trappings of the civilized world. Enter frame right, an elegant, suited gentleman – the typical symbol of order, tradition, and the privileges of the civilized world. Soon enough our gentleman takes to the lone motorcycle, riding off into the back roads of the English countryside and into the arms of fate. Within moments his speed increases, and his driving, erratic, weaves into traffic with reckless abandon. His beaming smile, however, is wiped off his face as he crashes into a random ditch on a random road. Cue the church bells and the funeral scene, for the great Lawrence of Arabia has died. And just like that, a myth is born.

Davis Lean’s 1962 epic Lawrence of Arabia is one of the great milestones of cinematic history. The epic adventure tells the story of the enigmatic British Intelligence office, T.E Lawrence, and his quest to create a free and unified Arabia devoid of Ottoman influence. Despite the film’s complete lack of romance (and any speaking female characters), it’s slow, deliberate plotlines, and no clear indicator of good and evil, Lawrence of Arabia remains one of the most critically acclaimed films of our time. It would go on to gain ten Academy Award nominations winning seven including Best Picture, Best Director, and Best Editing.  What I enjoy most about the film, however, is not simply its sprawling story, or gorgeous cinematography or physiological look into the magnetic egotism that is T.E Lawrence. No, what I enjoy most about the film is both the creation and the destruction of the myth – in this case, the myth of Western Imperialism and thus the British Empire in general. 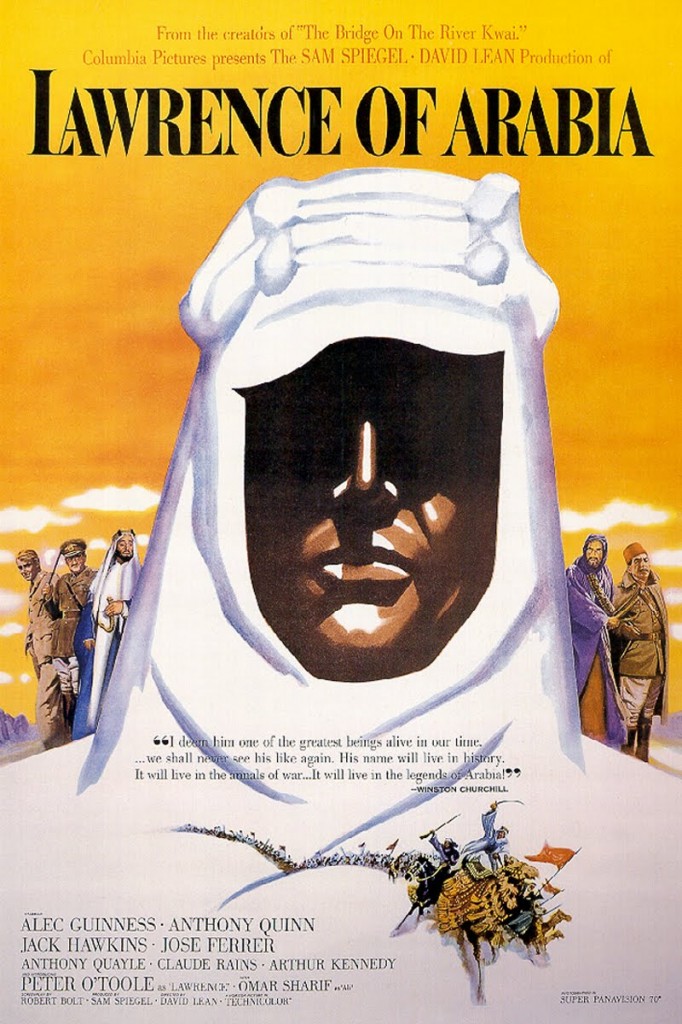 Lawrence of Arabia is a story told in two parts. The first half of the film creates and even relishes in the myth of western expansionist policies – the need to tame the unknown wilderness, proving man’s ability to overcome any challenge thrown their way and bring order to an uncivilized world. The second half of the film, however, works to deconstruct that notion, demonstrating the fallacies of western egotism in the world of turn-of-the-century global politics. Lean effectively uses every aspect of cinema available to further this notion through the creation of one of cinema’s ultimate symbols of western imperialism – T.E Lawrence. For the first half of Lawrence of Arabia, the audience is enraptured by the mysterious figure of T.E Lawrence. His character is immediately identified as a brilliant, eccentric loner; portrayed as equal parts intelligent, daring, and perhaps even mad. Despite objections from some of his immediate superiors, Lawrence is sent on a mission to the Middle East in hopes of forming a military alliance with Prince Faisal (Alec Guinness), the ruler of Syria, against the Ottoman Turks. Once he makes contact, Lawrence promptly ignores direct orders to leave the area and instead remains with the intention of leading the revolt himself. The storyline itself is modeled after the most common of all great myths – the lone romantic hero, fighting against all odds knowing in his heart that his own genius alone will persevere. 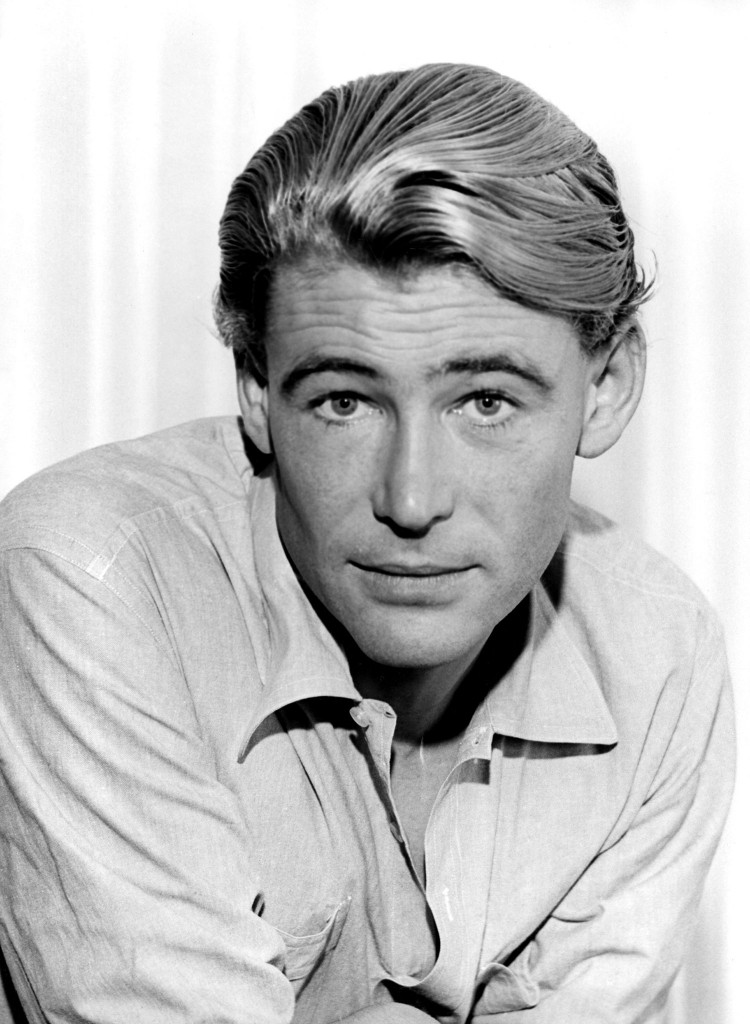 David Lean’s first act of directorial genius was casting. Although an imposing figure in history, the real T.E Lawrence was an above average looking man of about 5 foot 7 inches. Well-kempt but slight in build, the real Lawrence of Arabia could quite easily be lost in a crowd.  The cinema’s version of Lawrence, however, was decidedly different. Blonde, tall, with piercing blue eyes and a face chiseled from stone, Peter O’ Toole’s almost ungodly beautiful version of Lawrence is simply not of this earth. Although the director could have chosen the verisimilitude of a more ‘real’-looking Lawrence, myth is not based in reality, but rather, the reality history wishes to tell.  Through the sheer will and intellect of his character, O’Toole’s now god-like Lawrence is able to convince a group of volatile and uncooperative “tribe-savages” to join together and cross the Nesfud Desert in order to launch a surprise land attack on the port city of Aqaba. While the city is well defended against sea attacks, the desert acts as such a powerful natural defense that the town doesn’t even bother preparing for a land attack. During this time, the myth of Lawrence as the ultimate western hero is created. In one of the film’s more triumphant scenes, Lean combines two aspects T.E Lawrence’s real journey to demonstrate the character’s iron will and stoic sense of justice.  While Lawrence and his company of Bedouin tribesman travel across the unrelenting desert on route to an oasis, one of Prince Faisal’s tribesman, Gasim, falls off his horse during the night and is left in the desert to fend for himself. After reaching their destination, Lawrence, in all his heroic glory, refuses to leave Gasim behind, heading off into the desert alone to find his fallen comrade. When Lawrence returns, Lean furthers the film romantic notions with his skilled use of 70mm film format.

Let’s play a game: Where’s Lawrence? Can you spot him?

Because the myth of Lawrence ,and ultimately the myth of western imperialism, is built on the notion of man overcoming the bounds of nature, Lean understood the need to visually convey this to an audience. Thanks to his expert use of the wide-angle lens on the unapologetically cinematic 70mm format, the desert was transformed into an existence beyond simple geography. Bleak and ever expansive, beautiful in its mystery, the desert served as both setting and character, creating the oppressive mood that Lawrence must fight to overcome. In the scene where he returns from his seeming suicidal rescue mission, the camera remains fixed while Lawrence slowly approaches. The rising heat of the desert sands create Technicolor flames of illusion, making Lawrence appear as a mirage in the distance. Eventually, in true hero form, he makes it past the rising heat and emerges from the desert with his fallen comrade. Of course, this feat is later undermined when Lawrence is forced to dispense the ‘kings justice’ on the very man he has saved. After convincing Auda abu Tayi (Anthony Quinn), leader of the Howeitat tribe, to join him on his quest to defeat the Turks, one of Prince Ali’s men murders a Howeitat tribesman due to an ancient blood feud. Rather than have his camp fall into the chaos and disarray of tribal rivalry , Lawrence takes on the task of executing the murderer himself. Although Lawrence is surprised to learn it was Gasim who killed the Howeitat, that does not stop him from dispensing justice and he shoots the man he risked life and limb to save. Although the real life Lawrence was not forced to shoot the same man he rescued, that did not matter to Lean. All that mattered was the myth of the civilized ideal of the western Imperialism, able to separate petty emotions from the bigger picture of an ordered, neat society.

The stuff that myths are made of.

Of course, as we all know, the attack on Aqaba is a monumental success, completely overpowering the surprised Turkish garrison. And with this, the myth is complete. The brilliant western commander, in complete defiance of his petty, small-minded superiors, was not only able to unite the warring tribes of Arabia, but also to defeat man’s ultimate enemy: the merciless terrain of Mother Nature. One again, the West comes in and saves the day. However, as I mentioned early, Lean’s goal was not simply to create myth but to deconstructed it as well, showing the audience the false realities taught to us by the narrative of history. So, stay tuned, my loyal readers and considerer this an intermission, for the second half of this article – coming soon to ClassicMovieHub near you!

Thanks to Jeff of The Stalking Moon and Clayton of Phantom Empires for hosting this wonder blogathon event!  Be sure to check more great post at The British Empire in Film blogathon.

7 Responses to British Empire in Film Blogathon: Lawrence of Arabia