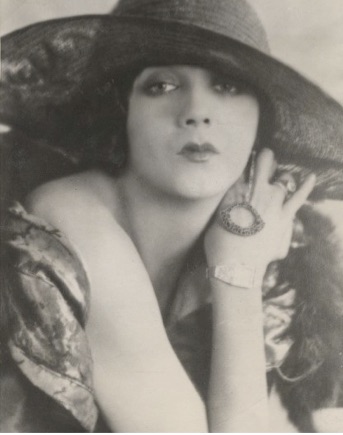 Born into an era governed by stifling Victorian mores, a time when many women led lives of submissive domesticity, Barbara La Marr played by her own rules, charted her own course through life.  Her inherent love for life and insistence upon giving vent to what she described as a “passion of expression…a pent-up restless force” which ceaselessly called to her, served as a powerful example to those yearning for alternatives.  Despite her innate talent, however, her success on multiple career fronts—dancing, screenwriting, and acting—and her ascension to worldwide fame as one of the silent screen’s foremost actresses and sex goddesses had not come easily.

She entered the world as Reatha Watson on July 28, 1896, in North Yakima, Washington, the daughter of Rose Watson, a homemaker and occasional seamstress, and William Watson, a newspaperman and irrigationist.  Her father’s positions as a reporter and newspaper editor, and proprietor of various papers throughout the Pacific Northwest and in California profoundly impacted her childhood.  As an adult, when speaking of her father’s profession and the resultant chain of migrations that dominated her early years, Reatha would recall the cheap, dilapidated boarding rooms her family inhabited, the coarse cotton clothes she wore, and laboring as a thirty-cents-per-column typesetter on her father’s newspapers.

Young Reatha dreamed of more.  She discovered her destiny at the age of eight while viewing a play with her mother in Tacoma, Washington, announcing her intention to go on the stage soon after.  Her subsequent appearance in an amateurs’ showcase hosted by the Allen Stock Company was met with booming applause and an offer to perform with the company.  Employment with other stock companies followed until her pre-teen years; having outgrown children’s parts but still too young to play adults, she was advised by a stock company manager to step down from the boards for several years.

Disheartened but undeterred, Reatha next set her sights upon motion pictures, traveling with her mother at age fourteen from their home in Fresno, California, to Los Angeles.  But Reatha’s dream of success as a film actress became a nightmare.  She was shoved into low-paying extra roles.  After rejecting the advances of certain directors, she was mistreated and, as one story goes, fired.  Then, in the wake of the sordid publicity accompanying her marriage to Lawrence Converse, a garage owner with a wife and children (she wed Converse to escape her protective parents’ authority, unaware that he was married), and his death from an operation intended to remedy his irrational behavior, seventeen-year-old Reatha was barred by studios from appearing in their films.  Reatha refused to give up.  She told a reporter that she alone determined her fate; after departing from Los Angeles, she vowed to ballroom dancer Robert Carville that she would one day return and become a film star.

Reatha as she appeared in the Los Angeles Examiner, June 10, 1914, when the press was aflame over her bigamous marriage to Lawrence Converse.

Needing to earn a living and unable to silence her gnawing ambitions, Reatha drew upon her other talents for a time.  She formed a dancing partnership—and began a romance—with Robert Carville in San Francisco on New Year’s Eve 1914.  She also reinvented herself; adopting the name Barbara La Marr, she disassociated from her scandalous past.  Together, she assured Carville, they would become famous dancers.  True to Barbara’s word, she and Carville took San Francisco by storm, performed with great success in some of Chicago’s most renowned venues, and, in 1916, made a hit headlining on Broadway.

Barbara was again forced to reassess her life in 1917.  The United States entered World War I, Carville joined the army, and cabarets, debilitated by losses of liquor revenue with the approach of Prohibition, struggled to pay dancers’ salaries.  Barbara partnered with acclaimed comedian and vaudeville headliner Ben Deely, touring the vaudeville circuits as a supporting actress in his three-person act, earning plaudits from critics and eventually receiving equal billing with Deely until dancing injuries and frequent bouts of ill health ended her vaudeville career in 1919.

Barbara pushed ahead.  Returning to Los Angeles, she took to the pen, yielding, she said, to an instinctive desire to write.  Unfazed by her lack of experience, she completed her first story in a single summer, submitted it to film studio executives, and won a $10,000 (about $138,000 today) contract with Fox Film Corporation, commencing in 1920, for six original stories, all of which appeared on screens around the world.

All the while, Barbara’s dream of being a film actress smoldered within her.  Providence intervened in 1921; following a meeting with action hero Douglas Fairbanks, she was given one of her first big breaks in films when Fairbanks cast her as the villainous Milady de Winter in his box office smash The Three Musketeers.

Her fear of being recognized as notorious Reatha Watson, and stiff resistance to her venture into film acting from Ben Deely (by this time her husband) notwithstanding, Barbara resolved to pursue a career on the screen immediately after The Three Musketeers wrapped.  By early 1922, she had landed a role in a film she later credited with having made her.  Trifling Women, directed by Rex Ingram and summarized by a film poster as “The Love Affairs of a Heartless Woman,” features Barbara as Zareda, a diabolical sorceress who leads men to ultimate destruction.  Film goers and critics were enraptured when the film was released that October; Barbara and her performance were hailed as brilliant.

Trifling Women further elevated Barbara to the realm of a rising breed of screen idol: the vamp.  The antithesis of the traditional, virtuous heroine, the vamp shamelessly used her femininity to seduce and ensnare men—and was quite a shocking figure in the early 1920s.  Barbara embraced her screen image, declaring that she had often been called something very like a vamp off the screen, and that part of the joy in womanhood “is to exercise fascinations on the male.” 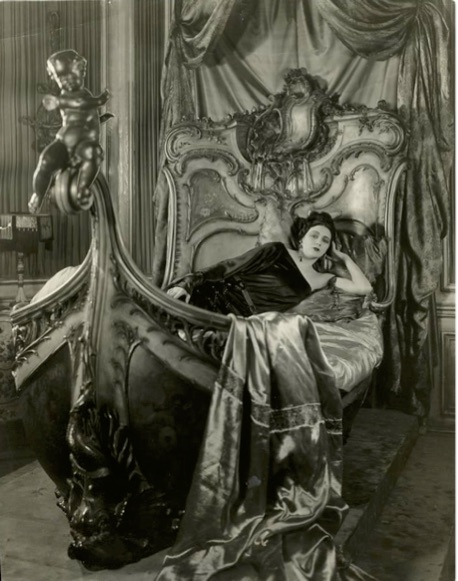 Barbara poses on a gilded bed owned by singer, dancer, and actress Gaby Deslys.  Patterned after the boat from the “Grotto of Venus” scene in the opera Tannhäuser, the bed was imported from France by director Rex Ingram and Metro Pictures for Trifling Women (1922).

In August 1923, Barbara’s prophecy that she would achieve stardom as a film actress came true.  Unrelenting work and a string of successful films netted her a five-year contract for starring pictures produced by Arthur Sawyer and Herbert Lubin’s Associated Pictures and distributed by First National, the industry’s leading distributor at the time.  Barbara’s contract, according to an announcement made by Lubin in the trades, was worth over $3 million (around $42 million today).

Barbara on the April 5, 1924, cover of Movie Weekly, one of many magazine covers she graced during the height of her fame.

Enduring stardom took every shred of Barbara’s strength.  Increased pressure to succeed and global scrutiny exacerbated her seething insecurities, spurring her alcoholism.  Her weakening lungs plagued her.  After becoming pregnant while separated from Ben Deely, she had staged her son’s adoption; amid mounting suspicions, she continued posing as his adoptive mother to avoid losing her career to scandal.  Her career nonetheless suffered during Deely’s divorce suit against her; an attempt by Herman L. Roth, Deely’s wily attorney, to blackmail her and Arthur Sawyer, her alleged lover, culminated in Roth’s sensationalized trial, the complete exposure of her infamous past, and a storm of negative publicity.  As the public began associating Barbara with her errant film persona, and sprightly flappers eclipsed vamps as the screen’s preeminent sex symbols, Barbara slipped from favor.

Beset by incipient pulmonary tuberculosis—brought on by her brutally-paced career, severe dieting methods, and tendency to “burn the candle at both ends”—, Barbara began her final film the summer of 1925, determined to complete it and make a comeback.  Disappointed with the way Arthur Sawyer (also acting as her business manager) had handled her career and heretofore denied her a say in the material chosen for her, she had insisted upon the sort of film she had been longing to make.  The Girl from Montmartre, the story of a genuine character, was a departure from the superficial vamp roles Barbara had been playing, a deviation from her typecasting.  Bolstered by her iron will, loyal fans, and critics who had applauded her talent and versatility in her sympathetic portrayals in such films as Poor Men’s Wives (1923) and Thy Name Is Woman (1924), Barbara struggled to work at United Studios each day, concealing the extent of her illness and suffering. 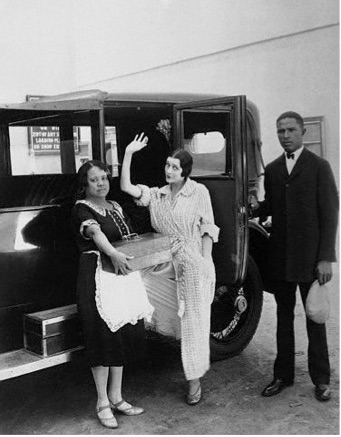 Thin and gravely ill beneath her brave front, Barbara, pictured with her maid and chauffeur, often arrived at the studio in her bathrobe throughout filming of The Girl from Montmartre (released in 1926).

As she had so many times in her life, Barbara encountered opposition.  Her doctor demanded that she retire from the screen and immediately retreat to the mountains to rest.  Her parents begged her to heed the doctor.  Her body deteriorated by the day.  She collapsed repeatedly on the film set.  Still, Barbara continued waging one of her greatest gambles—a gamble she wanted desperately to win.

Actress and writer Sherri Snyder is the author of Barbara La Marr: The Girl Who Was Too Beautiful for Hollywood; she regularly portrays Barbara La Marr in a one-woman performance piece she wrote for the Pasadena Playhouse and Pasadena Museum of History production, Channeling Hollywood; and she maintains the tribute website, www.barbaralamarr.net.