Singer/actor Harry Stockwell was a noted Broadway performer who made his feature film debut in 1935 in a film called Here Comes the Band. His most notable film ‘appearance’ however was as The Prince in Walt Disney’s animated classic Snow White and the Seven Dwarfs (1937). 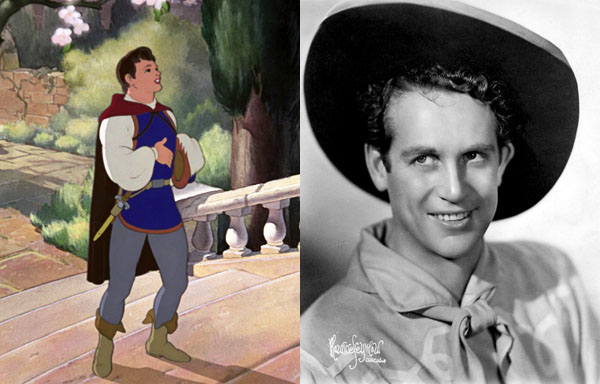 Harry Stockwell as The Prince in Snow White and the Seven Dwarfs, and as himself

“One song, my heart keeps singing, of one love only for you.”
-Harry Stockwell as The Prince in Snow White an the Seven Dwarfs

Stockwell was married to actress and vaudeville performer, Nina Olivette, however online sources are unclear as to when and how long they were married (i.e. some sources say 1952-1971 and others say 1963-1984; this is compounded by the fact that there seems to be confusion about the date of Olivette’s death).  In any event, they had two children together — actors Guy Stockwell, and most notably, Dean Stockwell.

This entry was posted in All in the Family (Family Connections), Mini Tributes, Posts by Annmarie Gatti, Voice Actors and tagged Disney's Snow White and the Seven Dwarfs, harry stockwell, snow white's prince. Bookmark the permalink.