Musical Interlude: Singing and Dance Through the Holidays

Singing and Dancing Through the Holidays
Christmas in Musicals

Music can set the mood for the holidays. While tunes may blare out of our radios, some favorites originated in movie musicals, such as the songs “White Christmas” and “Have Yourself a Merry Little Christmas.”

I’m a big fan of any holiday film, and it’s even more of a treat when you find a movie musical that has some ‘Christmas’ in it—even if the film isn’t defined as a holiday film. Here are a few holiday musicals that are holiday favorites, or relate to the Christmas holiday in some way:

Bandleader Phil Corey (Miller) and his big band have a job to perform at a ski resort in Sun Valley, Idaho, on Christmas Eve. As a publicity stunt, the band’s publicist (Berle) said pianist Ted Scott (Payne) will adopt a war orphan. The orphan ends up being a little older than anyone expects — adult ice skater Karen (Henie). Karen stowaways to Sun Valley with the band, interfering with the new romance of Ted and temperamental singer Vivian (Bari).

While not overtly a Christmas movie, I will throw it into the ring because it’s one you should see — if you can get your hands on it. There is so much going for Sun Valley Serenade:

The holidays really aren’t mentioned other than the date of the music gig, but this movie is such a treat. There is plenty of ice skating, skiing and big band music that will make you feel cozy.

Singer Jim (Crosby) and dancer Ted (Astaire) are both in love with the same girl, Lila (Dale). Lila jilts Jim and goes with Ted, so Jim decides to quite show business and live on a farm. He ends up converting his farm into a popular nightclub that is only open during the 15 holidays of the year.

If you are looking for a film to fit most holidays, Holiday Inn would be it (except for Halloween). It highlights Christmas twice, New Year’s twice, Valentine’s Day, Abraham Lincoln’s birthday, George Washington’s birthday, Easter, Fourth of July and Thanksgiving. This film even inspired the Holiday Inn hotel chain, according to hotel founder Kemmons Wilson’s obituary. Holiday Inn is notable because Bing Crosby introduced Irving Berlin’s song “White Christmas” in the film. Holiday Inn is now considered a Christmas film because of this tune, but it wasn’t marketed by Paramount as a Christmas film since it covered all holidays. I would like to give readers a heads-up: Bing Crosby does appear in black face during the “Abraham” number, which was unfortunately a popular form of entertainment at this time. Aside from that, Holiday Inn does have excellent music and highlights some other holidays we don’t often seen spotlighted in films.

The Smith family lives in St. Louis, MO, and is in a tizzy over the 1904 World’s Fair. The film follows the family through the summer of 1903, Halloween, Christmas and the summer of 1904. Throughout the year, Esther Smith (Garland) falls in love with the boy next door, John Truitt (Drake). Esther’s older sister Rose (Bremer) flirts with older men and her two younger sisters Tootie (O’Brien) and Agnes (Carroll) get into trouble. Their blissful happiness is threatened when their father (Ames) gets a job in New York.

Meet Me in St. Louis isn’t all about holidays, but the climax of the film occurs at Christmas — Esther and John love each other, Dad makes a major life decision, and Tootie beats up snowmen. The Christmas song, “Have Yourself A Merry Little Christmas” was also introduced by Judy Garland in this film, and I refuse to listen to any other rendition of that song. I love this whole film, and it truly is one of the best musicals released by MGM. This is one of those films I have watched practically since I was born and after all this time, it still hasn’t gotten old. It’s filmed in gorgeous Technicolor, filled with wonderful songs and is also quite funny. While it features a little of every season, the Christmas scene is my favorite, and I would be remiss to leave the film off this list.

Set in 1916, the Winfield family moves to a new neighborhood in town. Their tomboy daughter Marjorie (Day) falls in love with college student William (MacRae), whose ideas about education and banks don’t mesh with Mr. Winfield’s (Ames). Amidst her young romance, Marjorie’s younger brother Wesley (Gray) gets in to all sorts of trouble.

On Moonlight Bay is loosely based on Booth Tarkington’s Penrod series, though the story focuses more on Day’s character rather than the mischievous brother. This film is the Warner Bros. answer to Meet Me in St. Louis, as it features an American family at the turn of the century and is divided up by season. While this isn’t strictly a holiday film, it features a fun Christmas scene. Day is supposed to go to a Christmas dance with MacRae but breaks her leg. However, she’s too embarrassed to tell him that she broke it doing something unladylike — throwing snowballs at neighborhood boys from atop a wall. Billy Gray, inspired by a movie he saw, tells his teacher that Day broke her leg because her father was in a drunken rage — confusion and hilarity ensues. Once everyone figures out the mistake, Doris Day sings a lovely song, “Merry Christmas to All,” while Gray escapes punishment by dressing up like an angel and caroling with the kids in the neighborhood. This is such a heartwarming and family-centric film, and I adore it! 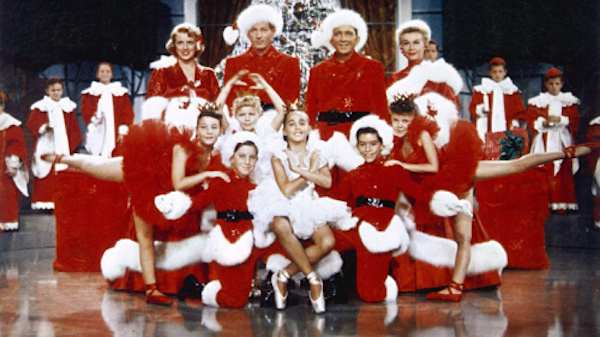 The film begins on Christmas Eve 1944, when Bob Wallace (Crosby) and Phil Davis (Kaye) are putting on a Christmas show for their outfit during World War II. They also are paying tribute to General Waverly (Jagger). Wallace saves Davis’s life, and the two partner and become successful musical performers and producers. They meet sisters of an Army buddy, Betty (Rosemary) and Judy (Vera-Ellen). The four decide to spend the holidays in Vermont at an inn where the sisters are performing. The inn happens to be owned by General Waverly, whose business is down because of the lack of snow that season. The men decide to put on a Christmas Eve show to honor him and generate business.

White Christmas is a quintessential holiday film, even though Christmas only appears twice in the film — the beginning and the end. It is supposed to be a spin-off of Holiday Inn, but I do prefer White Christmas to its predecessor. Something about its music and glamorous costumes makes me feel warm and fuzzy. I grew up with this film and it is a staple for the holiday season.

Mary Quite Contrary (Funicello) and Tom the Piper’s Son (Sands) are going to get married. But dastardly Barnaby wants Mary for himself — she is to inherit money when she marries, and Barnaby wants it. Barnaby tries to kill Tom, but the couple escapes. They find themselves in Toyland where toymakers (Wynn and Kirk) are making toys for Christmas.

Most people know I love Annette Funicello. And I want to say I love Babes in Toyland but I can’t. But I tell myself I do because this movie has so much going for it. Babes in Toyland was supposed to be Walt Disney’s own Wizard of Oz, and it didn’t quite end up that way. It actually was a financial failure. However, there are reasons to watch it: It is gorgeously filmed in bright Technicolor, the costumes are elaborate, the songs are fun – and what a cast! When Annette was married, she even based her wedding dress on the one she wore in this film. This also could be a Disney film many people haven’t seen! It admittedly isn’t really a Christmas film, but they do find people making Santa’s toys and the couple rides off into a snowy wonderland at the end. The original 1934 film with Laurel and Hardy is probably a better film — and actually features Santa — but I hold a soft spot in my heart for this film. Even though I have trouble liking it, I would still defend it in an argument.

Bitter Ebenezer Scrooge (Finney) is an ornery, unhappy old man who especially hates people and happiness, and Christmas. On Christmas Eve, he is visited by three ghosts (Evans, More, Stone) who show him his past, present and future and persuade him to change his ways before it’s too late.

This film is notable because of all the Christmas Carol adaptations since 1901, this is one of the few big screen, feature film musical adaptations of the Dickens story – the other would be The Muppet Christmas Carol (1992). Scrooge is interesting because it was released at the end of the musical era, and each number is elaborate with dancing and catchy songs — “Thank You Very Much” will be in your head for days. Finney isn’t the strongest Scrooge I’ve seen on film (for me that’s George C. Scott), but he is especially crotchety. He also makes Scrooge sympathetic and you feel sad for him. It’s also a special treat to see Alec Guinness as Jacob Marley.

6 Responses to Musical Interlude: Singing and Dance Through the Holidays