Made it Ma! Top of the World!
“Cagney” Interview with Star and Co-Author Robert Creighton

It would be no exaggeration to say that I was on ‘top of the world’ when I left the Westside Theatre in NYC after seeing the musical, Cagney. The show was exhilarating, and I walked out of the theater on cloud nine, smiling from ear to ear. What an all-around good time it was! And I will add here, that my ‘plus one’ was my mother, who is a Senior Citizen that takes her classic movies very seriously, and who was very worried that the cast was going to ‘botch things up’… Well, I am happy to report that, about 10 minutes into the show, my mother was elbowing me and whispering — wow, the actor who plays Cagney is GREAT! 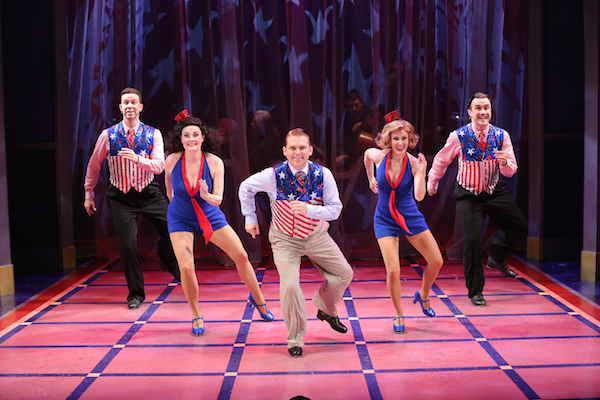 That said, after the show, I decided that I just had to interview Robert, so I circled back around to the Cagney office to ask if Robert could squeeze in some time for us, and they made it happen. So a Big Thank You to Cagney, and to Robert Creighton who so graciously and generously spent some time chatting with us for this exclusive 20-minute YouTube interview.

Robert Creighton sits and chats with us before showtime 🙂

So, for all my fellow classic movie friends and fans — if you’re ever in the NYC area, you can see the show at the Westside Theatre at 407 W 43rd Street. For more information, you can follow Cagney on Twitter at @CagneyMusical and Robert on Twitter  @RCreightonNYC.  Last but not least, you can buy tickets here at Telecharge.  Again, highly recommended…

But that’s not all… thanks to our friends at Cagney, we have a special coupon code offer for you. Use code CGLSP59 for 33% off tickets, valid for performances through January 8, 2017. 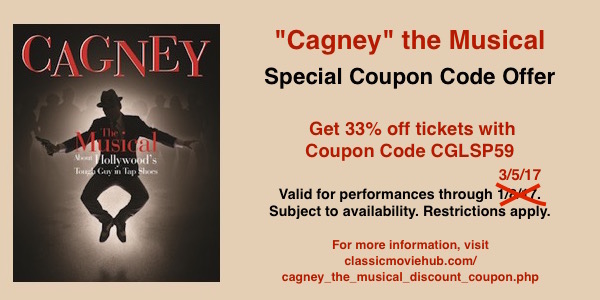 Last but not least, you can buy the fabulous soundtrack (I loved the songs from the show) on amazon via this link:

Hope you enjoyed the interview.

This entry was posted in Interviews, Reviews and tagged Cagney the Musical, james cagney, Off Broadway show Cagney, Robert Creighton. Bookmark the permalink.

One Response to Cagney, the Musical: Exclusive Interview with Robert Creighton