The Secret Life of Walter Mitty (1947): Danny Kaye Does Thurber


In many ways, it seems short stories are the best sources for feature-length films because they allow the narrative to take the spark of an idea and extrapolate and mold it into something new and hopefully ingenious in its own right. Author James Thurber didn’t seem to think that was the case read more

A Song Is Born: Fabulous Music But a Waste of Danny Kaye


Danny Kaye as Hobart Frisbee. A musical remake of Ball of Fire must have been one of the easiest pitches of all time. After all, the original 1941 comedy--penned by Billy Wilder and Charles Brackett--was about a bunch of academics writing an encyclopedia about music. Ball of Fire starred Gary Coope read more

The Funny Papers: A Love Letter to Danny Kaye

Classic Movie Hub Blog Posted by Kellee Pratt on May 29, 2018


A Love Letter to Danny Kaye “Life is a great big canvas, and you should throw all the paint on it you can.” – Danny Kaye According to my baby book, my first crush was Donny Osmond. Don’t judge – it was a different time. I think it was a combination of “Puppy Love” and assuredly read more

Silver Scenes - A Blog for Classic Film Lovers Posted by The Metzinger Sisters on Sep 19, 2017


Danny Kaye loved to try new things and was always open to learning the necessary skills and then plunging right into an experience...with no fear of making a fool of himself. With this bravado he acquired proficiency in a number of different fields over the years: flying commercial aircraft, co read more 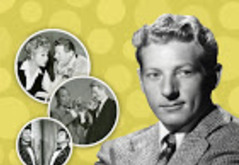 
With TV variety series near the peak of their popularity in 1963, CBS offered a new show to one of Hollywood's most versatile performers: Danny Kaye. The comedian-singer-dancer had already hosted several successful television specials, so he was an obvious choice. The Danny Kaye Show ran for four ye read more

A memorable moment with Danny Kaye.

Love Letters to Old Hollywood Posted by Michaela on Jun 25, 2015


This may be my greatest challenge yet... I found out about this blogathon and knew I had to join, but my excitement quickly turned to panic. You see, the point of this blogathon is to talk about one scene from one movie, a scene that you instantly rewinded or that you love watching so much, you driv read more

Danny Kaye Gets Up in Arms


Danny Kaye's feature-length film debut is a serviceable musical comedy intended as a showcase for its star and radio singing sensation Dinah Shore. In that regard, Up in Arms (1944) works well enough, though Kaye became a more controlled--and more effective--entertainer in later films such read more

Journeys in Classic Film Posted by Kristen on Jan 7, 2013


Harry Belafonte and Danny Kaye are good fun as they sing this silly, but skillful rendition of Have Nagila on Kaye's show in the sixties. They had terrific chemistry--it would have been great to see them costar in a musical. Here's another light-hearted duet, the calypso read more


Here's Louis Armstrong and Danny Kaye singing When the Saints Go Marching In in The Five Pennies (1959). They play well off of each other, but I think Louis Armstrong can't help but dominate this scene with his blissed-out charisma. read more