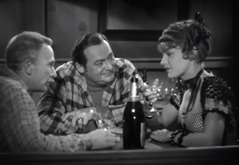 Come and Get It (1936) with Frances Farmer The Hawksian Archetype


Author Edna Ferber in both her plays and novels had a penchant for sprawling familial tales of Americana which were indubitably fortified by social issues. Come and Get It gives the initial impression of another Howard Hawks movie released the same year, Barbary Coast (1936). In fact, that’s read more Hometowns to Hollywood Posted by Annette Bochenek on Jun 24, 2015


“The more people pointed at me in scorn, the more stubborn I got. And when they began calling me the ‘Bad Girl of West Seattle High,’ I tried to live up to it.” -Frances Farmer When I relayed the complicated tale of Frances Farmer’s life to a friend of mine, his respo read more


Geena" Davis (born January 21, 1957) is an American actress, film producer, writer, former fashion model, and a women's Olympics archery team semi-finalist. She is known for her roles in The Fly, Beetlejuice, Thelma and Louise, and The Accidental Tourist, for which she won the 1988 Academy Award f read more