If there were an equation for the perfect Hollywood Male Star persona it would probably go a little something like this: ridiculou good looks + charm  ­+ debonair style  + self-deprecating humor + approachability – laughable machismo. To use an old cliché, the perfect Male Star must be someone “Men want to be and woman want to be with.” In terms of classic Hollywood, no star fit’s the bill more than Cary Grant.

Cary Grant’s appeal to mainstream audiences knew no bounds. He was as good-looking as Rudolph Valentino, as humorous as William Powell, as stylish as Fred Astaire and as approachable as Jimmy Stewart. His appeal was universal; men, women, children and anything in between all loved the man.  But why? What is it about Cary Grant that makes him so universally adored? Well, let’s go back to the equation, shall we. Not only was he handsome, charming, and oh-so debonair, but, most importantly, he knew he was all of these things and didn’t take it seriously. Look at his role, David, in Bringing Up Baby. 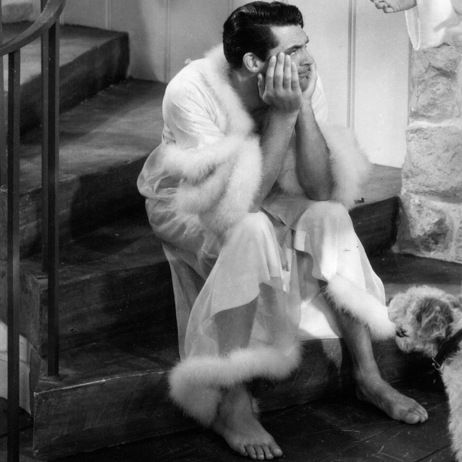 Cary Grant, being “gay all of a sudden” in Bringing Up Baby. (1938, Howard Hawks, director)

Grant could have played the character cool and calm; a suave, worldly scientist almost apathetic to the fact that he was about to complete a multi-million dollar project, sure to propel him forward in the world of paleontology. However, he didn’t. Instead, Grant did quite the opposite, creating a nervous, anxious, stuttering, geek of man, struggling to keep up with the unorthodox antics of Katharine Hepburn’s Susan. He was goofy; he was awkward; he was able to laugh at himself. And it was this self-deprecating humor that the audience loved.  Here is this great looking man with charm oozing from every pore, yet, here he is, willing to make a complete fool of himself.

And that is the appeal. The utter disregard for what is classically “manly” and “alpha,” in favor of humor and humility. Sure, Grant could (and did) play the alpha male as well as anyone else, but it’s the so-called “betas” that gained him universal appeal.

Cary Grant showing some legs with Ann Sheridan in I was a Male War Bride. (1949, Howard Hawks director)