“What’s Up, Doc? The Animation Art of Chuck Jones” Exhibit at The Museum of the Moving Image

“Kill the Wabbit, Kill the Wabbit”… Yes I still have that song in my head! Really! As a matter of fact, I sang the song all weekend long to anyone who would listen as I told them about my delightful visit to the Chuck Jones Exhibit at The Museum of the Movie Image. Did I say ‘delightful visit?’ Well, that would be an understatement…

That said, as you may suspect from my above musings, this Exhibit is just so wonderfully special that I am going to find it difficult to convey its scope here in this very limited space… So, the best I can do right now is provide a sampling of its many treasures  — and urge you to visit the Chuck Jones Exhibit either at The Museum of the Moving Image in NYC (through January 19, 2015) — or when the Exhibit travels through a city near you next year…

So, here goes… a whirlwind online ‘tour’ via a smattering of photos taken at the Exhibit…

All photos taken by me, courtesy of the Chuck Jones Center for Creativity, the Museum of the Moving Image and/or Warner Bros.™ Looney Tunes Characters (© & TM Warner Bros.) 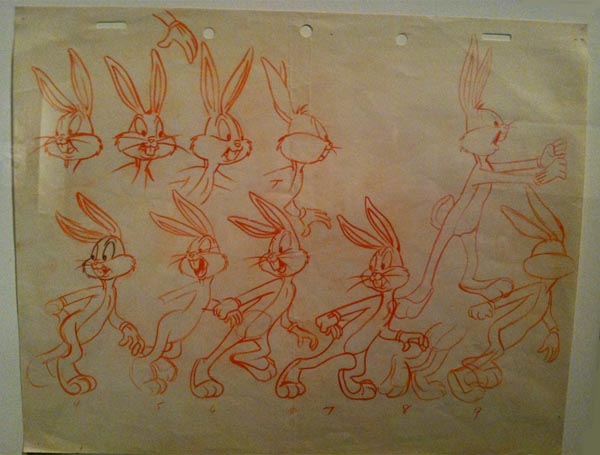 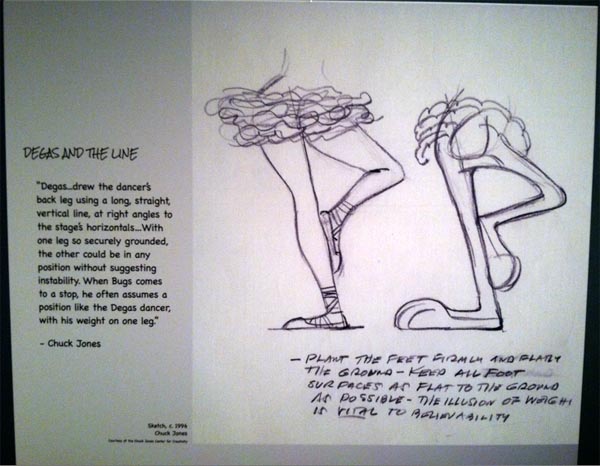 A thorough knowledge of anatomy is crucial in animation because even an imaginary character has to move in a consistent manner and display a real sense of weight and physical presence. To quote Chuck Jones: each character “has an individual style of movement and of thinking, all subject to the restrictions of their own skeletal structures.” 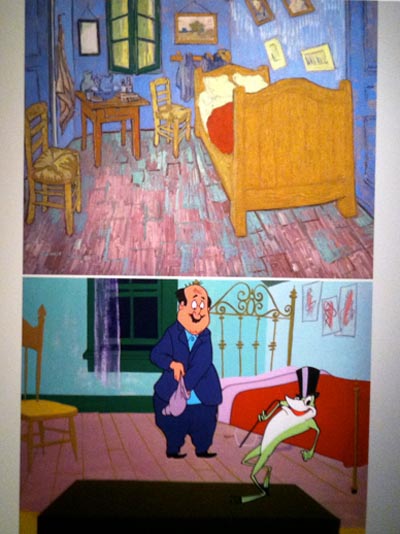 In “One Froggy Evening” (1956), Chuck Jones created the construction worker’s bedroom to evoke Vincent Van Gogh’s painting, The Bedroom (1888). Jones often integrated fine art references into his cartoons. “One Froggy Evening” was inducted into The National Film Registry in 2003. 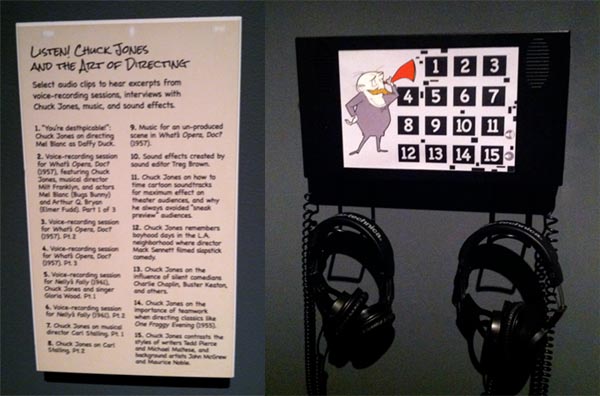 A wonderful array of audio clips from voice over sessions featuring Mel Blanc as Bugs Bunny and Daffy Duck, and Arthur Q. Bryan as Elmer Fudd — complete with music and sound effects — plus marvelous interview clips with Chuck Jones. 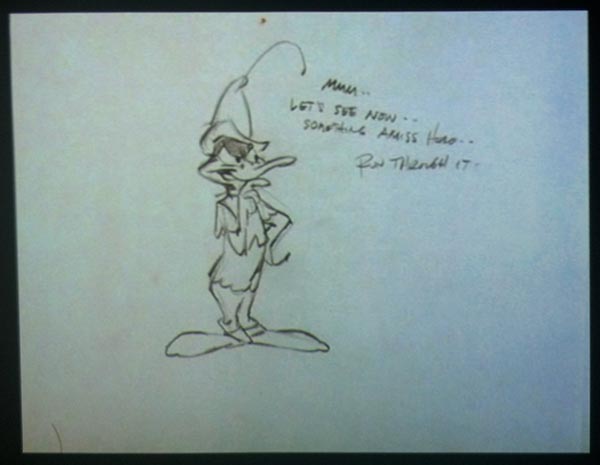 Screen grabs from “From Pencil to Paint,” a short film that explores Chuck Jones’ animation process 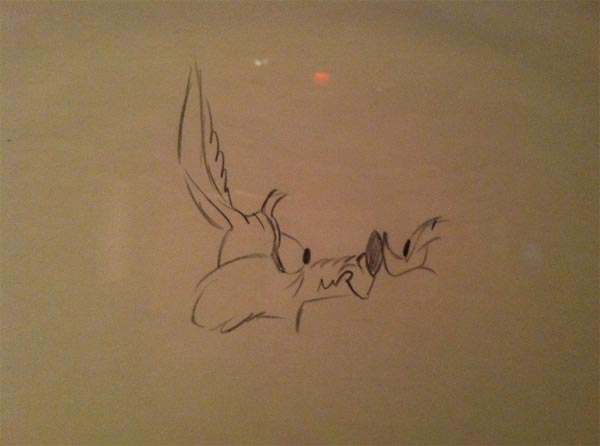 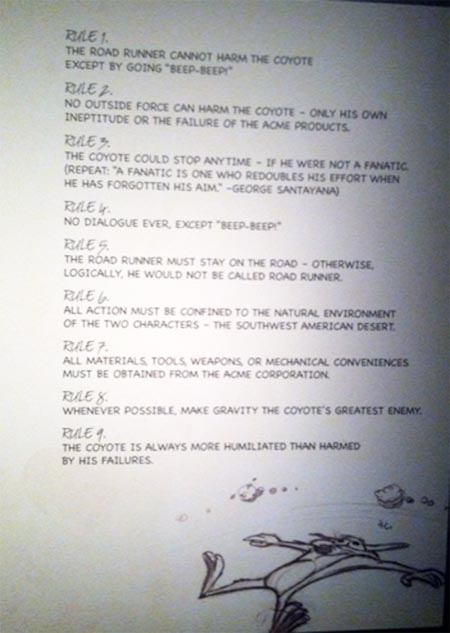 Chuck Jones worked within a clearly defined set of rules for each of his cartoons (as seen above for The Road Runner) to ensure that each of his characters had distinct personalities and behavioral traits. 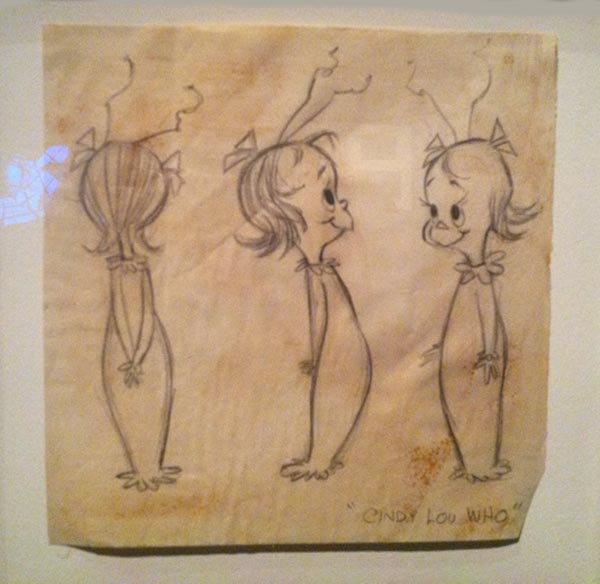 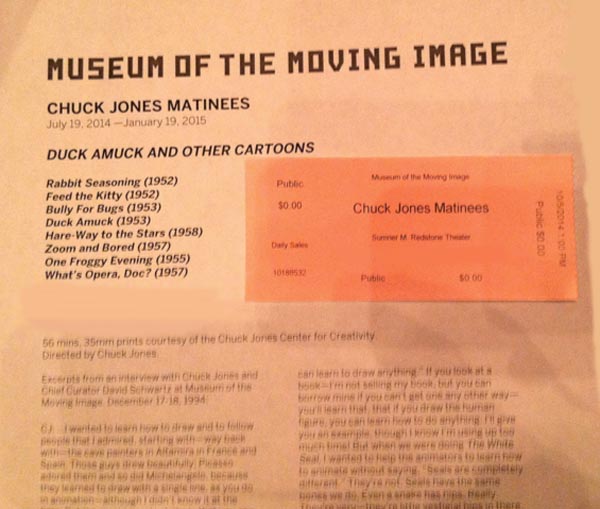 As mentioned above, these photos represent just a small sampling of what you can see and learn at the Chuck Jones Exhibit. The collection also covers other iconic characters including Porky Pig, Pepe le Pew and Marvin Martian, as well as The Grinch and Horton (Hears a Who). There are music scores, production notes and looped cartoons, plus information on Chuck Jones’ artistry, inspirations and influences. And if that’s not enough, you can learn lots of fun facts as you progress through the Exhibit, such as the perfect number of frames to ensure a laugh when Wile E. Coyote falls off a cliff, and how the cartoon “Feed the Kitty” (1952, starring Kitty and Marc Antony) inspired a scene in Disney’s Monsters Inc (2001).

All told, the Chuck Jones Exhibit is well worth the time (understatement). And, it’s only part of what The Museum of the Moving Image has to offer — there’s also a marvelous “Behind the Screen” Exhibit that features historic movie/TV cameras and equipment, classic movie/TV costumes and collectables, classic serial screenings, computer-based interactive experiences and more — but more about that another time…

“What’s Up, Doc? The Animation Art of Chuck Jones” is a traveling exhibition that reveals the creative genius behind some of the most enduringly popular cartoons and animated films of all time. The exhibition is a partnership between the Smithsonian Institution Traveling Exhibition Service, The Academy of Motion Picture Arts and Sciences, the Chuck Jones Center for Creativity, and the Museum of the Moving Image.

“What’s Up, Doc: The Animation Art of Chuck Jones” at Museum of the Moving Image is the first stop in a national tour organized by the Smithsonian Institution Traveling Exhibition Service.

3 Responses to “What’s Up, Doc? The Animation Art of Chuck Jones” Exhibit at The Museum of the Moving Image