What a Character! Blogathon: Erik Rhodes and Alan Hale

I am so excited to be participating in my very first Blogathon! And what makes this even more special for me, is that this Blogathon celebrates Character Actors — those abundantly delightful ‘support’ players who add so much ‘character’ (forgive the pun) to the classics! It was really tough for me to decide who to cover (there are so many great ones) — but I finally settled on two very different, but equally wonderful actors: Erik Rhodes and Alan Hale. It’s funny, even as I’m typing this post, I can’t help but hear Erik Rhodes declaring “For the woman, the kiss. For the man, the sword!” and Alan Hale singing “My tonsils won’t burn” but more about that later…

Oh and before I officially start this post — Many Thanks to @IrishJayHawk66 (Blog Outspoken and Freckled), @Paula_Guthat (Blog: Paula’s Cinema Club) and @CitizenScreen (Blog: Once Upon A Screen) for brainstorming and hosting this event! Please visit their blogs for more posts and info about this Blogathon.

Erik Rhodes is one of my all-time favorite Character Actors, yet oddly enough, I haven’t seen him in all that many movies. It just so happens though, that in the few movies I’ve seen him in, he’s unforgettable – a real scene stealer!  I ‘stumbled upon’ Rhodes simply because I’m a huge Fred Astaire and Ginger Rogers fan, and he ‘just happens to be’ in two of their movies, The Gay Divorcee and Top Hat — playing the well-meaning ‘professional’ co-respondent Rodolfo Tonetti and the wonderfully sincere dress-designer Alberto Beddini, respectively.

Upon seeing Rhodes in those two Astaire/Rogers movies, I immediately thought to myself ‘what a fabulous Italian actor!’ Little did I know at that time that Rhodes was NOT Italian; in fact he was born and raised in good old Oklahoma, USA!

Rhodes was born in El Reno, Oklahoma Territory in 1906. He graduated from the University of Oklahoma, won a scholarship to study acting in New York, and landed his first Broadway role, although a mere eight lines, in A Most Immoral Lady (1928). Rhodes, an accomplished baritone, was then cast in a few Broadway musicals: The Little Show (1929), Hey Nonny Nonny! (1932), and — Gay Divorce (1932) starring Fred Astaire. His memorable performance as the high-spirited Italian, Rodolfo Tonetti, impressed RKO Execs and he was cast in the 1934 film, The Gay Divorcee, starring Fred Astaire and Ginger Rogers.

(Note: sorry, although the below quotes are from their respective movies, they do not necessary reflect the images surrounding them) 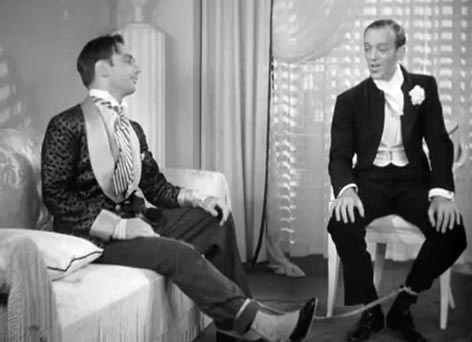 “Chance is the foolish name for fate.” 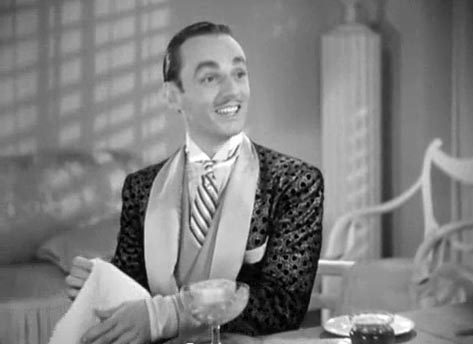 “Rodolfo Tonetti at your service.” 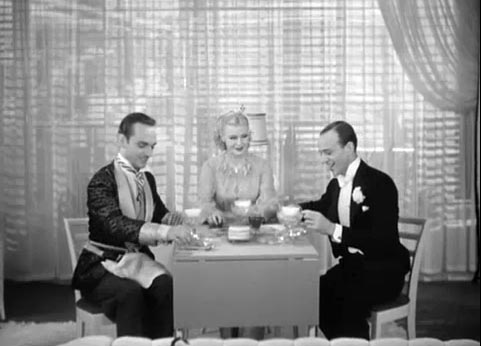 “You’re wife is save with Tonetti. He prefers spaghetti!” 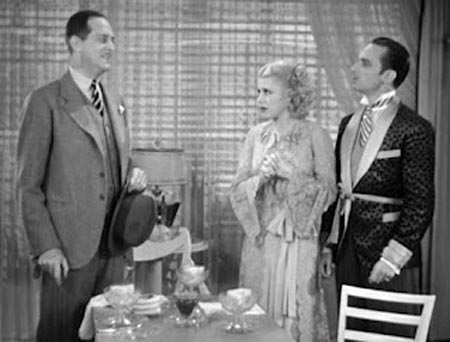 “Bene, whichever way the wind she is blowing, that is the way I sail.” 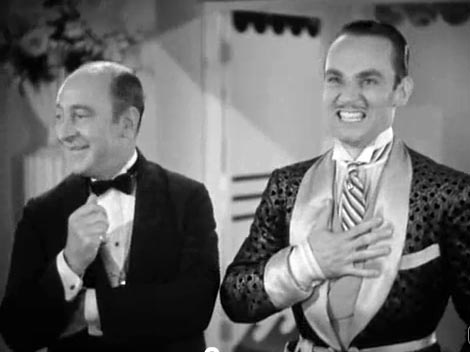 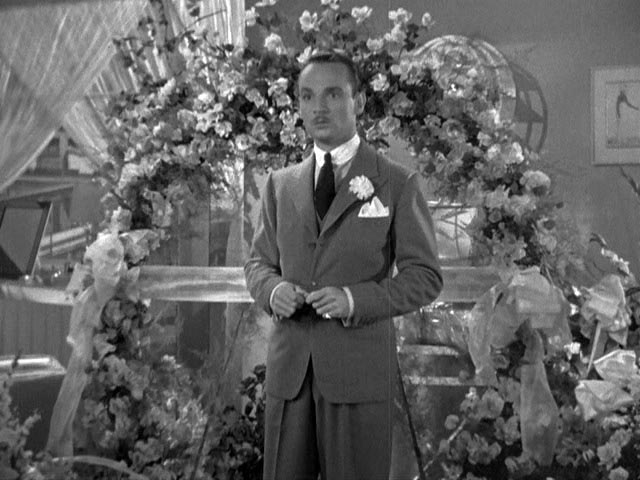 “Who is sending you this horse’s shoe?” 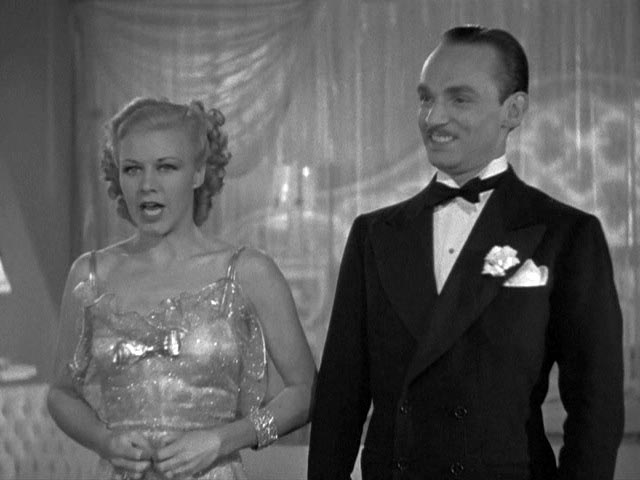 “I promised my dresses that I would take them to Venice and that you would be in them!” 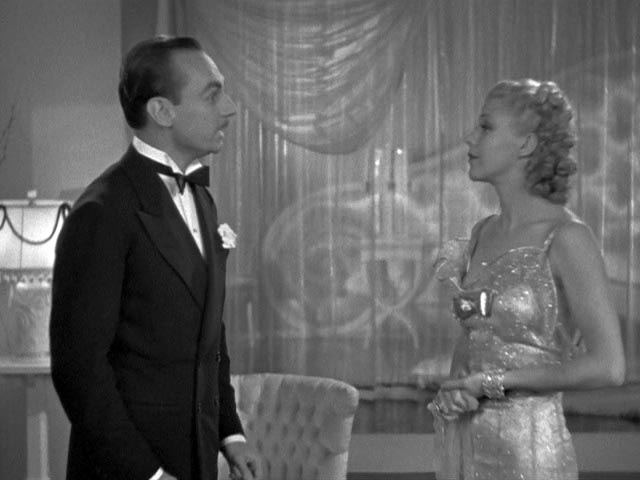 “Never again will I allow WOMEN to wear my dresses!” 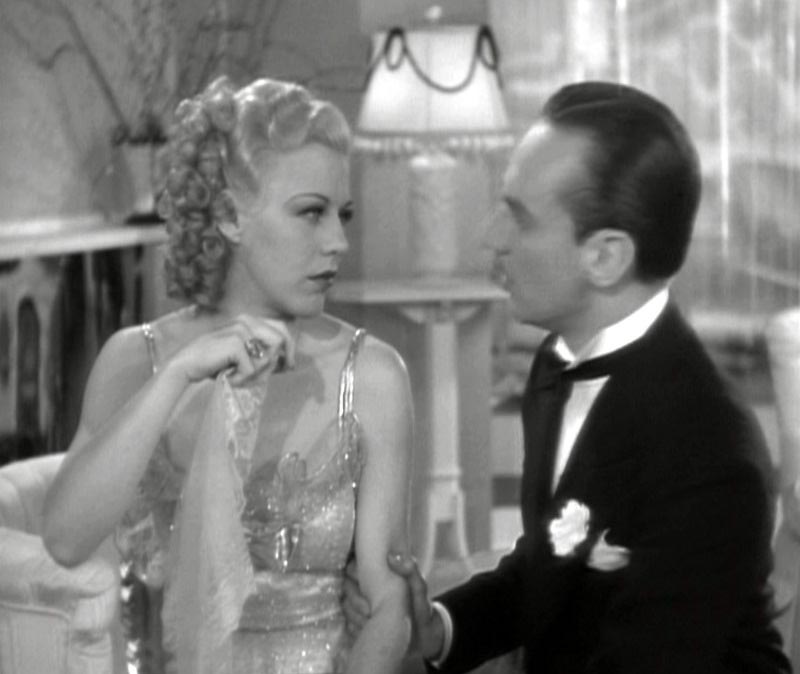 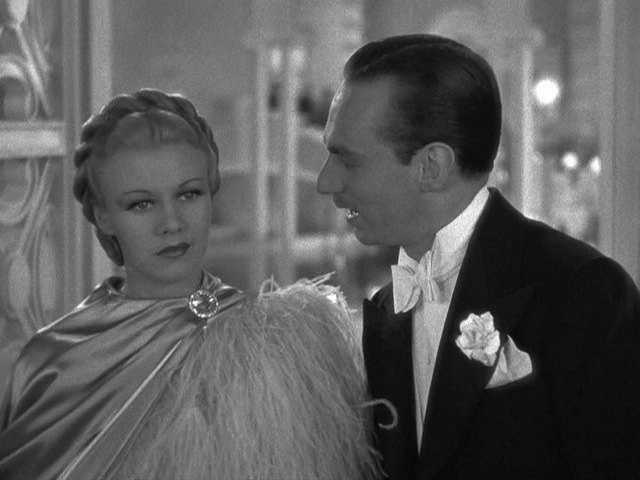 “Poverina, Beddinni does not like to see you so sad.” 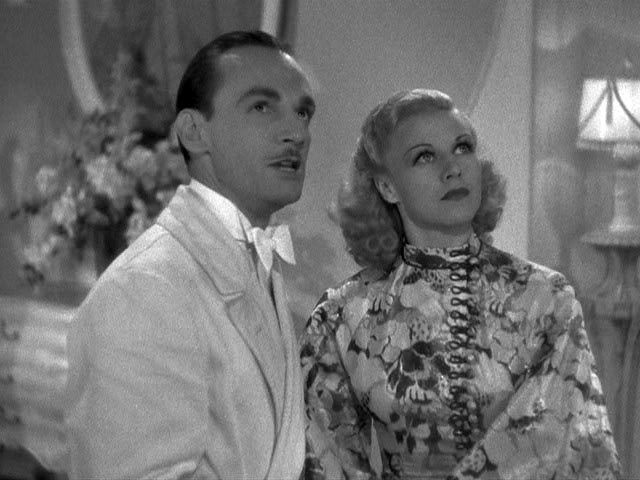 “For the woman, the kiss. For the man, the sword!”

Although most fans (me included) probably remember Erik Rhodes best as those passionate Italians — Tonetti and Beddini — he was expert in dialects and accents overall, and could convincingly play non-Italian roles as well. As a matter of fact, I could hardly believe my ears when I first heard him speak ‘straight English’ as David Scott-Frensham in Mysterious Mr. Moto (1938) and as Max Corday in Charlie Chan in Paris (1935). 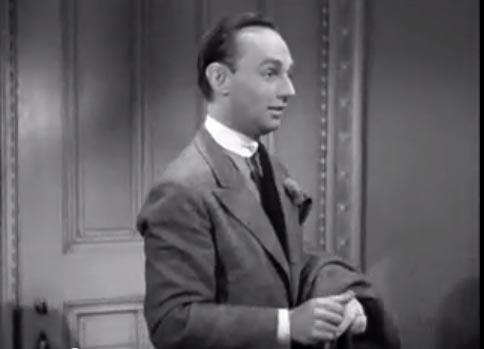 Rhodes continued to act on Screen, TV and Broadway through the late 60s (with an additional isolated TV appearance in 1976, The Adams Chronicles). Most notably however, he appeared in some solid Broadway runs during the 50s and 60s: Can-Can, A Funny Thing Happened on the Way to the Forum and Barefoot in the Park.

And now for something completely different…

Alan Hale: Pirates, Cowboys and Much More!
(potato chips anyone?)

Where do I even begin? Alan Hale is just such a wonderful character actor. He’s had quite an impressive career to boot, appearing in over 230 films, silent and sound, (and directed nine more), for a career spanning 40 years. I essentially ‘discovered’ Hale as I watched my favorite Errol Flynn movies — from The Adventures of Robin Hood to The Sea Hawk to Dodge City to Santa Fe Trail and more. But I must say, that perhaps my favorite Hale role is (and it is a SMALL role to say the least) Danker in It Happened One Night – that tinny tiny little scene always has me laughing out loud (what a booming voice!). 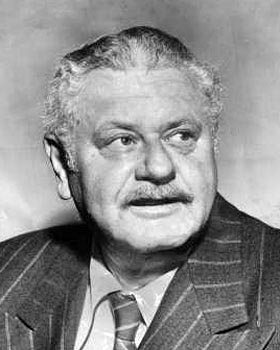 Alan Hale was born in 1892 in our capital city, Washington DC. He studied opera, but was unable to make a career out of it, so he pursued acting instead. He started out in silents and worked his way through sound — becoming a popular and very busy character actor in the process.  He’s probably best known for his role as Little John in both the 1922 (silent) and 1938 (sound) versions of Robin Hood.

Of course, just about everyone knows that he’s also The Skipper’s father (Alan Hale Jr. played The Skipper in Gilligan’s Island), but I’m thinking that not too many people know that he was also an inventor — and is credited with inventing, holding the patent to, and/or financing the creation of auto brakes, hand-held fire extinguishers, greaseless potato chips — and the folding theater seat! 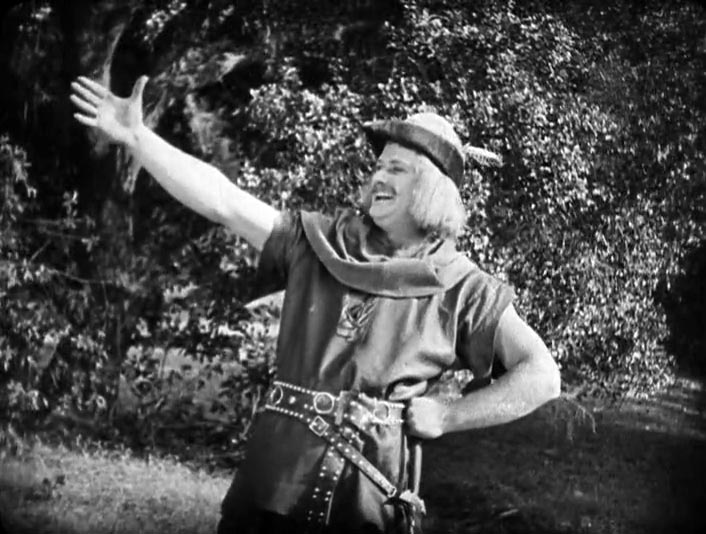 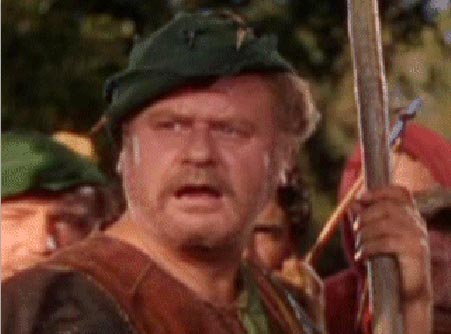 Robin Hood: Give way, little man.
Little John: Only to a better man than meself.
Robin Hood: He stands before you. 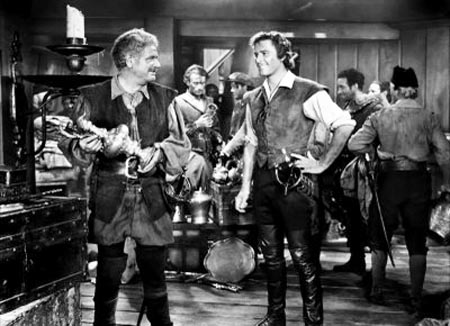 “To England, and the Queen!” – as Carl Pitt in The Sea Hawk, starring Errol Flynn  (director, Michael Curtiz 1940) 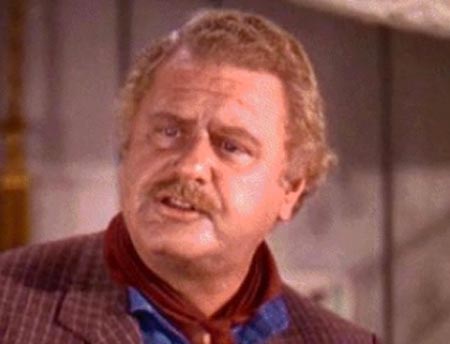 “He’s the most ‘movin’ on’ man you ever saw. First off, he was in the English army over in India. Then he got mixed up in some kind of a hu-rah Revolution down in Cuba way. Then he started punchin’ cattle in Texas, that is, of course, before he enlisted in the war. So, you see, he’s either the greatest traveler ever lived, or else he is the biggest lier!”
– as Rusty Hart in Dodge City, starring Errol Flynn
(director Michael Curtiz, 1939 ) 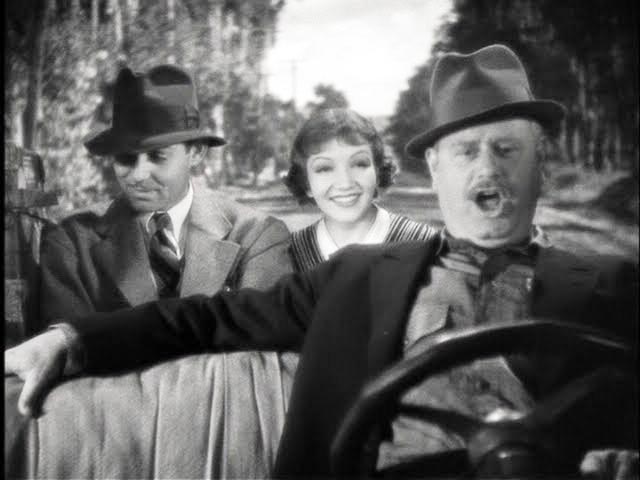 Thanks again to @IrishJayHawk66, @Paula_Guthat and @CitizenScreen for running this fabulously fun Blogathon! I hope you enjoyed this post AND I hope you get a chance to enjoy ALL of the other blogger’s posts in this Blogathon!

13 Responses to What a Character! Blogathon: Erik Rhodes and Alan Hale