The MGM Blogathon – All Aboard The Band Wagon

All Aboard The Band Wagon

Nothing in this world fills me with more unadulterated joy than a well made musical. Every since I was a wee-little lady I wanted nothing more than to live in a Technicolor world – where everyone’s problems could be confronted and resolved with a concise song and dance number. I mean, wouldn’t that be perfect? Imagine, instead of having an awkward, drawn out conversation about how you may or may not feel, you simply begin to tap your feet and let the world of music and dance glide you through your troubles. Musicals take the best that real life has to offer and spin it into a whole new perspective outside of the bounds of reality. Whether demonstrating serious emotional engagements between characters or telling a story about a private detective chasing a femme fatale, musicals take the everyday aspects of life and transform it into magical fantasy; a feast for the eyes and the ears. And, in my opinion, few musicals accomplish his better than MGM’s 1953 musical The Band Wagon. 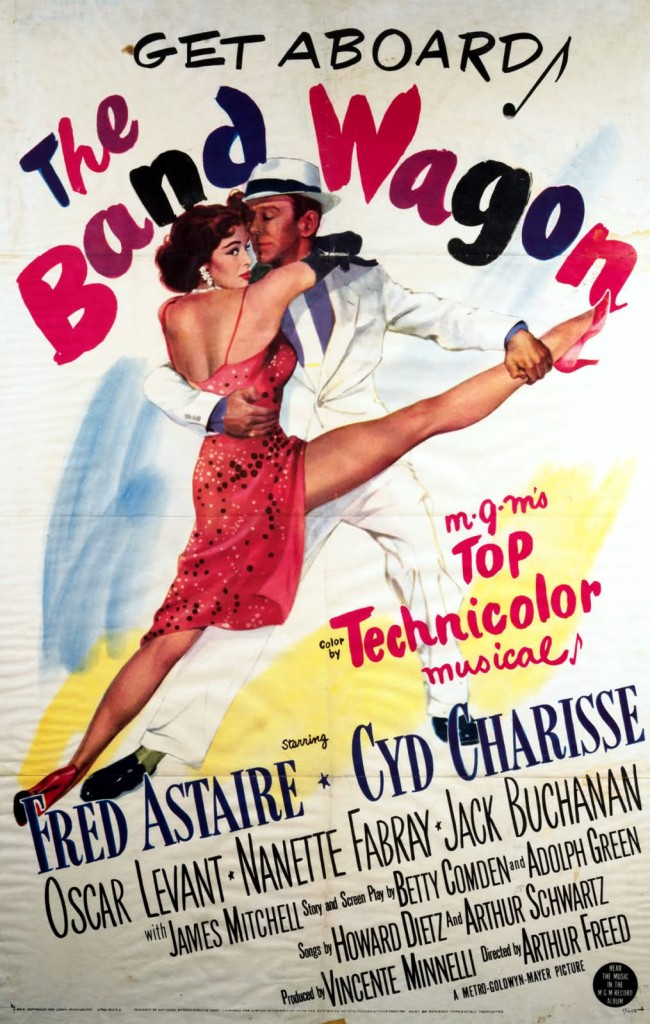 The Band Wagon is one of those cheeky, art-imitating-life situations everyone in Hollywood loves so much. In the film, Fred Astaire plays former-Broadway-hotshot-turned-Hollywood-leading-man, Tony Hunter, who now finds his star is diminishing after his many years in Tinsel Town. Sound familiar? Well, it should because in 1953 that was the basic summary of Astaire’s real-life career. But, rather than become angry at the thought of lampooning his own image, as screen writers Betty Comden and Adolph Green feared he would be, Astaire found the part excellently written and was happy to play a good-natured caricature of himself. Reality kept creeping into the script with Comden and Green even inserting parodied versions of themselves in the film as the squabbling playwrights Lester and Lily Marton, excellently played by Oscar Levant and Nanette Fabray. Now, despite the film’s ‘art-imitating-life’ writing and casting decisions, the film is still a musical and the best part of musicals is the fact that they aren’t realistic. As I mentioned earlier, they are fantasy: Technicolor, sequin-laced, sparking gems of fantasy. And with that in mind I want to talk about my two favorite fantastical elements of the film, the song and dance numbers Dancing in the Dark and Girl Hunt.

One of the most interesting aspects of the Arthur Freed produced musical on the MGM lot was how perfectly they blended the emotional realism of the integrated musical with disconnected spectacle of the backstage musical. From Easter Parade to Singin’ in the Rain and beyond, the Freed unit had a talent for seamlessly mixing ‘inner-world’ emotional content with the ‘outer-world’ of the staged production. In The Band Wagon, the most emotional, integrated number is the famed Dancing in the Dark. 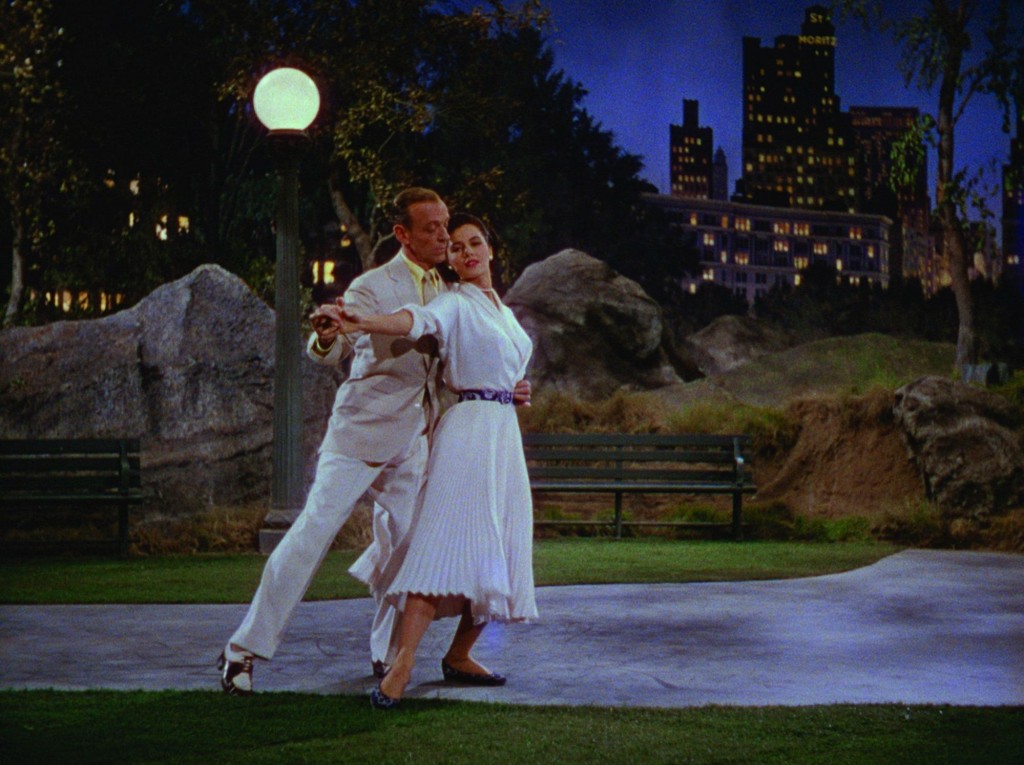 For being called Dancing in the Dark, it really doesn’t look all that dark.

The scene itself is simple: The two leads that have been butting heads the entire time decide to take a walk in Central Park and get to know one another. They talk, of course, and seem to settle their differences. But as the old saying goes, talk is cheap and their real understanding comes when the talking is over and the dancing begins. Dancing in the Dark, in my opinion, is one of the most elegant dances in all of cinematic history. Although Fred Astaire is his usual graceful self, the real star of this number is Cyd Charisse.

With a background in Russian Ballet, Charisse’s grace and skill as a dancer were almost unmatched in Hollywood. At the start of number, it is not Astaire’s face we see, but hers. We, as the audience, are put in the position of Astaire, watching her, almost passively, as they swoon and sway around one another. When he approaches her, attempting to get closer, his hands remain clasped neatly behind his back, indicating that she is the one in control. Even when he breaks form, going for the embrace, he never does so without permission. Their initial touches are gentle and light. Astaire may hold her hand but he is not holding her, acting merely as an accessory to her own dance moves more than anything else. The only truly embrace when Charisse extends her hand, offering Astaire friendship, courtship, and perhaps something a little more. As the dance continues, she falls deeper in his arms, accepting not only his dancing support but his emotional support as well. By the end of the song, an understanding has occurred and Astaire no longer fears touching her, in fact, it is quite the opposite as he envelops her waist, allowing her to willfully sink into his arms. And for the rest of number, as Charisse twists, turns and plies her way through Central Park, Astaire remains her pillar of support. When the dance is done and the two are holding hands in a New York City horse-drawn carriage, it is clear that the pair have fallen in love. While Dancing in the Dark provides us with the seamless integration of love and dance, The Girl Hunt gives the audiences some good old fashion cinema of attractions.

I want to go to there.

The Girl Hunt is quite possibly my favorite musical number ever filmed. I mean, how could it not be when it features three of my favorite things: Technicolor, film-noir, and musicals. In the film the sequence acts as a choreographed musical number within the film itself, performed on stage before a live studio audience: the backstage musical at its best. And because the number exists only on a stage within the world and not in the reality of the world itself, the number is basically in its own isolated world where anything is possible.

The Girl Hunt parodies the great film noir pictures of the day, particularly those of the Mickey Spillane variety, with Astaire playing the rough and tumble private detective, Rod Riley. The number opens like any respectful film noir, with a voice-over, a cityscape and a damsel in distress all dressed in white. While said damsel (played by Charisse) is twirling herself into Astaire’s arms, an unknown assailant is blown to pieces in a mysterious explosion, leaving nothing behind but a hank of hair, a rag and a bone. Like any private dick worth his dollar, Astaire immediately knows that the cheetah print rag is from a high price, high fashion boutique. Here he finds more thugs, more danger and a femme fatale, all dressed in black who just also happens to be played by Cyd Charisse. This is where the power of the backstage musical truly arises.

For love of your preferred deity, some one please buy me one of those antlered mannequins.

The set, which would never truly fit on a theatre stage, is a sight to behold. Walls of royal purple fill the screen while marble mannequins adorned in sequin antlers hang from the walls. Is it realistic looking? No, but that’s the point. This number is a spectacle and meant to be looked at, not analyzed through a realist lens. And when you think about it, nothing in this number really makes that much sense at all. Are the two Charisse’s the same woman? What’s going on with that emerald ring? Where do the thugs keep coming from? None of these question are ever really answered, but you know what? It doesn’t matter because everything on the screen is so beautiful, so entertaining and such a spectacle that all of the plot holes and inconsistencies pale in comparison to the well decorated, well choreographed, and well directed piece of art.  From the first glimpse of the abstracted New York City skyline to the Technicolor delight of the club scene, everything is the A-plus, non-stop spectacle that Minnelli and MGM studios aimed to show their audiences. To put it simply and to quote the The Band Wagon itself “That’s entertainment.”

A big Thank You to Silver Scenes for hosting this fun MGM Blogathon event! There are so many more wonderful Classic Bloggers participating in this event so please be sure to check out the other entries.

12 Responses to The MGM Blogathon – All Aboard The Band Wagon