When I set out to research Scarface (1932) in the Academy’s Production Code Administration (PCA) files, I was met with an overwhelming amount of material; so much so that it took me five Tuesday evenings to conquer all 356 pages of this file, by far the heftiest I’ve ever encountered. As I was soon to find out, there were plenty of reasons Scarface amassed such an enormous PCA record.

From the start, the Studio Relations Committee (SRC) branded Scarface dangerous, conjecturing the dire consequences its release would bring about for Hollywood; after the likes of Little Caesar (1931) and The Public Enemy (1931), talk abounded of state censor boards considering banning all gangster films. Without a doubt, Scarface’s sheer amount of violent sequences, Tony’s (Paul Muni) ascent to gangland supremacy and swift fall, and his incestuous longings for his sister Cesca (Ann Dvorak) all astound and disturb, even by pre-Code standards.

Shooting an immobile man in a hospital bed? That’s not too low for Tony to stoop.

That said, it’s not surprising that Scarface had a rocky censorship history. Tycoon producer Howard Hughes, working alongside strong-willed director Howard Hawks, did his fair share to fan the flames and infuriate the SRC along the way. As an independent producer, Hughes, through his studio The Caddo Company, had a substantial amount of his money tied up in Scarface. Initially, he fought tooth and nail to push the envelope, most likely sensationalizing the story as much as possible to attract audiences—but the war didn’t end there, for he also had to make concessions when it became apparent that the film’s salaciousness could create impediments for distribution.

Hughes’ censorship battle, while tremendously stirring and amusing to read about, is already well-documented. But while perusing Scarface’s PCA file, I stumbled upon a striking and timely idea contained in several pieces of correspondence that posited Scarface as propaganda for gun control in an effort to earn censor approval. Yes, you read that right. Though ultimately the strong push for this positioning waned, I found the whole idea quite intriguing. For your reading pleasure, below is an overview of the exchanges and history of this short-lived approach to market Scarface as an anti-gun picture.

It would take a lot of editing to rid Scarface of its ever-present firearms. They were even used to kill time.

Upon viewing rushes in August 1931, the SRC’s Jason Joy cautioned that Scarface could probably only screen in half of US theaters unless “radical revisions” were made; he surmised stringent censor boards would most likely reject the picture due to its content and theme. After viewing a cut of the film the following month, which confirmed the office’s censorship fears, Joy met with Hawks and the Caddo Company’s E.B. Derr to discuss an idea to position Scarface as an anti-gangster movie. Hawks supported the concept and affirmed he would “sell” it to Hughes, who warily approved the edits that would be made for the sake of this new concept.

As the SRC’s Lamar Trotti summed up the argument after a discussion that month: “The Gangster is a great man as long as he has a gun; once without a gun, he is a yellow rate. The final message of the picture will be – not to let criminals get possession of guns.” Clearly, something drastic would have to be done to turn Scarface around. Awkward insertions proposed by the SRC to achieve such a point included mid-picture speeches from a Citizen’s Committee group and the Chief of Detectives (Edwin Maxwell) planted to emphasize law and order and decry gangsters’ spinelessness, in addition to an altered finale in which Tony turns “yellow” and gets arrested. Another suggestion was to add a foreword by Police Commissioner E. P. Mulrooney, a draft of which proclaimed: “No one is safe until this monster is stripped of the means by which he prolongs his menace – The Gun.”

You guessed it: This is the Citizen’s Committee group.

But these additions still didn’t suffice. So, in November 1931, a jury consisting of Motion Picture Producers Distributors of America (MPPDA) Board of Director members were summoned to review Scarface. All three jurors deemed the situation perilous, with Robert Cochran reiterating: “We have got to make this picture propaganda enough against firearms to save it. The way it is, it is impossible.”

At this point, it seems that Hughes and company, who were well aware of the difficulties this tale would bring from the very beginning, grew worried that the film would not pass censor boards and became anxious for the SRC to help them “save it.” From there, the SRC took a third stab at taming the picture to emphasize the anti-gun perspective, make Tony less sympathetic, and add a finale in which Tony goes to trial and receives a death sentence, thus sending a message that guns provide Tony with his strength and are too easily obtained by hoodlums. 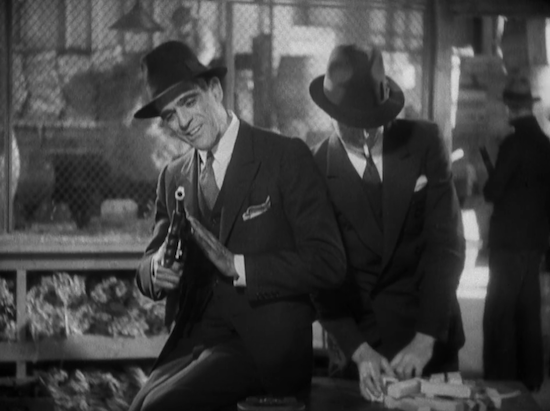 The aforementioned tribulations were initiated by the SRC with Hughes’ approval to positively market the picture and help it pass censor boards. But were those results accomplished? Well, not exactly as intended. After months of negotiations over the above edits and a lengthy battle fought over the title during late 1931-early 1932, Hughes grew restless and complained about the amount of time the SRC took to approve the picture. Being a rebel, the producer went ahead and released the uncensored version to the press and select states in which no censor boards existed. This dicey move resulted in mountains of positive critiques “praising it to the skies,” according to the tycoon—and a thoroughly incensed SRC, as the organization expressly stated he could not play that cut. In a majestically melodramatic press release, Hughes, most likely brimming with cocky confidence from the film’s encouraging reception, professed his intent to show the picture in its original version and avowed “there will be no compromise with the censors.” It seems that after so much capitulating to the SRC, Hughes’ about-face won him the game, in his mind: He had press members, audiences, and leading crime and legal authorities’ commendation on the original version of Scarface, so why buckle to the SRC and send out anything other than that cut now?

After the opening credits, this is the first thing that appears onscreen—at least, for viewers today. I’m not sure if this is a remnant of the original prologue or a later one.

As far as censor boards go, the reaction was mixed. Scarface passed without changes in select territories (Virginia, Ohio, Kansas), was outright rejected in others (Chicago and New York, though New York was overturned), required edits in select locations (Pennsylvania), and curiously, was issued a permit that was later overturned (Maryland). For the most part, it seems that the stringent anti-gun push, while fascinating to read about today, was unnecessary, as Scarface eventually screened in most locations with fewer cuts than the SRC initially labored over—with the help of Howard Hughes, of course.

I don’t think any anti-gun or anti-gangster angle could save this maniacal man.

The ultimate irony is that Scarface seemingly generated the opposite effect: Upon learning about all the money the picture was pulling in, producer Jesse Lasky Jr. called up the SRC to inquire about his next project, which he naturally wanted to be a gangster film.

*Ironically, Mulrooney would later go on to declare that he didn’t want to be associated with a corrupt picture in which the gangster gets everything he wants. Furthermore, he felt no cuts could fix the situation, and he didn’t believe the film could even adequately present a message condemning the easy sale of guns… because Tony is never pictured buying his.