Pre-Code Corner: A Look at the Atlanta Better Films Committee

A Look at the Atlanta Better Films Committee

I spend many a Tuesday evening buried in the Motion Picture Association of America Production Code Administration (PCA) records housed at the Academy’s Margaret Herrick Library in Beverly Hills. My first exposure to these gems took place in 2007 when I visited the library to research for my senior thesis on Baby Face (1933). Since then, I’ve flipped through at least 100 files, both digitally and on paper, and I’ve become familiar with the types of correspondence and documentation most records contain. One item I’m always thrilled to stumble upon is a Reviewer’s Report from the Atlanta Better Films Committee because 80% of the entries include pointed, irate, and occasionally over-the-top comments that I happen to find very humorous. 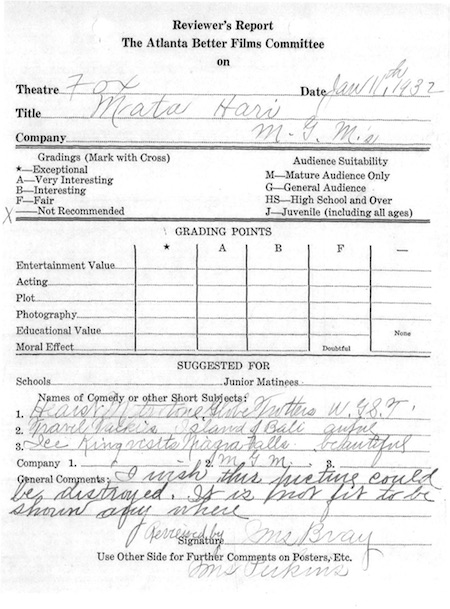 Exhibit A: A Reviewer’s Report from the Atlanta Better Films Committee for the 1932 film Mata Hari. Enjoy!

Though Better Films committees were formed in countless cities, for the most part, I only spot Atlanta reports in the PCA files. Curious, I started to investigate the group’s history, which mirrors the efforts of other self-censoring entities during the pre-Code era. The National Committee on Better Films spun off the National Board of Review of Motion Pictures, which was established in 1909 to promote voluntary picture regulation. The idea of the new association was to work jointly with theater owners and request “finer pictures” from exhibitors to ward off calls for state censorship and “build” audiences up for more quality entertainment, which the boards would throw their full support behind. 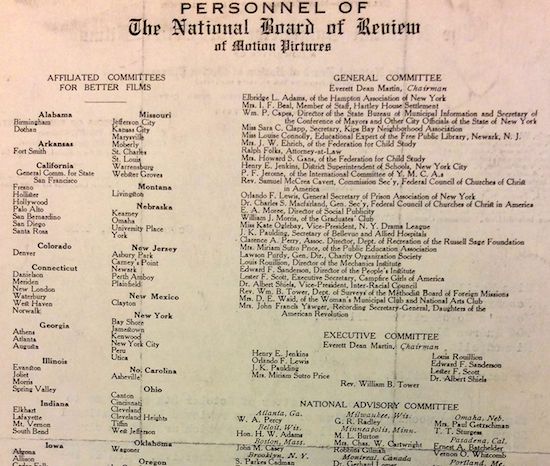 If you squint, you can make out the city of Atlanta representing as an affiliated Better Films Committee.

Realizing the potential collective power their members held, the National Board dispatched supporters to advocate for local Better Films committees across the country; in Georgia, the campaigner was “educational expert” and religious educator Louise Connolly. Despite the fact that she found it difficult to get the word out in the early 1920s (for one, ministers were apprehensive of her connection with the movie industry), by 1923 the Atlanta Women’s Club embraced the idea of Better Films boards. From there, the seed was planted and sprouting quickly; the following year, Atlanta Better Films Committee President Mrs. Alonzo Richardson declared that “selection and cooperation,” not censorship, “will solve the problems of the industry.”

As history would show, that attitude struggled in effectiveness – for the National Board, Better Films organizations, and the Studio Relations Committee (SRC) in Hollywood. As for the Atlanta body, even though they denounced censorship, the group indeed tried to repress at least one picture. In 1929, members attempted to bar The Very Idea from screening at the Rialto, but the theater owner fought back; in fact, he filed an injunction to ensure there would be no interference with the booking. (The film was already approved by the National Board of Review, which had basically become a censor authority, and they refused to withdraw their consent when the Atlanta board pushed for it, as the latter acted more as an advisory arm.) Not only did Atlanta’s attempt fail, but it actually inspired the opposite effect: As reported by The Film Daily, “the attendant newspaper notoriety proved a box-office boost for the film which played to such good business that it is being held over for another week.” 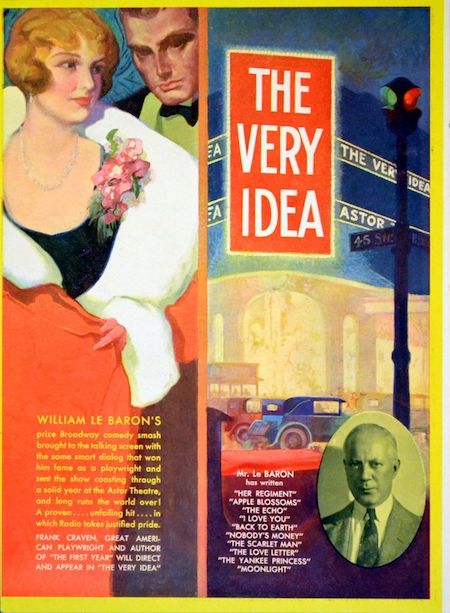 If you look up The Very Idea on IMDb, you’ll get an idea as to why the Atlanta Better Films Committee wanted this one stopped.

The Very Idea episode reveals several similarities between a group like the Atlanta Better Films Committee and the SRC. From 1930-1934, the latter was basically a consultative organization with no real authority to demand changes, very much like the Atlanta association. Additionally, the SRC, along with select critics and religious/social organizations, also lamented how publicity and infamy from questionable content could entice viewers to see what all the hubbub was about, which is exactly the scenario the Atlanta Better Films Committee caused. For instance, critic Mae Tinee reported on Baby Face: “If, after all these years, producers are to make pictures like Baby Face because pictures like Baby Face are what the public demands, then I throw up my hands. [Now I suppose you’ll all go and take a look at the film and thus encourage the industry to turn out some more like it].”

Calls for cleaner entertainment certainly didn’t produce it, especially during the pre-Code era, and neither the Better Films committees nor the SRC could do anything about it. When it became clear that the fight for higher quality pictures wasn’t panning out and boycotts loomed in the horizon in 1934, the hammer finally slammed down. With that, adherence to the Production Code became mandatory in the summer of 1934, as the industry feared any notion of federal censorship that could result from the pressure placed upon them by outside moral groups. And that is what finally tidied up the picture business – at least, for the most part.

With that brief historical overview, below are some choice comments and impressions from the Atlanta Better Films Committee, along with select overview of the grading points, which, as the first image in this article demonstrates, consisted of: * (exceptional), A (very interesting), B (interesting), F (fair) and —- (not recommended), as well as a chart of areas to grade: entertainment value, acting, plot, photography, educational value, and moral effect. To be honest, I’m not sure exactly how some of these remarks help advocate for better pictures, as many of these reports seem to serve as an outlet for members to voice their dissatisfaction with the era’s entertainment offerings. But hey, they are amusing, nonetheless. 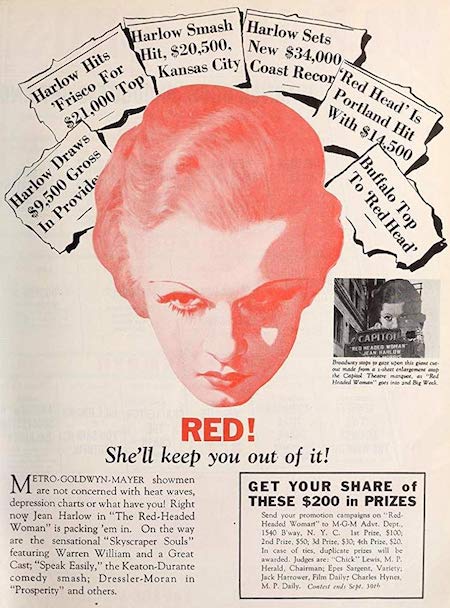 Red-Headed Woman (1932)
Not surprisingly, this picture was not recommended. In fact, the reviewer didn’t even bother to fill the grading chart out. At all. The only item marked was “not recommended.” Oh, and the general comments section is a gem: “I can’t imagine [sic] a writer with a mind so low as to write a play of this kind, much less one who would produce it on the screen. It’s disgusting. I think every American should be ashamed of the company that produced Red Headed Woman.”

Shanghai Express (1932)
Curiously, Shanghai Express was marked as “not recommended” with “bad” scripted in by “moral effect”; yet, the film received marks of A across the board – save for the aforementioned negative ethical influence. The general comments were certainly conflicted: “A picture of educational value” that seemingly was spoiled for the reviewer by “an immoral love story that is not true to life.” 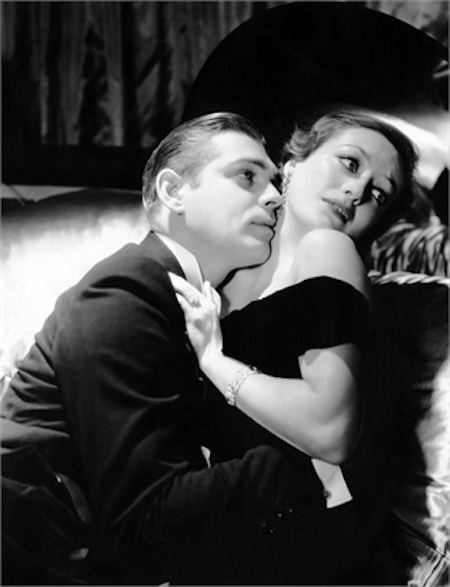 These two (Clark Gable and Joan Crawford) look like they are up to no good in Possessed.

Possessed (1931)
This movie notched A’s for entertainment, acting, and photography; an F for plot; and a scrawled “bad” for moral effect. Those are surprisingly high marks, considering what was written in the comment section: “What are the moral standards of writers and producers when they produce a picture of this type. The story is awfully disgusting. We don’t want pictures of this kind.” So, let me get this straight. This viewer didn’t approve of a film that she nevertheless found “very interesting” in the entertainment department? Was she against fun?

An American Tragedy (1931)
You’re in for a special treat with this one. Apparently, news of An American Tragedy’s production so enraged the group that they penned a proclamation against the picture being made. In March 1931, Atlanta Better Films Committee President Mrs. Patrick Bray decreed:

It has come to our knowledge that there is again a movement to film Dreiser’s GREAT AMERICAN TRAGEDY, be it RESOLVED that the Better Films Committee of Atlanta protest against the filming of this book, RESOLVED FURTHER That we respectfully urge that we be given a definite promise that this book will not be filmed, and an assurance that the promise will be kept. RESOLVED FURTHER That a copy of these resolutions be sent to the Hays organization in New York and in Hollywood, and to the National Board of Review, in New York.

Also noted at the bottom, for an extra punch: “Passed unanimously at a meeting of over one hundred. Every civic organization represented. Six ministers present.” Spoiler alert: The movie was indeed produced and distributed, though it did thoroughly incense several people and groups, including author Theodore Dreiser (who sued and lost); the mother of the real-life murder victim Grace Brown (who sued and settled); and censor boards in Italy, England, and South Africa, which banned the film. Oh, and presumably the Atlanta Better Films Committee, too. 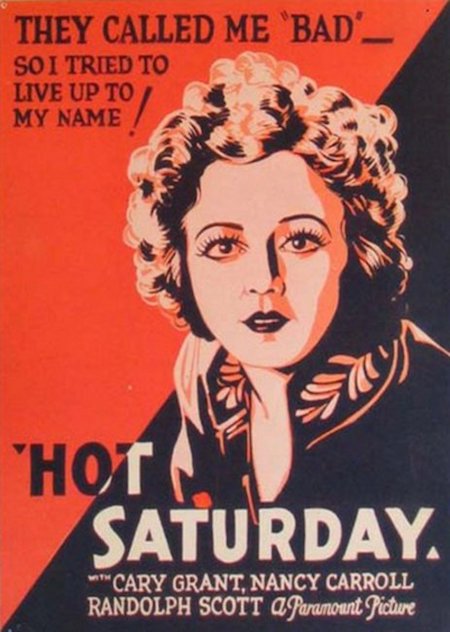 OK, I can see how this tagline may rub those of high moral standing the wrong way.

Hot Saturday (1932)
General comments for this selection were all over the place: “Comedy not recommended very course (sic) and suggestive all the way. Nancy Carroll plays a clean innocuous part of perhaps a happy, light-hearted girl. Very good lesson against gossip. Mother’s love was not what it should be. Lesson for girls innocent acts can be mis judged (sic). Avoid the appearances of evil.” Bad/good/educational/what?

Mata Hari (1932)
Mata Hari is another selection to only merit a check mark by “not recommended.” The comments for this one are among my favorite: “I wish this picture could be destroyed. It is not fit to be shown any where [sic].” I would have loved if this reviewer expanded upon the reasoning behind such a harsh condemnation.

How morally confused are some of those comments, huh? It’s ironic that most of the reviewers were able to grasp and even appreciate various facets of the motion picture experience – such as acting, entertainment value, photography – yet they totally got hung up on plot points they deemed objectionable. Interestingly, I failed to find mentions of the Atlanta Better Films Committee in publications past the late 1940s, which leads me to believe that the group eventually disbanded, was phased out, or something of the sort as their pursuits became more and more ineffective, just as happened with the Production Code in the later 1950s and 1960s.

Note: Researching this group was not easy. I found a number of mentions in the Media History Digital Library before landing upon Jennifer Fronc’s excellent Monitoring the Movies, which details the Progressive-era fight against state censorship in favor of the promotion of higher quality pictures. If you happen to have any further information on this group, please feel free to share in the comments!

4 Responses to Pre-Code Corner: A Look at the Atlanta Better Films Committee