Opera: Just as Fun as Swing!

Opera: Just as Fun as Swing!

If you’ve watched enough musicals from the 1930s and 1940s, you’ll find the issue of opera vs. swing popping up quite often. In Judy Garland’s first short film, Every Sunday (1935), MGM paired her with soprano Deanna Durbin in a sort of singing duel. Judy again engaged in a “singing duel” with operatic talent Betty Jaynes in 1939’s Babes in Arms. “I like opera!” Betty trilled, and Judy belted, “I like swing!”. Both girls give a different take on the famed opera “Figaro,” Judy in the hot swing style, Betty in the classical opera one. Later, in MGM’s beloved Andy Hardy series, Mickey Rooney (as Andy) is finally convinced of his classmate, Kathryn Grayson’s, talent when she sings both an operatic aria and a swingin’ modern tune at their high school graduation ceremony. In modern day, when people think of the great Hollywood musical, they think of films with contemporary songs such as Top Hat or Singin’ in the Rain. But what about the operetta? Who can forget Jeanette MacDonald and Nelson Eddy in Maytime or Kathryn Grayson and Howard Keel in Show Boat? The operetta may be a European form of entertainment, but it became part of the American theater and film scene when European immigrants such as Victor Herbert and Sigmund Romberg began to write new operettas in the 1910s through the early 1930s. Operettas are different from opera in that they are shorter and usually center on a light or humorous theme and typically have spoken dialogue. Some of the first composers of operettas began in the 1800s including Offenbach, Johann Strauss, and Gilbert and Sullivan.

Deanna Durbin and Judy Garland in 1935

Perhaps the greatest champion of the operetta in Hollywood was the legendary Louis B. Mayer, head of Metro-Goldwyn-Mayer. Under his studio’s aegis came the stars Jeanette MacDonald, Nelson Eddy, Kathryn Grayson, Mario Lanza, Howard Keel, and Jane Powell. While we are probably some of George Gershwin’s and Cole Porter’s biggest fans and have watched Gene Kelly and Judy Garland’s films more than we can count, we consider operatic stars and operettas just as valuable to the American film musical. As Deanna Durbin and Judy Garland sing together in Every Sunday, “Dance and make love to the sweet music of Americana!” If we take Judy and Deanna’s sung words (which we do indeed!), opera is just as much a part of Americana as swing.

1) Jeanette MacDonald was a star at Paramount before she came to MGM. She starred alongside Maurice Chevalier before pairing with Nelson Eddy from 1935-1942 and becoming MGM’s top diva. L.B. Mayer, who loved the opera, apparently had quite a crush on her and visited the sets of her pictures while he seldom visited the sets of other films being shot. With her spunky personality and vibrant red hair, Jeannette made opera anything but stodgy! She described herself with these words: “I’ve been told I have an Irish temper, I know I have Scottish thrift, and, like the English, I love a good show.”

2) Deanna Durbin, after being rejected by MGM in favor of Judy Garland in 1935, became Universal Studio’s biggest box office draw. Thanks to Hungarian producer Joe Pasternak, she was placed in vehicles perfectly suited to her talents, perhaps most notably in Three Smart Girls. She mostly played charming and resourceful girl-next-door types who also happened to know how to sing. “I couldn’t go on forever being Little Miss Fixit who burst into song…Just as Hollywood pin-up represents sex to dissatisfied erotics, so I represented the ideal daughter millions of fathers and mothers wished they had,” she said. She retired in 1948 and refused to give interviews for the rest of her life. Despite her extreme privacy, her legacy is still strong and she continues to endear audiences today.

The lovely and underrated Kathryn Grayson

3) Kathryn Grayson is arguably the most unsung of all the opera divas in musical film. Yet, she starred in three of the top grossing films of the 1940s and early 1950s: Thousands Cheer (1943), Anchors Aweigh (1945), and Show Boat (1951). Kathryn, like Deanna Durbin, became a star under the guidance of producer Joe Pasternak. She played common-sensical ingénues who were often trying to break into an opera career. Yet, her best role as the Shrew, Kate, in Kiss Me Kate was a departure from her usual roles, which she lamented were unchallenging and sometimes even “stupid.” She wanted to do intelligent movies with solid stories and music in tandem, but at the time she became a star, the operetta was fading in popularity.  This fact makes her success even more impressive. She was able to become a star against the odds. In 2001, when discussing the state of music and young people, she aptly noted: “You know they took music out of our schools. I’d like to go to Washington and see that they have music appreciation back in our schools because there weren’t gangs, there were no shootings back then. Somehow good music makes everybody happy. It can be very uplifting.”

1) Nelson Eddy began as an opera singer on the stage before being discovered and making his debut with Jeanette MacDonald in 1935’s Naughty Marietta. He is one of the few operatic movie stars to be considered truly talented by “opera purists” and mainstream audiences alike. Like Jeanette MacDonald, he was a redhead (though his hair photographed as blond), but he did not have quite the feisty onscreen persona as she. Nevertheless, he came across as masculine and handsome, qualities that made him different from the archetypal, rotund and middle-aged male opera singer caricatured by Lauritz Melchior in films like That Midnight Kiss (1949).  Eddy was never impressed with his film career and preferred stage work. When asked why he never watched his own films he declared: “I was too ashamed of them.”

2) Mario Lanza, often dubbed the World’s Greatest Tenor or The Next Caruso had a short but brilliant career. He came to MGM as an overweight, rough-around-the-edges tenor from Philadelphia. Kathryn Grayson made it her mission to get him into shape so he could be her leading man in 1949’s That Midnight Kiss. Of all her co-stars, she claimed his voice and hers matched best. He became an overnight sensation in That Midnight Kiss and succumbed to “swelled head syndrome.” He became a temperamental and difficult star who was almost impossible to work with. He died in 1959 of heart failure (many believe this was due to the extreme ups and downs of his weight). Even though undependable on the sets of his films, he felt passionately about his work. He stated: “I sing each word as though it were my last on earth.” 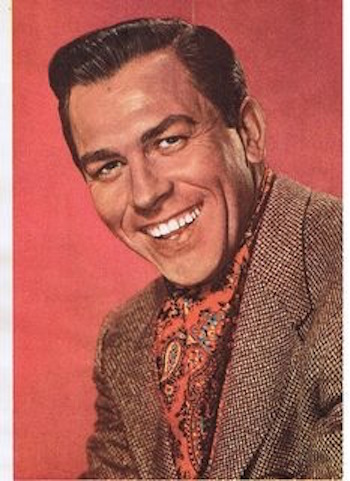 3) Howard Keel, unlike Lanza, was a baritone. The 6’4” actor began as an airplane mechanic before Oscar Hammerstein II discovered Keel during an audition for the stage show, Carousel. He was hired as an understudy for the role of Curly in the stage version of Oklahoma! and soon after made his musical film debut in the highly successful Annie Get Your Gun (1950). He usually played cocky, confident, take charge types who sometimes came off as heels—but likeable heels. Among his most iconic films were those with Kathryn Grayson, Show Boat and Kiss Me Kate. He is also famous for playing the lead in Seven Brides For Seven Brothers. In his memoir, Howard, who always had a zest for life, wrote: “If everything in life always went smoothly, it would be a bloody bore. You know, people say, “Wait and go to heaven”. Well, if heaven’s like they claim it is, I don’t want to go. I’d get bored.”

This entry was posted in Posts by Sara and Cynthia Brideson. Bookmark the permalink.