The first shot in Mildred Pierce starts innocently enough. Serene, even. Accompanied by the soothing sounds of ocean waves and the soft musical soundtrack, we take in the sight of an impressive beach house on the side of a California highway. But we’re not allowed to get accustomed to the scene – the tranquility is abruptly interrupted by a series of rapid-fire gunshots and the close-up of the recipient of those gunshots. Courtesy of the off-screen shooter, the now-empty gun is tossed unceremoniously in the direction of the dying victim, who utters just one word: “Mildred.”

Another film with a peace-filled opening that’s obliterated by gunfire. This time, the camera leads us across the grounds of a rubber plantation in Singapore. We see sap dripping from a tree and spy on the workers – some are playing music, some are amusing themselves with a board game, most of them are drowsing in a series of hammocks, surrounded by Asian-inspired music. We hear a sudden shot and see a man stagger from inside the plantation’s main house onto the front porch. Unlike in Mildred Pierce, though, we know exactly who’s doing the shooting. Close behind the man is a woman holding a gun, who repeatedly fires bullets into him, her face completely expressionless, not stopping until the gun is spent. Only then does she let it slide from her hand.

As the first scene begins, we watch as a car careens wildly through the night streets of Los Angeles – running a red light here, nearly causing an accident there – until it finally arrives at its office building destination and the driver emerges. When he’s let inside by the doorman (at least, I guess that’s his job), we learn that his name is Mr. Neff, that he’s in the insurance business, and that he doesn’t appear to be in tip-top shape. (“You look kinda all-in at that,” the doorman observes.) We begin to see what the watchman sees: Neff’s coat is draped at an odd angle, and he walks slowly, almost too deliberately as he makes his way to his office. Once there, he sheds his coat, but it’s not until he turns on his desk lamp that we see he’s got a bullet hole in his shoulder, the blood from which has stained the pack of cigarettes in his pocket. After lighting one, he uses his good arm to set up his Dictaphone and begins to verbalize an office memorandum to his boss, during which he confesses to a man’s murder: “I killed him for money. And for a woman. And I didn’t get the money and I didn’t get the woman. Pretty, isn’t it?”

Besides Sunset Boulevard, there aren’t many films – none, in fact, that I can think of – that begin with a voice-over narration from a dead guy floating face-down in a pool. Oh, we don’t know at first who’s doing the talking – what we see is a caravan of cars speeding down a palm tree-lined highway, sirens blaring, as they head toward the scene of a homicide. The crime, we’re told, took place at the home of one of those old-time Hollywood movie stars – and the victim, who sustained two gunshots in the back and one in the stomach, was a movie writer with a couple of ‘B’ pictures to his credit. As a collection of cops and news reporters arrive on the scene, we see the beneficiary of the fatal shots, but we don’t yet know who he is, nor why – or at whose hand – he came to this ignominious end. We don’t even connect him with the man telling us the story. “The poor dope,” the voice intones, “he always wanted a pool. Well, in the end he got himself a pool. Only the price turned out to be a little high.” 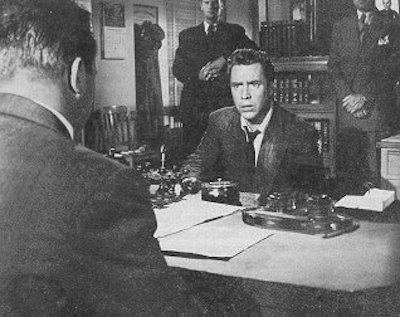 It’s nighttime. We see a man standing still outside a building, hesitating for a moment before he heads toward the structure. As the opening credits roll, we follow him as he walks purposefully down a hallway and we realize (from the helpful signage) that he’s on his way to a police department. He pauses briefly to receive directions from a couple of uniformed cops, then journeys down another seemingly endless hallway, accompanied by a score that grows increasingly more dramatic with every step that he takes. He finally reaches his destination – the Homicide Division. He asks to see the “man in charge,” and is taken to an office where he shares with two detectives that he’s there to report a murder. It took place in San Francisco on the previous evening, he tells them. “Who was murdered?” one of the cops inquires. And, for the first time, we see the man’s face, in a close-up, as he responds: “I was.” (Dun dun DUN!!!!!!!!)

Talk about great beginnings! Stay tuned for a future Noir Nook column where I’ll take a look at another five films noirs with memorable opening scenes. And in the meantime, have a great 2018!!

This entry was posted in Noir Nook, Posts by Karen Burroughs Hannsberry. Bookmark the permalink.