Christmas Holiday is a 1944 noir starring Deanna Durbin as a devoted young bride who slowly comes to realize that her husband, played by Gene Kelly, is a charming sociopath and killer. The cast includes Gale Sondergaard as Kelly’s mother, who will stop at nothing to protect her baby boy. 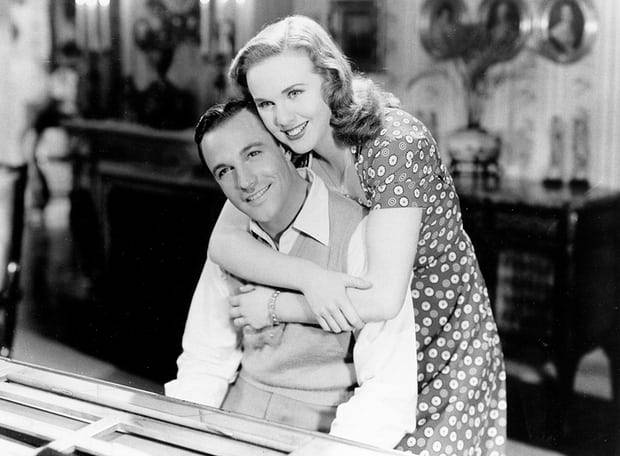 In celebration of the holiday season, this month’s Noir Nook serves up five things you need to know about this interesting and underrated noir.

1. The film is loosely based on the 1939 book by the same name by W. Somerset Maugham. The movie retains the names of the two of the main characters from the book, Charley Mason and Simon Fenimore. In the book, Charley is a Cambridge University grad who looks up his school chum, Fenimore, during a visit to Paris at Christmastime. In the film, Charley is a jilted soldier who is introduced to Fenimore when his plane to San Francisco is forced to land in New Orleans. Several other Maugham novels were made into movies, including Of Human Bondage (1934), The Painted Veil (1934), and The Razor’s Edge (1946).

2. The screenplay was penned by Herman J. Mankiewicz, brother of writer-director Joseph Mankiewicz, and grandfather of TCM host Ben Mankiewicz. Herman changed the setting of the film from a Paris brothel to a New Orleans nightclub and changed the name and occupation of the main character from prostitute Lydia to singer Jackie Lamont. Mankiewicz wrote or co-wrote the screenplays for a number of popular films, including Dinner at Eight (1933), The Wizard of Oz (1939), Citizen Kane (1941), and The Pride of the Yankees (1942). After years of heavy drinking, Mankiewicz died from uremic poisoning at the age of 55.

3. Famously acerbic New York Times critic Bosley Crowther was not a fan of the film, labeling it a “moody and hackneyed yarn,” and was particularly disparaging of Deanna Durbin’s performance. He seemed to be disappointed that the film wasn’t a musical, pointing out that Durbin “sings two numbers only,” and wrote that her speaking voice was “girlish and empty of quality.” He concluded that it was “really grotesque and outlandish what they’ve done to Miss Durbin in this film.” (Geez. Tell us how you really feel, Bos.)

5. The character of Simon Fenimore was played by Richard Whorf, who can also be seen in Midnight (1934), Yankee Doodle Dandy (1942), and Keeper of the Flame (1943). Whorf was truly a Renaissance man. He directed such films as Till the Clouds Roll By (1946) and Champagne For Caesar (1950), produced two Natalie Wood starters, The Burning Hills (1956) and Bombers B-52 (1957), and wrote or directed episodes of several TV shows, including The Beverly Hillbillies and My Three Sons. He also won the 1954 Tony Award for Best Costume Designer for Ondine, which starred Mel Ferrer and Audrey Hepburn. 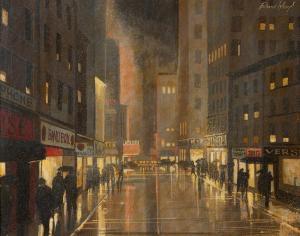 A painting by Richard Whorf at only age 15!

Finally – and most personally fascinating to me – he was an excellent painter. He sold his first painting for $100 when he was 15 years old. “Who says,” Whorf asked a reporter in 1963, “that a man has to do one thing?”

6 Responses to Noir Nook: Five Things You Need to Know About Christmas Holiday (1944)