Musicals aren’t just about singing and dancing… deciding what a performer is going to wear during a musical number is also an important factor in bringing a scene to life.

Simply put, if an actor is singing and dancing about the glorious sunshine, they would be dressed in a way that matches the happy tone of the performance.

Costumes also (hopefully) need to be functional as well, so that the performer can easily move – whether they are swimming, tap dancing or leaping onto a platform.

Many of Hollywood’s top designers created costumes, not only for dramas, but for musicals too. Here are some of my favorite musical costumes by some of Hollywood’s best designers: 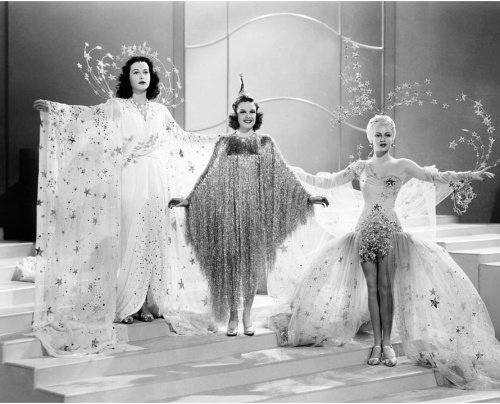 His full name was Adrian Adolph Greenberg, but he took the professional name Gilbert Adrian, and was always billed simply as “Adrian.” Adrian was a top costume designer and created some of the most luminous and lavish gowns.

It’s hard to pick just one favorite film featuring Adrian’s costume designs, but Ziegfeld Girl (1941) is among my favorites. The film focuses on show girls who were cast in Broadway shows produced by Florenz Ziegfeld. Starring Judy Garland, Lana Turner and Hedy Lamarr — and a bevy of chorus girls played by actresses such as Eve Arden — the Ziegfeld Girl performers were expected to be the epitome of glamour. To produce this effect, Adrian created ethereal costumes, with elaborate headdresses and designs. The most famous of these would be Hedy Lamarr’s gauzy dress, donned with stars all over the gown, on her head, and coming from her back. 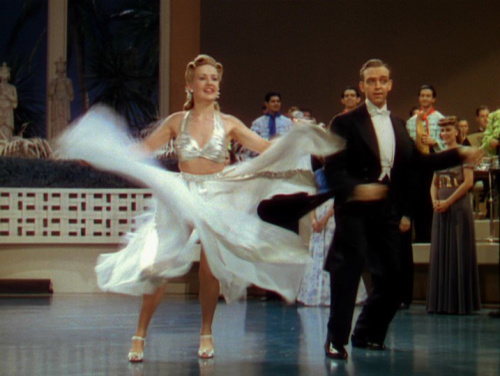 Travis Banton was Paramount’s top designer; he also occasionally designed for 20th Century Fox and Universal. Banton is responsible for my favorite musical film costumes — which are featured in Moon Over Miami (1941). Clothes are an important part of the plot: Betty Grable is posing as a millionaire so a real millionaire will fall in love with her — so that she and her sister (played by Carole Landis), and aunt (played by Charlotte Greenwood), can live comfortably. Every gown Grable wears is gorgeous and also functional so that she can break into a song and tap number: from a blue and white dress with blue stars, to a two-piece with a silver crop-top and a frothy white skirt. Banton made Grable look like the all-American sweetheart that she was, while also glamorous enough to be a millionaire. 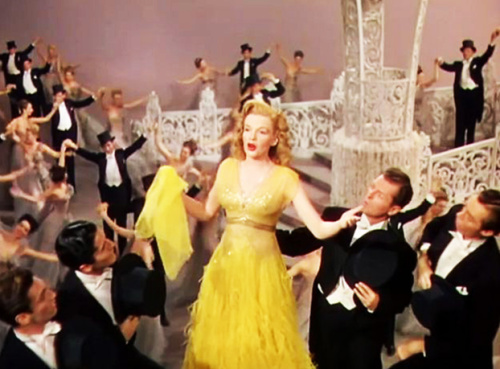 Till the Clouds Roll By (1946), costumes by Helen Rose

Helen Rose’s designs had an almost unassuming glamour that other designers lacked. Her designs usually were vibrant in color, frothy, and all of her gowns were ultra-feminine. Rose is one of my favorite designers, so it’s difficult to pick just one favorite film. However, Till the Clouds Roll By (1946) showcases Rose’s costumes to the hilt — with 20 of MGM’s top stars and 28 musical numbers. The film is a biographical musical about Jerome Kern (played by Robert Walker) and features so many of Kern’s Broadway shows throughout the film. From a vibrant yellow gown with yellow feathers on the skirt for Judy Garland, to Kathryn Grayson’s period costumes for a Show Boat medley, each costume is vibrant and colorful. 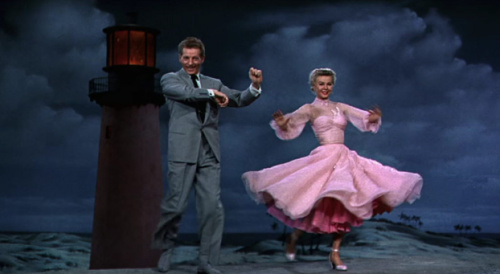 Edith Head is considered one of Hollywood’s top designers. She created costumes for so many of Hollywood’s most acclaimed films, including one of my favorites, White Christmas (1954). Not only do Rosemary Clooney and Vera-Ellen wear gorgeous gowns – Vera-Ellen’s frothy pink evening gown while dancing to “The Best Things Happen While You’re Dancing” and Rosemary’s scalloped black evening gown for “Love You Didn’t Do Right By Me” – but also pay close attention to what the men are wearing… Head particularly liked costuming men, partly because they didn’t have “temperament,” and also because the use of Technicolor allowed her to be more creative with fabrics. In one scene, Head dresses Danny Kaye in all grey – a grey suit, grey socks and grey suede shoes. In another scene, Bing Crosby wears bright yellow socks, which we know Head costumed intentionally. 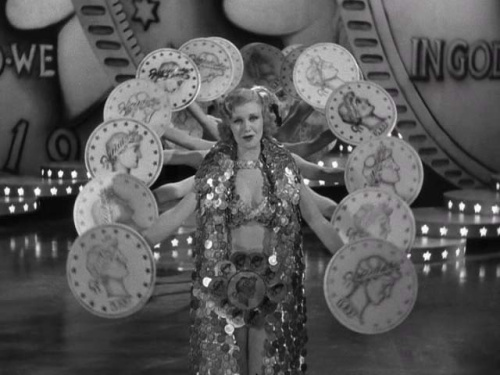 Director and choreographer Busby Berkeley created outrageous and elaborate sets and dance numbers. Designer Orry-Kelly was able to match Berkeley’s eccentric style and ideas with his costumes. Orry-Kelly created costumes for nearly all of Berkeley’s musicals, but the one I want to mention here is Gold Diggers of 1933 (1933). These costumes were specifically designed with the musical numbers in mind. “We’re in the Money” literally features chorus girls wearing coin tops and skirts, with a cape made of coins. It is one of the wildest costumes I’ve ever seen in a musical. In the “Shadow Waltz” number, all of the dancers are in bizarre, hoopskirt-like dresses as they play violins. All of Kelly’s costumes match the lavish numbers perfectly.

What is your favorite costume in a movie musical?

One Response to Musical Interlude: Costume Design for Musicals