“I’ve worked with practically every star in the business and I’ve had all the excitement without any of the crushing responsibilities.”
-Arnold Stang 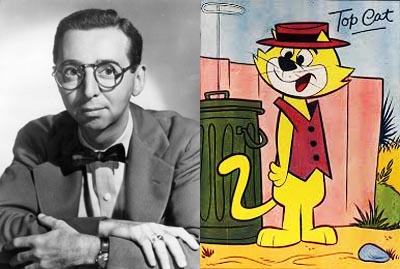 Arnold Stang as himself and as Top Cat

Top Cat, the most effectual
Top Cat, who’s intellectual
Close friends get to call him T.C.
Providing it’s with dignity
Top Cat – the indisputable leader of the gang

He’s the boss, he’s the pip
He’s the championship
He’s the most tip top
Top Cat

Yes he’s the chief, he’s the king
But above everything
He’s the most tip top
Top Cat