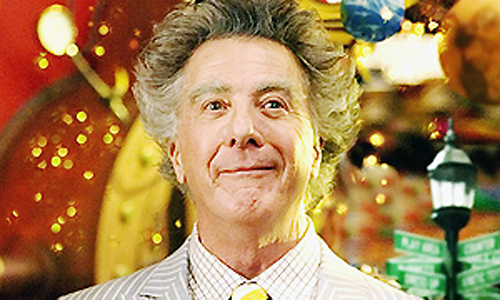 Where Is He Now?

It’s easy to answer the question “where is Dustin Hoffman now?” since he hasn’t stopped making movies at all. Since 1985, Hoffman has appeared in at least one movie every year (except for one: 2000). 1997, in particular, proved to be a big year for Hoffman. He was awarded the Golden Globe’s Cecil B. Demille Award, which is an honorary Golden Globe for “outstanding contributions to the world of entertainment.” He was the 45th recipient of the award, winning the year after Sean Connery and the year before Shirley MacLaine. That year, for his performance in Wag the Dog, he also received his seventh Academy nomination for Best Actor.

In 2004, Hoffman would appear in five different movies: Freedom2speak v2.0, Finding Neverland, I Heart Huckabees, Meet the Fockers, and Lemony Snicket’s A Series of Unfortunate Events. For Finding Neverland, he was included in the nomination for Outstanding Performance by a Cast in a Motion Picture by the Screen Actors Guild. For his role as Bernie Focker in Meet the Fockers, he was awarded the MTV Movie Award for Best Comedic Performance. While the MTV Movie Awards really mean little to nothing in my opinion…it’s still something.

And then, in 2007, Hoffman appeared in, what I personally believe, is one of the best children’s movies of all time: Mr. Magorium’s Wonder Emporium. Hoffman plays the eccentric Mr. Edward Magorium, and it’s unlike anything I’ve ever seen before. If you look back up at the picture posted above, you’ll see Hoffman as Mr. Magorium. It’s amazing, and while it may be a silly movie, I recommend that everyone see it.

2008 was an easier year for Hoffman as he never actually appeared on-screen in any movie but instead lent his voice to three animated films: Kung Fu Panda, Horton Hears a Who!, and The Tale of Despereaux. Being the most successful of the three, Kung Fu Panda gave Dustin Hoffman the Annie Award for Best Voice Acting in an Animated Feature Production. He would go on to reprise his role as Master Shifu in the sequel, Kung Fu Panda 2, which appeared in theaters in 2011.

In 2011, Hoffman also appeared in the HBO television series, Luck, which was recently cancelled. Hoffman played the lead role as Chester “Ace” Bernstein, a lifelong mobster who has recently been released from a three year prison sentence.

For the future, Hoffman is rumored to appear in possibly three movies: The Song of Names with Anthony Hopkins; Very Good Girls with Anton Yelchin and Dakota Fanning; and The Giver with Jeff Bridges. All three are in the pre-production stage so nothing is completely confirmed, but either way, you can expect Hoffman to appear in at least one film during 2012. Can’t wait!