Like the pretty much all of the art in 1920s Germany, Expressionism dominated German Cinema. Before WWI, the German Film Industry lagged behind countries such as the US, France, and Italy due to its lack of innovation and primitive story-telling. After the war the German Government (now called the Weimar Republic) consolidated most of the industry into the state-sponsored production company UFA (Universum-Film AG). The government then quickly instituted a ban on the importation of foreign films in hopes of further developing their own industry. This, of course, caused a high demand of German films within Germany, basically meaning their plan worked. Although UFA initially produced large-scale costume dramas as means of provided breads and circuses to their downtrodden citizens, it soon became apparent that the German people did not want mindless entertainment to distract them from their lives. Rather than escapism, the German people wanted Expressionism – a means of seeing their own fragile collective psyche portrayed on the screen. The best example of this came along in 1920 when little independent studio called Decla produced the film The Cabinet of Doctor Caligari. 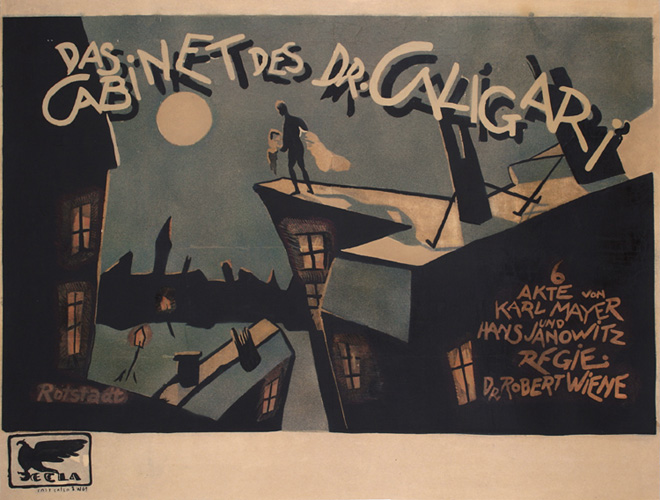 The Cabinet of Doctor Caligari was written by a couple of World War I vets named Hans Janowitz and Carl Mayer. Needless to say, they were severely psychologically scared from their time in the trenches and channeled their horrific wartime experiences and deep-seeded distrust in authoritarian leadership into the film’s screenplay. The story follows Francis, who recalls his horrifying experiences when a Carnival and the titular character, Dr. Caligari, strolls into town. Caligari is power-hungry, calculating and posseses the great gift of gab. He is easily able to lure in audiences with his powerful presence and captivating showmanship. He is representative of German Leadership – both brutal yet awe inspiring, using their power to manipulate those under their jurisdiction. The somnambulist (a sleepwalker), Cesare, who is under the control of Dr. Caligari, can be seen as the German solider; forced to carry out the evil deeds of his master with no agency of his own – adrift in world that has lost all reality. These themes where brought to life through the masterful direction of Robert Wiene.

Like the painting of Otto Dix, Wiene did not concern himself with creating a realistic portrayal of the physical world. Instead, he wanted to delve into psyche of the characters, characters that represented the collective malaise of the German people. The film could pretty much be considered the anti-Hollywood in its visual style. Everything from the screenplay to the sets and even the title cards were done in way to challenge modernism’s highly formal elements and need for objective realism.

For real, you ever see a title card as angsty as this…

To create the dark and unsettling world of Dr. Caligari, Weine hired two Expressionists painters as the film’s set designers. Rather than reaching for the verisimilitude of the world, the painters used Expressionism to distort perception. They opted to paint many of the background props and cityscapes rather than build them, as was normal practice of the time. The result was a world of crooked landscapes, starkly painted shadows that cast irregular patterns on the walls and ground with little concern of its light source. Jagged edges of a town that seemed to taper into nothing and rooftops seemed to bleed into bridges. The world of Caligari simply did not look like the “real world” but that was point of it all. As mentioned in my last German Expressionism post, the zeitgeist of German at this point was not a happy one. People were full of anxiety about the future, anger about past and confused about the present.

I , for one, don’t think even google maps could help me navigate through this town…

The narrative structure and morose stylization was something the world had yet to see in film and The Cabinet of Dr. Caligari became an international hit. It was clear German had something completely new to offer the film world with films such as The Golem: How He Came Into the World, and Dr. Mabuse: The Gambler soon followed Dr. Caligari’s stylish lead. Despite Germany’s fumbling economy (people were using the German mark as wallpaper, it was so worthless), the film industry boomed. The hyperinflation of the mark during the Weimar Republic made it so cheap to export films to foreign markers that everyone and their mother countries were buying films. It quickly went from a struggling, primitive industry to Hollywood’s main competitor on the world stage. Over the next 10 years, classic such as Nosferatu, Metropolis, The Man Who Laughs and M would all become not German Expressionist masterpieces, but legends in hall of cinema itself.

But like all great movements, this one also came to end. On January 30, 1933 Germanay named Adolf Hitler as their Chancellor and like that, the Weimar Republic was over and something new, and insidious came to take its place. The time of art that questioned their government and its moral failures was over. It wasn’t long before Propaganda ruled the cinema of Germany, goose steps replaced crooked steps  and expressionism would be all but outlawed…stupid Nazis.